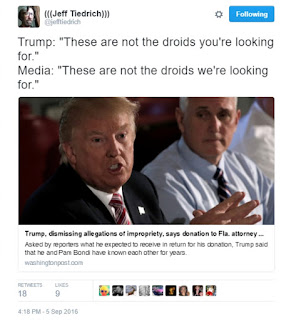 It's time for Donald J. Trump to say some new, outrageous thing, some bright, shiny thing, something the press can cuddle and play with for days on end, something that will take and keep their attention far, far from Trump scandal number the eleventy-leventh. Like this scandal that's been quietly steaming for months while the press obsesses over the latest non-revelation about Hillary Clinton's emails:

Donald Trump on Monday dismissed questions about his failure to disclose an improper $25,000 contribution to a political group connected to Florida Attorney General Pam Bondi, who was at the time considering whether to open a fraud investigation against Trump University.

The $25,000 gift, paid by the Donald J. Trump Foundation, violated federal rules that prohibit charities from making donations to political candidates. Trump and his team also failed to disclose the large gift to the Internal Revenue Service, instead reporting that the donation was given to an unrelated group with a similar name — effectively obscuring the contribution.

Bondi eventually declined to open a fraud investigation into Trump University's dealings in Florida. The fact that a consultant for Bondi's reelection directly contradicts Trump's account — telling the AP Bondi solicited funds directly from Trump — seems not to have created much press ripple. And Donald, exactly how many attorneys general turned down prosecuting cases against you? In addition to the one in Texas.

This is the same Trump who boasted a year ago that when politicians call, he gives, and when he wants, he gets. They have no choice, he declared. Because he gave. If the quo is not stated, it is at least implied, and it's clearly there in Trump's mind:

Paul Waldman has had about enough of the double standard for covering Trumpish scandals:

At this point we should note that everything here may be completely innocent. Perhaps Bondi didn’t realize her office was looking into Trump University. Perhaps the fact that Trump’s foundation made the contribution (which, to repeat, is illegal) was just a mix-up. Perhaps when Trump reimbursed the foundation from his personal account, he didn’t realize that’s not how the law works (the foundation would have to get its money back from Bondi’s PAC; he could then make a personal donation if he wanted). Perhaps Bondi’s decision not to pursue the case against Trump was perfectly reasonable.

But here’s the thing: We don’t know the answers to those questions, because almost nobody seems to be pursuing them.

For instance, there was only one mention of this story on any of the five Sunday shows, when John Dickerson asked Chris Christie about it on “Face the Nation“ (Christie took great umbrage: “I can’t believe, John, that anyone would insult Pam Bondi that way”). And the comparison with stories about Hillary Clinton’s emails or the Clinton Foundation is extremely instructive. Whenever we get some new development in any of those Clinton stories, you see blanket coverage — every cable network, every network news program, every newspaper investigates it at length. And even when the new information serves to exonerate Clinton rather than implicate her in wrongdoing, the coverage still emphasizes that the whole thing just “raises questions” about her integrity.

The sheer volume of Trump corruption stories is incredible. They're all covered for a few days and then dropped: https://t.co/oM1BeVwcX9

Ah, yes. "Raises questions." The optics are bad. Eric Boehlert of Media Matters spoke to the press obsession with "optics" and the Clinton Foundation:

The meandering foundation story has become a case study for the Beltway media’s double standard: holding Clinton to a higher mark that’s based on optics, not on facts. Unable to prove misconduct or anything close to it (just ask the AP), the press relies on the comfy confines of “optics” and the “appearance” of conflict to allow them to attack Clinton and the foundation.

For Clinton, it’s a can’t-win proposition. If the press says the story looks bad, even if there’s nothing to suggest it actually is bad, she gets tagged with an optics problem. And because journalists are the only ones handing out the grades, they get to decide how bad it looks.

But the journalism malpractice doesn’t end there. It extends to the fact that the press doesn’t apply the same visual test to Republican nominee Donald Trump, whose far-flung business dealings would represent an actual, even historic, conflict of interest were he to be elected president.

Also, note that high-profile Republicans have run foundations in the past, accepted big donations, and never been hounded by the press regarding supposed optics violations.

What’s so strange about the current “appearance” phenomenon is that the narrative often runs right alongside media concessions about the lack of evidence proving Clinton wrongdoing.

So, is this Bondi affair an actual case of pay-for-play with Trump getting a fraud investigation quashed for a donation? "Gee, Phil, that really doesn't pass the smell test," said no one on a Sunday bobblehead show about Trump's illegal donation to Bondi. But when it comes to the inevitable "throw something against the wall to see what sticks" controversy raised against Clinton by Trump’s new deputy campaign manager, David Bossie, it will be Clinton Rules 1, 2, and 3.

Waldman concludes with a list of a dozen Trumpish cases of "corruption, double-dealing, and fraud" that get brief mention in the press, then it's back to full-tilt coverage of whatever editors decide "looks bad" for Clinton:

That’s important, because we may have reached a point where the frames around the candidates are locked in: Trump is supposedly the crazy/bigoted one, and Clinton is supposedly the corrupt one. Once we decide that those are the appropriate lenses through which the two candidates are to be viewed, it shapes the decisions the media make every day about which stories are important to pursue.

When will the press finally stop "raising questions" for which the only answer is more innuendo and quit fixating on the "optics" of whatever it is alleged Hillary Clinton didn't do (that she should have known better not to look like she did when she didn't) and actually squeeze out some balance with their balance?

In "working the refs," conservatives like to hammer on the fact that members of the press tend to lean left. They have trained the press to counter those accusations with closer scrutiny of Democrats' appearances of improprieties than Republicans'. But there is another dynamic at work, born of the same leftish skew among members of the press. We expect our own to adhere to a higher standard than conservatives. We don't expect the right to live up to those standards, and they don't disappoint us when they don't. But when appearances (even false media ones) suggest people like the Clintons have fallen short, we're on a hair trigger for throwing them under the bus. Dirty tricksters on the right know this and exploit it as a weakness. And like George McFly, we keep falling for it.