Who will reform U.S. policing? by @BloggersRUs

Who will reform U.S. policing? 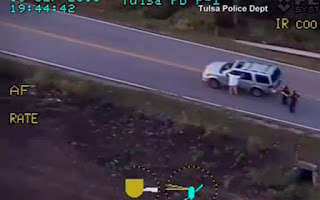 Responding to the video of police in Tulsa shooting and killing unarmed, black motorist, Terrence Crutcher, a former reporter I know wrote yesterday on Facebook:

I will never, ever forget the words of an African-American man I was interviewing a few months ago as he talked about being stopped for a traffic infraction with his wife in the car.

The officer approached the car he said, and he could see in his mirror that he had unlatched his holster and had his hand on his gun. My subject knew this probably was just procedure, but it affected him -- terrified him.

He started weeping. "Please don't kill me, sir, please don't kill me," he repeated, sobbing uncontrollably. I knew then and I still say he was not over-reacting. He had every right to be terrified, and this is why I thank Colin Kaepernick for his courage.

That was yesterday morning. Last night, another fatal police shooting of a black man. This one in Charlotte:

The shooting took place Tuesday afternoon after officers arrived at an apartment complex in the city of Charlotte at about 4 p.m., searching for a suspect who had an outstanding warrant, a police statement said.

Police said the man fatally shot, identified as Keith Lamont Scott, was not the suspect officers were searching for, but had exited from a vehicle with a firearm and the officers believed he posed an imminent deadly threat.

Scott's family quickly challenged the police account of the fatal shooting, saying he was not armed and that he was holding a book and waiting for his son to be dropped off from school, WSOC-TV reports.

Police say the man was armed and they recovered a weapon at the scene. CMPD is still on scene investigating @wsoctv

One candidate for president strikes a pose: get tough. Another has a plan, as Bill Scher explained at Campaign for America's Future:

Yet we cannot easily compare the policy visions of the two major party candidates. One reason is that the phrase “flip-flop” doesn’t begin to describe Republican candidate Trump’s willingness to reverse himself when convenient, contradict himself within minutes and serve up word salad to avoid taking clear stances.

Another reason is that only one candidate is bothering to offer a comprehensive set of policy proposals.

As the Associated Press reported, “Trump’s campaign has posted just seven policy proposals on his website, totaling just over 9,000 words. There are 38 on [Democratic candidate Hillary] Clinton’s “issues” page, ranging from efforts to cure Alzheimer’s disease to Wall Street and criminal justice reform, and her campaign boasts that it has now released 65 policy fact sheets, totaling 112,735 words.”

The policy fight is a mismatch. You can’t beat something with nothing. And on many fronts, Trump is literally offering nothing.

Effective policing and constitutional policing go hand in hand. We can—and must—do both by:

Channel 9 is continuously updating this story and has LIVE updates from reporters on #Daybreak: https://t.co/eKVghitUKf #WakeUpWith9 pic.twitter.com/vncG9HaVs3


Or we could just "get tough"and see how that works out.