"Blunt force trauma with a loud, orange object" by @BloggersRUs 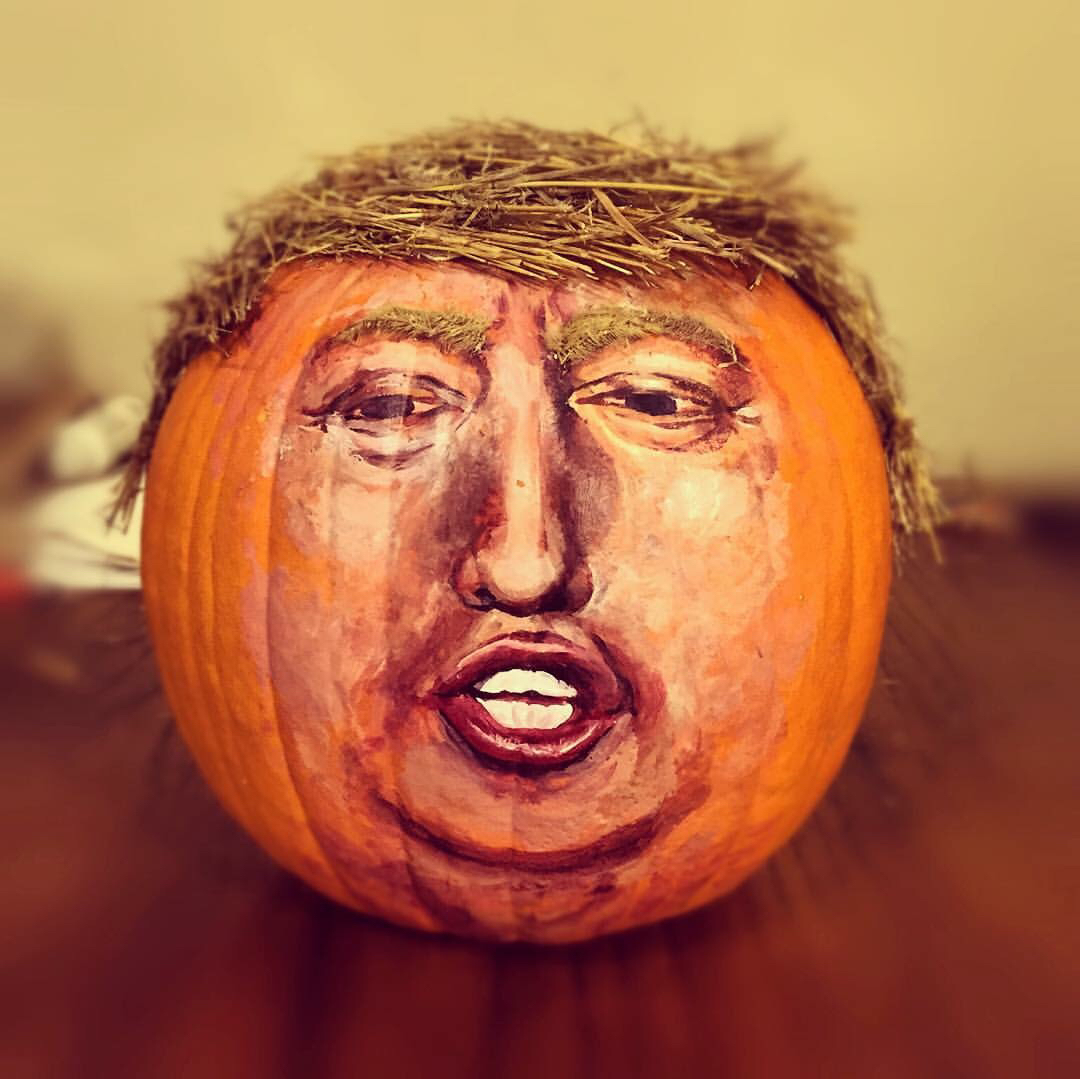 The Republican Party's post-mortems have already begun. Cause of death: "blunt force trauma with a loud, orange object." So writes Julia Ioffee in Politico.

The candidacy of Donald Trump has exposed much of conservative ideology as as much a Potemkin village as Trump's campaign. Free trade and supply-side economics were only the lipstick applied to a much uglier Republican base. The neocons have "broken off," says conservative political scientist and commentator Peter Berkowitz. Gen-X "reformicons" who might have been the party's ideological future now see older party pragmatists willing to go along to get along as "collaborators." Mike Pence has disgraced himself in their eyes:

With less than two weeks until election day, this is what Republican agony sounds like. “I’ve never seen so many really smart people at a loss for what to do,” says the head of one prominent conservative think tank. “They’re pulling their hair out, to the extent they have any hair left.” Douglas Heye, a former RNC official and Eric Cantor staffer, rejects the word “collaborator.” “I don’t like that language. I don’t think it helps,” he told me. “I’ve been watching a French TV series about World War Two, and now I’m watching the part about the aftermath of the war where they’re trying to figure out who’s a collaborator, shaving women’s heads, etc.” The echo scares him. “I would like to see us sort out our difference in non-punitive ways,” he says.

The task ahead to salvage what is left of the party is daunting. Pete Wehner, a senior fellow at the conservative Ethics and Public Policy Center, is apalled by what Trump's candidacy has revealed:

“The ugliness of those forces is real. The number of people who supported Trump is alarming. It turned out that those forces within the Republican Party were larger than what I had imagined.” He sees “a moral necessity” to hand Trump a humiliating defeat and to scrub out the uglier things he brought to the surface of American politics. But, like Soltis Anderson, he recognizes that splitting the two may prove a Solomonic task. “Is there a way to repudiate the worst of Trump—the nativistic, racist, misogynistic elements—and appeal to people whom he brought because of economic anxiety?” he asked. “It won’t be easy because he has loyal following. If you morally repudiate him—which has to happen—those people may decide they don’t want to be part of that.”

That economic anxiety is real. Neither party has adequately addressed it. Free college and debt forgiveness might appeal to millennials, but what of the working-class? Neither party has yet to address their concerns both for themselves and for their grandkids.

While I was electioneering the other day, a Republican candidate tried to start a debate over what to do about the changing economy. Automation is reducing the number of people needed to produce goods, he observed. He hinted at the same, old GOP concerns about government supports engendering dependency, and people needing incentives to work. But Republican orthodoxy either places blind faith in entrepreneurship as a cure-all, or consigns those without the gene for it to the ravages of social Darwinism. What do you do with all those people, I asked, how do we as a society adjust to a world in which there are no jobs for a large portion of 7 billion people? Thus ended the "debate." It is a question David Atkins has addressed here and here, and one which neither Republicans nor Democrats have yet engaged.

But getting back to the Republicans' conundrum, Grover Norquist argues (unintentionally in a Monty Pythonish way) that the GOP is not dead yet. As much as I hate to cite Norquist, he makes a point that too many progressive non-activists fail to grasp about the importance of down-ballot races for their futures:

“Back up and look at the map of 50 states,” says Grover Norquist, head of Americans for Tax Reform, the activist who has badgered hundreds of Republican politicians into signing a pledge never to vote for tax increases. “There are 31 states with Republican governors. Thirty-one where we have both houses of legislature; twenty-three where we have both houses of the legislature and the governorship. The Democrats have all of seven states where they have all three. That is a depth of Republican strength that is enduring. We really ought to have 60 senators on a bad day. The focus on the Presidential race alone give people a strange view of the miracle strength modern Republican Party.”

Miracle or not, those of us in states recently taken over by Republican and T-party legislatures know what damage this wounded party can still do. Damage neither President Hillary nor President Bernie can wipe away by executive action. Winning the hearts and minds of voters and regaining lost trust is a project both Republicans and Democrats need to undertake. The left will have to get over its fixation on the White House and focus more on the state house. For Republicans, Ioffee writes, repairing internal rifts will be harder if the "loud, orange object" starts a media company with a business model based on keeping the wounds open. He could prevent "Trump fans, the stand-pat establishment, and the conservative Jesuits" from resolving their differences.

Tough being you. But can Democrats do better?