Trump's something for nothing by @BloggersRUs

Trump's something for nothing 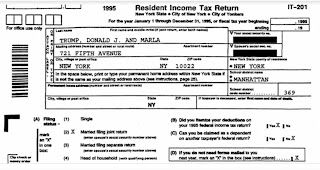 Donald Trump knows the U.S. tax code so well he could probably resolve the national debt by finding a clever way to write it off.

One year of Trump’s tax returns were just revealed. Now we know why he won’t release the rest. https://t.co/oKAhwq8Yrn pic.twitter.com/sEwWNf4mrr

The New York Times' Susanne Craig last month received an envelope in the mail containing pages from Donald Trump's 1995 federal tax return. (Craig has written in the past about Trump's finances.) That year Trump claimed more than $900 million in losses. The envelope contains a return address purporting to have come from Trump Tower. It appears, says Think Progress, Trump has a mole:

That means Trump could have made over $50 million a year for nearly two decades and paid nothing in federal taxes. (The I.R.S. lets taxpayers apply loses for up to 18 years to offset future and past income.)

The losses stem from “a dizzying array of deduction, business expenses, real estate depreciation, losses from the sale of business assets and event operating lawsuits” that flow from various entities control by Trump to his “personal tax returns.”

Trump's assets at the time were "hemorrhaging money," according to the Times.

Trump is the first presidential candidate in decades to refuse to release his tax returns, claiming he cannot do it because he is under IRS audit while claiming in nearly the same breath during Monday's debate, “I will release my tax returns against my lawyers wishes, when she [Clinton] releases her 33,000 deleted emails.”

The Times contacted Jack Mitnick, the retired attorney and accountant whose name appeared on the document as the tax preparer. Mitnick declared the document and his signature genuine. Experts the Times called in to examine the pages found no evidence of wrongdoing by Trump even though the $916 million in losses had to be eye-popping for the IRS:

“He has a vast benefit from his destruction” in the early 1990s, said one of the experts, Joel Rosenfeld, an assistant professor at New York University’s Schack Institute of Real Estate. Mr. Rosenfeld offered this description of what he would advise a client who came to him with a tax return like Mr. Trump’s: “Do you realize you can create $916 million in income without paying a nickel in taxes?”

Mr. Trump declined to comment on the documents. Instead, the campaign released a statement that neither challenged nor confirmed the $916 million loss.

“Mr. Trump is a highly-skilled businessman who has a fiduciary responsibility to his business, his family and his employees to pay no more tax than legally required,” the statement said. “That being said, Mr. Trump has paid hundreds of millions of dollars in property taxes, sales and excise taxes, real estate taxes, city taxes, state taxes, employee taxes and federal taxes.”

The statement continued, “Mr. Trump knows the tax code far better than anyone who has ever run for President and he is the only one that knows how to fix it.”

One presumes the Trump campaign did not intend fix in the definition 7 sense.

The Times observes that the pages it obtained revealed little about Trump's charitable giving:

Because the documents sent to The Times did not include any pages from Mr. Trump’s 1995 federal tax return, it is impossible to determine how much he may have donated to charity that year. The state documents do show, though, that Mr. Trump declined the opportunity to contribute to the New Jersey Vietnam Veterans’ Memorial Fund, the New Jersey Wildlife Conservation Fund or the Children’s Trust Fund. He also declined to contribute $1 toward public financing of New Jersey’s elections for governor.

His rival for the presidency has been both more forthcoming and more charitable:

For Hillary and Bill Clinton, the total is $23.2 million between 2001 and 2015. That figure comes from the Clintons’ joint tax returns, which the Democratic nominee has released.

Trump says he is worth far more than the Clintons. He recently claimed his net worth as more than $10 billion.

But it appears he has donated far less.

The Washington Post has identified about $3.9 million in donations since 2001 from Trump’s own pocket.

At ten percent, the Clintons' charitable giving looks downright biblical. Contrary to the email from your wingnut uncle, the money the Clintons contributed did not go into their own pockets. Trump, however, seems to have used others' donations to his private foundation to pay off his debts:

The Donald J. Trump Foundation has raised very little money over the years and appears to have done little in the way of charitable giving. That’s not the scandal, however. More troubling is the way in which Trump has funded his foundation and then used its resources. Thanks to the dogged reporting of David Fahrenthold of the Washington Post, we now know that Trump has apparently directed those who owe him money to donate to the foundation. He has then used money in the foundation to make political donations, buy a portrait of himself, and, even more disturbing, to settle personal and business disputes. That behavior evinces a shocking disregard for the law—one that makes Trump’s boasts about fighting to pay as little income tax as possible even more ominous than they initially sounded.

Tax returns Clinton released for 2015 show she paid taxes at a rate of 34 percent, and more than $43 million in federal taxes since 2007. By Trump's rules, that either makes Hillary Clinton not as smart as he is or more patriotic. She isn't trying her damndest to get America's blessings for nothing.

Trump, of course, is threatening legal action against the Times for the release of the pages. It's a thing the thin-skinned mogul has done before over a joke he doesn't like.