Injustice for all by @BloggersRUs 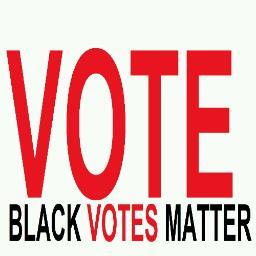 Early voter turnout in North Carolina is up overall from 2012, but not among the state's African-American voters. With the fate of the U.S. Supreme Court in the balance, they may have the most to lose. Black Lives Matter is still an aspirational slogan. This election, more than most, will determine how long it remains aspirational, and how long American justice fends off reform and voter suppression efforts remain in place.

Whether Hillary Clinton (assuming she wins the presidency next Tuesday) gets to appoint justices to the Supreme Court will depend on Democratic control of the Senate. Control will depend on turnout in this election.

Slate's Jamelle Bouie believes, and Congressional obstructionism supports, that the Republicans' default position is that "Democratic presidents are inherently illegitimate." Given that, Scott Lemieux considers how under a Hillary Clinton administration Republican obstruction might play out with SCOTUS nominees:

Many pundits assume that point-blank refusing to fill the vacant Supreme Court seat will be politically impossible for Republicans. These pundits are, however, probably wrong. Everything about the way Senate Republicans have operated under the leadership of Majority Leader Mitch McConnell suggests that keeping Scalia’s seat open is exactly what the GOP will do. The GOP’s drift from traditional norms of governance has only been exacerbated by Trump, who has stoked the anti-establishment sentiments roiling the Republican base and made it virtually impossible for Republican legislators to work with Democrats on anything.

From congressional obstruction to shutting down the government to threatening to default on America's debt to nominating Donald Trump as their nominee for president, Republicans have rejected established norms that stabilized this republic for nearly two and a half centuries. The only thing they really wish to conserve is their power. Lemieux believes they will pay no price for throwing sand in the gears of the constitution they are sworn to uphold:

On the one hand, the stakes of filling the Supreme Court seat are huge. Even a moderate like [Merrick] Garland would be the most liberal median Supreme Court vote in nearly 50 years. On the other hand, all evidence suggests that the political costs of refusing to fill Scalia’s seat would be negligible. The obstruction of Garland has gotten virtually no attention during the presidential campaign. The general public pays very little attention to the Supreme Court. Legal scholars will fret that the Court won’t be able to efficiently resolve circuit splits, but virtually nobody will change their vote because of it. Republican senators have much more to worry about from primary voters who would be furious at any senator who voted to shift the Court well to the left than from a general electorate that will almost certainly ignore Republican obstructionism yet again.

Low voter turnout from black voters proves Lemieux's point. Everything from voting rights to criminal justice reform is on the table next week, including whether or not Black Lives Matter. If they do, voters must demonstrate that affirmatively at the polls by exercising the power they have in their hands.

In Asheville, NC two weeks ago, the Rev. William Barber, head of the state NAACP, reminded a Moral Monday rally crowd that a federal court found North Carolina's laws designed to keep black voters from the polling booth "surgical racism." The state has spent $6 million defending those laws, Barber reminded the crowd. "We better vote, because nobody would spend that kind of money to stop you if you were not powerful."

Those efforts to keep black voters from exercising theirs has brough federal election monitors to the state:

The Cumberland County director of elections told the Fayetteville Observer she didn’t know why the federal observers were coming. But as TalkingPointsMemo’s Tierney Sneed noted, the answer is fairly obvious: Cumberland is at the epicenter of a voting rights crisis that has resulted in the purge of nearly 6,700 voters from the roll, most of them minorities. In Cumberland alone, about 5,600 people had their voting rights nullified over the past two years. The problem is a state law that allows any person to revoke any other person’s right to vote by gathering mail that was returned as undeliverable, then challenging the voter registration of residents at those addresses. If those voters do not appear at a county board of elections or return a notarized form, they are removed from the voter rolls, often without their knowledge.

So long as Republicans retain control of state legislatures across the country, these kinds of laws will proliferate and injustice will prevail, leaving the courts the last line of defense for justice in this country, and a weakened one at that. But even justice after the fact will not bring back slain family members who were victims of police violence and a biased justice system. Hillary Clinton has called for criminal justice reform and for "national guidelines about the use of force, particularly lethal force." Donald Trump has called for getting "tough."

If Black Lives Matter, then as Barber urged, "We better vote."