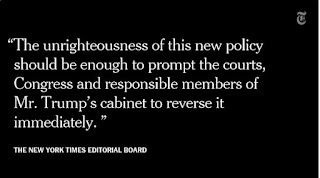 Washington Post headline: Judge halts deportations as refugee ban causes worldwide furor
A second Sad! Saturday™ for President Donald J. Trump. Where to begin? Well, first by resisting the urge for a play on the word furor, but of course worldwide just sells it. You know the Post's headline writer laughed out loud typing that. The Post reports:

A federal judge in New York blocked deportations nationwide late Saturday of those detained on entry to the United States after an executive order from President Trump targeted citizens from seven predominantly Muslim countries.
Judge Ann Donnelly of the U.S. District Court in Brooklyn granted a request from the American Civil Liberties Union to stop the deportations after determining that the risk of injury to those detained by being returned to their home countries necessitated the decision.

The fact that a woman issued the emergency stay made me laugh out loud. Donnelly was joined soon after by another court in Alexandria Virginia, and a ruling by U.S. District Judge Leonie Brinkema. Double ouch. Donnelly was appointed by President Barack Obama. Brinkema, by President Bill Clinton, according to one report.
David Atkins reminded Twitter: "As judicial blocks on Trump reach SCOTUS, remember that 4-4 rulings affirm lower courts. Trump's SCOTUS pick must be delayed at all costs."

The ACLU was defiant:

“I hope Trump enjoys losing. He’s going to lose so much we’re going to get sick and tired of his losing,” ACLU National Political Director Faiz Shakir told Yahoo News shortly after the decision was announced.

The backlash to Trump's action was instant once reports of detentions circulated. Protesters jammed airports across the country. CNN reports that the policy did not receive the standard interagency vetting experienced White House teams use:

Friday night, DHS arrived at the legal interpretation that the executive order restrictions applying to seven countries -- Iran, Iraq, Libya, Somalia, Syria, Sudan and Yemen -- did not apply to people who with lawful permanent residence, generally referred to as green card holders.
The White House overruled that guidance overnight, according to officials familiar with the rollout. That order came from the President's inner circle, led by Stephen Miller and Steve Bannon. Their decision held that, on a case by case basis, DHS could allow green card holders to enter the US.

Guidance sent to airlines on Friday, however, stated "lawful permanent residents are not included and may continue to travel to the USA."

Before the President issued the order, the White House did not seek the legal guidance of the Office of Legal Counsel, the Justice Department office that interprets the law for the executive branch. A source said the executive order did not follow the standard agency review process that's typically overseen by the National Security Council, though the source couldn't specifically say if that included the decision to not have the order go through the Office of Legal Counsel.

Despite Trump's claims Saturday that the plan was "working out very nicely," there were reports of chaos on the ground:

Hearing that customs officials in tears because they can't get guidance from White House, DHS not returning calls, etc and crowds growing.

And reports of cheers in the air:

Digby pointed yesterday to stories about some of the people the Department of Homeland Security began detaining at airports yesterday. Hameed Khalid Darweesh and Haider, a former US interpreter during the Iraq War, and Sameer Abdulkaleq Alshawi were released at JFK Airport late Saturday, but it was unclear how many others remained in custody at airports around the country. It was "chaos, confusion and fear," according to ABC News. Fuad Sharif and his family got pulled off a plane in Cairo and will have to return to Iraq. He received a visa because he risked his life for the U.S. government. "I am ruined now. I don't know what to do, because I sold my house. I quit my job. My wife had job and kids left school. And I paid $5,000 for the tickets. I don't know what to do, and tomorrow I am going back to Iraq. Really, really, really, I am in terrible situation."

Twitter exploded along with airport protests across the country. At New York's JFK Airport, protesters chanted into the night, "Let them in! Let them in!" and "When Muslims are under attack, what do we do? STAND UP FIGHT BACK!!"

Protesters cover the parking decks at JFK as drums beat and protesters chant: "I-L-L-E-G-A-L, this shit is illegal!!" pic.twitter.com/2ayKm7fjPI

Thousands of protesters at JFK, chanting "Let them in!" and "No hate no fear refugees are welcome here!" #MuslimBan pic.twitter.com/9SDiunzJDq

The arrivals gate at O'Hare's intl terminal is packed pic.twitter.com/7aBUMXEVHR

There's a sit down now at international arrivals SFO. People not moving until attorneys allowed in. pic.twitter.com/b3jiNfhN6T

This is what actual solidarity actually looks like in the real world: https://t.co/nhojvrd1N3 #MuslimBan

The order’s language makes clear that the xenophobia and Islamophobia that permeated Mr. Trump’s campaign are to stain his presidency as well. Un-American as they are, they are now American policy. “The United States must ensure that those admitted to this country do not bear hostile attitudes toward it and its founding principles,” the order says, conveying the spurious notion that all Muslims should be considered a threat. (It further claims to spare America from people who would commit acts of violence against women and those who persecute people on the basis of race, gender or sexual orientation. A president who bragged about sexually assaulting women and a vice president who has supported policies that discriminate against gay people might well fear that standard themselves.)

The unrighteousness of this new policy should be enough to prompt the courts, Congress and responsible members of Mr. Trump’s cabinet to reverse it immediately. But there is an even more compelling reason: It is extremely dangerous. Extremist groups will trumpet this order to spread the notion, today more credible than ever, that the United States is at war with Islam rather than targeting terrorists. They want nothing more than a fearful, recklessly belligerent America; so, if anything, this ban will heighten their efforts to strike at Americans, to provoke yet further overreaction from a volatile and inexperienced president.

To Republicans who remain quiet, or tacitly support Trump's immigration ban: history will remember you as cowards. https://t.co/xzWXRcctWZ pic.twitter.com/defVncsHzJ

But Dutch far-right politician Geert Wilders who was convicted in December for inciting hate against Muslims thinks Trump's action is all good. His invitation to the White House is likely on its way.

The International Olympic Committee votes in September whether to award sport’s biggest event to LA, Paris or Budapest, and one of the officials who will decide their fate condemned on Saturday what was among Trump’s first acts since taking office.

In case you are near a large airport, there are protests planned today across the country. Protesters in Denver reportedly thanked police for keeping them safe before leaving. Iraq War combat veteran Raf Noboa y Rivera replied, "This is key. Getting the security services to identify with us & be friendly with us will help forestall repression & make much harder."

I'm guessing he never figured he'd have to write those words about the country for which he risked his life.