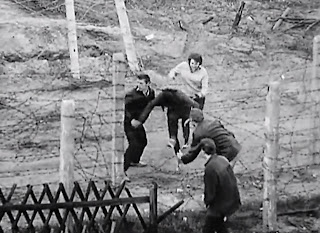 Refugees making their way across the East German border in 1962.

You know that world "apology tour" conservatives accused Obama of making that he never made? Donald Trump owes the world and real "real America" one and right now. Reuters:

Nine asylum-seekers, including four children, barely made it across the Canadian border on Friday as a U.S. border patrol officer tried to stop them and a Reuters photographer captured the scene.

As a U.S. Customs and Border Patrol officer seized their passports and questioned a man in the front passenger seat of a taxi that had pulled up to the border in Champlain, New York, four adults and four young children fled the cab and ran to Royal Canadian Mounted Police on the other side.

One by one they scrambled across the snowy gully separating the two countries. RCMP officers watching from the other side helped them up, lifting the younger children and asking a woman, who leaned on her fellow passenger as she walked, if she needed medical care.

Atlantic has the backstory to the photos by Reuters photographer Christinne Muschi:

Muschi reports that “in Quebec, 1,280 refugee claimants irregularly entered between April 2016 and January 2017, triple the previous year's total.” and that “the Canada Border Services Agency said in January that 452 people made a refugee claim at Quebec land border crossings.” Canadian advocacy groups say they are preparing for even more asylum-seekers, following increased anti-Muslim rhetoric in the U.S., and public expressions of welcome made by Canadian Prime Minister Justin Trudeau.

There are several more photos at the link.

This particular crossing place is a regular route now for refugees fleeing the United States of America to seek asylum in Canada. The country road on the American side dead ends at the Canadian border where the two countries are separated only by a low ditch and an orange marker. Kathleen Masterson of Vermont Public Radio went there to see for herself:

It's so well-known that, according to people who live on the road, the Canadian police stay parked on their side of the border most days. In New York state, taxi drivers follow a protocol where they contact U.S. Border Patrol if someone requests drop-off there — the person is still granted their ride, but U.S. officials often stop the cab to check the person's paperwork.

Wednesday, an officer in a U.S. Border Patrol car parked at the end of Roxham Road said that by 11 a.m. already two families had walked across illegally. They knowingly walked into arrest by the Canadian police waiting on the other side.

Refugee advocates say the reason so many are crossing illegally is because of the Safe Third Country Agreement signed by the U.S. and Canada in 2002. The pact is meant to prevent "shopping for asylum" in both countries; it requires refugees seeking asylum to do so in the country they reach first.

Since the United States is not looking very welcoming about now, refugees already here are looking for another way to find asylum. The Voice of America website explains that per the the agreement they would be turned back at the U.S. border, "However, if they sneak across at an unofficial location, they may apply for asylum in Canada even if they are caught. They may spend a night or two in custody, but upon release, they are free to pursue their claims."

So they're exploiting a loophole. Except for their complexion problem, you'd think Trump would welcome them as his kind of people.

ZH: I spoke with Gino Ramirez, an Army veteran who’s lived on Roxham Road for only about four or five months. He was suspicious of these migrants crossing the border right near his trailer. He said if they’re leaving the U.S., they probably did something wrong.

“If they’re running away from the problem then they have something to hide,” Ramirez said. “That’s just the bottom line. If they don’t want to be here, just go.”

ZH: But not everyone sees it that way.

Melissa Beshaw said she’s lived there for two decades. And she’s watched some people cross into Canada over the years, but she’s seen a lot more make the trip since Donald Trump was elected. And she feels sorry for them.

“Now that Trump wants all the immigrants to be sent back or whatever, it’s not right. They’re running for their lives, for their freedom. And it’s an awful thing. Even families come up here with their kids. And I feel so bad for them, you know?” Beshaw said.

While most border crossings sound less dramatic than the Reuters story at the top implies, the images of refugee families fleeing the United States of America leave me deeply saddened. In fact, they remind me of the one from Berlin at the top of the post.* "Strength" is not what comes to mind, or Lee Greenwood's sappy song. Trump's promised "big, fat, beautiful wall" to keep immigrants out could as easily serve a different function altogether. Officially, East Germany's "Anti-Fascist Protective Wall" in Berlin was there to keep out the wrong kinds of people. No amount of propaganda or "alternative facts" could conceal the ugly truth. 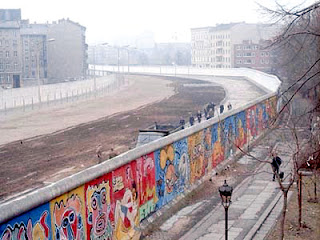 A big, beautiful wall. View from West Berlin in 1986.
Photo by by Thierry Noir via Wikipedia Commons.

* There are many more such photos out there, but they all seem owned by Getty. Here is a selection of them.