That was the surreal week that was

That was the surreal week that was 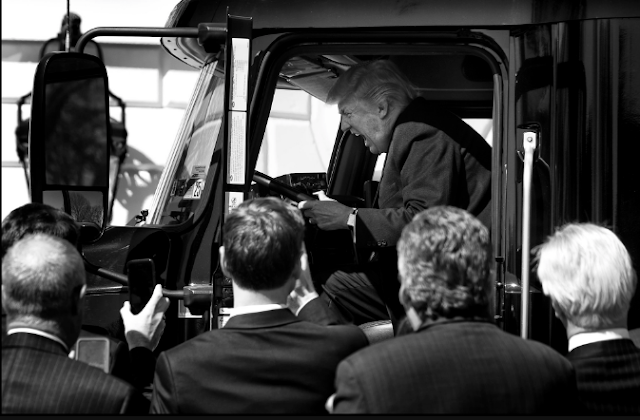 On Thursday I wrote a snarky lead for my story about the Devin Nunes mini-drama commenting on how “prescient” Donald Trump and his associates have been — implying that they are often scheming and just can’t keep their mouths shut about what they are up to. It turns out that I’m the one who’s prescient. Later that morning Time magazine’s Michael Scherer released an interview with President Trump about his relationship with facts and the truth, in which he essentially said that he’s an “instinctual” person who says things that may not be factual in the moment but that will come true in the future.


As I write this, we are waiting to see if Speaker Paul Ryan and President Trump will be able to corral enough Republican votes to repeal Obamacare and replace it with the legislative mutant they call the American Health Care Act. It’s unknown at this hour exactly what’s in it but reports have it growing more cruel and heartless by the minute. This was largely because Trump himself got into the negotiations with the hard-right Freedom Caucus and promised its members the moon. Here’s how it looked:

You’ll notice that the group was unmistakably estrogen free (as well as blindingly white). That was particularly offensive since those legislators had spent the day insisting that men shouldn’t have to pay for women’s health care (a problem that analyst Ron Brownstein has dubbed “the mommy tax“).If the Freedom Caucus dream bill were to pass into law, it would essentially create a lucrative government subsidy for insurance companies that no longer have any obligation to provide actual insurance. As Chris Hayes said on his show on Thursday night, it’s an invitation for thousands of Trump University-style scams to spring up all over the country to take advantage of free money in an unregulated market.Trump made lots of promises but didn’t really get anywhere as one vote gained became two votes lost. If he knew anything about what really makes Republicans tick he would have taken a page from his vice president’s playbook and simply reminded them of their reason for living:


Met with the Tuesday Group this afternoon to #passthebill so we can repeal hundreds of billions of dollars in Obamacare's taxes. #AHCA pic.twitter.com/COG45Y2dMK
— Vice President Pence (@VP) March 23, 2017


By the end of the day Trump put his foot down and threatened the caucus with a vow to keep Obamacare in place if they don’t pass the bill on Friday. They all undoubtedly know that keeping Obamacare has been Trump’s real preference for some time now. If his vaunted “instincts” are truly as keen as he thinks they are, this would likely be the outcome. He can say it’s what he always wanted, rail against former President Barack Obama for a few more years and blame Paul Ryan for the political fallout.Of course, if they do manage to pass the bill, Trump will take credit for being the greatest negotiator the world has ever seen. He will win no matter what because in his mind everything in the world is about who gets blamed — and as I wrote a while back, it’s never going to be him. He told Scherer in the Time interview:


What am I going to tell you? I tend to be right. I’m an instinctual person, I happen to be a person that knows how life works.

One would think that a momentous legislative event like this would be the only real political news out there, but the near-death of the AHCA was just one of several stories in this wild week. Early on came the shocking House Intelligence Committee hearing with FBI Director James Comey and National Security Agency chief Michael Rogers in which it was confirmed that there were investigations of possible coordination between Trump’s campaign and agents of the Russian government to tilt the election in favor of Trump. Both also testified in no uncertain terms that the wiretapping accusations by the president against former President Obama were untrue.

Two days later this serious event turned darkly comical when Nunes, chair of the House Intelligence Committee, called a press conference to reveal that a “source” had shown him evidence that Trump’s transition staff had been under surveillance after all and he needed to rush over to the White House to inform the president. Nunes has refused to share the evidence with anyone else, but from what people have gathered it’s likely that some routine intercepts captured conversations or emails involving members of the Trump team.

The Time interview was being held as the Nunes story was breaking and Scherer hadn’t even heard about it. Trump immediately informed him that Nunes had a lot of information about the surveillance and went on and on with an unintelligible rationale for the nasty accusation. But buried in the middle of that word salad was this:

Nunes made a valiant first pass at making his president’s prediction come true but he didn’t get the job done.
Trump went on to list other predictions that came true, most of which were figments of his imagination. He truly believes that he’s never ever been wrong about anything and when he lies he’s actually telling the future. He said it over and over again in that astonishing interview. When asked if he will have a credibility problem when he has to deal with a serious national security event, he replied:

He signed off the interview simply saying, “Hey look, in the meantime, I guess, I can’t be doing so badly, because I’m president, and you’re not.”

Believe it or not, that’s still not the most surreal thing that happened this week. In the middle of the hard-fought health care negotiations on Thursday, Trump held yet another one of his tedious photo-ops. And this happened:

Other than totally abdicating every promise he made to his voters on health care and being implicated in potentially the biggest scandal in American history, it was a good week for the president. He got to sit in a big truck.