The company store by @BloggersRUs

When Norma Rae first hit theaters in 1979, I watched it in a packed movie house in West Hollywood with a friend from Greenville South Carolina. The textile mill Norma Rae worked in looked like one of the dying mills on the west (poor) side of Greenville. Partway through the tale of troubled union organizing in the South, I leaned over and whispered we were probably the only people in the theater to realize the film was not a period piece.

Looking ahead at what the economy has in store for a lot of Americans, that "period" is coming back.

Jia Tolentino writes in the New Yorker about the "gig economy" that celebrates working yourself to death. She begins with a cheery marketing tale of a Lyft driver going into labor who stops to take another fare on her way to the hospital. That's the spirit!

It does require a fairly dystopian strain of doublethink for a company to celebrate how hard and how constantly its employees must work to make a living, given that these companies are themselves setting the terms. And yet this type of faux-inspirational tale has been appearing more lately, both in corporate advertising and in the news. Fiverr, an online freelance marketplace that promotes itself as being for “the lean entrepreneur”—as its name suggests, services advertised on Fiverr can be purchased for as low as five dollars—recently attracted ire for an ad campaign called “In Doers We Trust.” One ad, prominently displayed on some New York City subway cars, features a woman staring at the camera with a look of blank determination. “You eat a coffee for lunch,” the ad proclaims. “You follow through on your follow through. Sleep deprivation is your drug of choice. You might be a doer.”

A Fiverr press release on the campaign states,

“The campaign positions Fiverr to seize today’s emerging zeitgeist of entrepreneurial flexibility, rapid experimentation, and doing more with less. It pushes against bureaucratic overthinking, analysis-paralysis, and excessive whiteboarding.” This is the jargon through which the essentially cannibalistic nature of the gig economy is dressed up as an aesthetic.

No, really. You're not being exploited. You're experiencing greater freedom as an independent contractor living lean and on the edge as part of the emerging zeitgeist. You're "connecting, having fun, and killing it!" Lyricism like that got Arthur Dent thrown out of a Vogon airlock. On the 106th anniversary of the Triangle Shirtwaist fire, Matthew Dessem examines how the company's proprietors might have used such marketing upspeak to rebrand their sweatshop as a "hip, open-plan workplace" where partners won't have to "wander the confusing maze of government bureaucracies looking for an exit."

Perhaps Donald Trump's new Housing and Urban Development secretary, Ben Carson, wrote that copy for Fiverr to make extra cash in his spare time. After all, in his first address, Carson presented his staff with an inspiring tale of immigrants who came to these shores for the opportunity to be a part of America's exciting experiment in "can-do" capitalism: "That's what America is about. A land of dreams and opportunity. There were other immigrants who came here in the bottom of slave ships, worked even longer, even harder for less." They weren't slaves. They weren't human chattel. They were doers.

The Midas cult peddles this kind of delusional twaddle with a straight face. Believers celebrate (other) people working longer hours and into early graves as "uniquely American." Normal. A recovering Oxycontin addict tells PBS News Hour [timestamp 6:12], "it's the only thing that makes you feel normal. And it's the farthest thing from normal." But you can't see that from the inside of either an addiction or an economic cult.

Truth may be dead, but it occasionally intrudes nonetheless on cult catechism. A study by Anne Case and Nobel Prize-winning economist Angus Deaton of Princeton University finds that in America the problem is not just people working themselves to death, but people not working themselves to death. The reprobation the Midas cult heaps on the long-term unemployed is such that excommunicates are treating their guilt and hopelessness with opioids or a bullet to the head. The Princeton researchers call them "deaths of despair."

Angus Deaton: Mortality rates have been going down forever. There's been a huge increase in life expectancy and reduction in mortality over 100 years or more, and then for all of this to suddenly go into reverse [for whites ages 45 to 54], we thought it must be wrong. We spent weeks checking out numbers because we just couldn't believe that this could have happened, or that if it had, someone else must have already noticed. It seems like we were right and that no one else had picked it up.

We knew the proximate causes — we know what they were dying from. We knew suicides were going up rapidly, and that overdoses mostly from prescription drugs were going up, and that alcoholic liver disease was going up. The deeper questions were why those were happening — there's obviously some underlying malaise, reasons for which we [didn't] know. 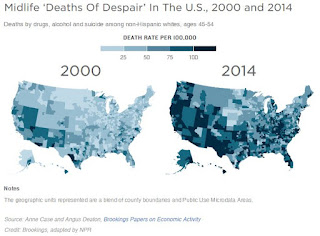 Anne Case: These deaths of despair have been accompanied by reduced labor force participation, reduced marriage rates, increases in reports of poor health and poor mental health. So we are beginning to thread a story in that it's possible that [the trend is] consistent with the labor market collapsing for people with less than a college degree. In turn, those people are being less able to form stable marriages, and in turn that has effects on the kind of economic and social supports that people need in order to thrive.

In general, the longer you're in the labor force, the more you earn — in part because you understand your job better and you're more efficient at your job, you've had on-the-job training, you belong to a union, and so your wages go up with age. That's happened less and less the later and later you've been born and the later you enter this labor market. 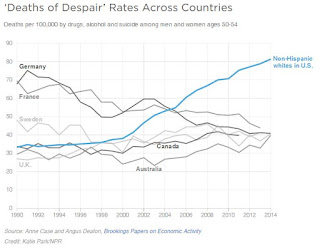 Deaton: We're thinking of this in terms of something that's been going on for a long time, something that's emerged as the iceberg has risen out of the water. We think of this as part of the decline of the white working class. If you go back to the early '70s when you had the so-called blue-collar aristocrats, those jobs have slowly crumbled away and many more men are finding themselves in a much more hostile labor market with lower wages, lower quality and less permanent jobs. That's made it harder for them to get married. They don't get to know their own kids. There's a lot of social dysfunction building up over time. There's a sense that these people have lost this sense of status and belonging. And these are classic preconditions for suicide.

The Los Angeles Times account reports on several factors behind the spike, including "the widespread erosion of institutions that provided stability in American life for much of the 20th century: the manufacturing industry, the church, unions and stable marriage." The second item in that list is none of the government's business. But we might strengthen the first and the third through public policy, and thereby reinforce the last. Problem is, the Midas cult's systematic policy for decades has been to encourage offshoring of manufacturing and to discourage formation of unions in pursuit of wealth maximization for the priest class. Meanwhile, it's just fine with the company if those working longer hours for less and those who aren't working at all owe their souls to the company store. As I said, that period is making a comeback.

Case and Deaton believe the damage done is the result of "cumulative disadvantage over life" that will take years to reverse. But so far, there are only promises of better times from policymakers whose focus is on reelection and the the economy rather than on the people in or victimized by it.

.. his testimony suggests that as labor secretary his primary goal would not be to look out for workers by promoting fair pay and workplace safety. Instead, he seems more interested in shielding employers from having to address those concerns.

Mr. Acosta’s answers to questions about other worker protections were also troubling. He would not commit to upholding a Labor Department rule, set to take effect in April, that would require financial advisers to put clients’ interests first when giving advice or selling investments for 401(k) rollovers or other retirement-related transactions. Nor would he commit to enforcing a rule to protect construction workers from carcinogenic dust.

But they'll defend a worker's right to work for less, and to grow another day older and deeper in debt.

With this week's collapse of the Republican effort to repeal and replace Obamacare, Democrats have an opportunity to step into the power vacuum and offer Americans something better. Bernie Sanders announced he would:

“We have got to have the guts to take on the insurance companies and the drug companies and move forward toward a Medicare-for-all, single-payer program,” Sen. Bernie Sanders (I-Vt.) said on MSNBC’s “All In with Chris Hayes” on Friday night. “And I’ll be introducing legislation shortly to do that.”

That's laudable, timely and symbolic, but not enough. Sanders is still an outlier. Both Republicans and Democrats are still too closely allied with the financialized economy and in the thrall of the cult. If not of Midas, then Rand. People need work, decent-paying work, not just for keeping a roof over their heads, but to maintain their dignity and mental health.

Sitting in that theater watching Norma Rae, I wondered how many sitting around me might think it a reflection of a time gone by. Now I worry it was predictive of a time coming back.