Welcome to the party, pal! by @BloggersRUs

Welcome to the party, pal! 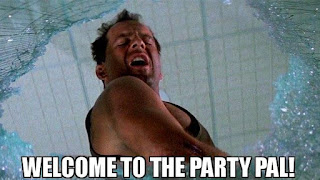 Attacking cities is the current offensive from the people who brought you the Defund the Left strategy. They've gone after private-sector unions. They've gone after redistricting and trial lawyers. Defunding 2.0, as Kevin Drum observed in 2011, involved passing voter ID laws, defunding ACORN, and decimating public-sector unions. Now it's cities being targeted because that's where the largest blocks of blue votes are.

GOP-led legislatures are implementing changes to governance and revenue streams, strategically starving cities of revenue, leaving city leaders with no choice but to raise taxes and/or cut services and piss off voters. It's happening in North Carolina and elsewhere:

After a couple of cycles, Republicans will be running candidates who blame North Carolina cities’ financial woes on “mismanagement and waste” by Democrats, and counting on voters to forget by then who precipitated the crisis in the first place. They’ll succeed if we don’t remind voters at every opportunity that it’s their strategy. It is deliberate.

As "preemption" spreads and becomes all the more encompassing -- or in other words, as more states remove specific or broad powers from local governments -- it is beginning to smother basic elements of local democracy. "Home Rule," which exists to safeguard an assumption of power for local governments, is being silently reversed.

Home Rule powers for municipalities were won decades -- and in some states, a century -- ago through state constitutional amendments spearheaded by the "Progressive Era." With Home Rule, localities enjoy a presumption of power, which means that if the state is silent on an issue, municipalities can fill the void. Without Home Rule, all their powers have to be explicitly granted to them by the state, as was the case in Florida, before voters approved a Home Rule amendment in 1968. Municipalities were wards of the state. Home Rule tried to reverse that.

However, nothing in the Home Rule amendments placed a check on the state's authority to unilaterally restrict and weaken Home Rule powers. For example, HB 17 and SB 1158, if passed, would rein in powers the 1968 Florida amendment won for municipalities. As the Florida League of Cities warns, "The bills would return Florida to a time when redress of local problems depended on a statewide body [the legislature] that took official action only once a year and from hundreds of miles away."

North Carolinians still wrestling with repealing HB2 and fighting off state efforts to appropriate city-owned, revenue-generating public assets such as airports and water systems can only say, "Welcome to the party, pal."

Sharecroppers, if you prefer. Home Rule and Dillon's Rule are not mutually exclusive and many states use hybrid systems.

The strategic use of maximum preemption laws dates back to the 1980s, when localities began passing smoking bans and smoke-free requirements. As court documents later revealed, R.J. Reynolds began promoting preemption because, in its own words, “state laws which preempt local anti-tobacco ordinances are the most effective means to counter local challenges.” Although further grim research findings eventually dealt the tobacco industry’s campaign mortal blows, other groups learned from its efforts. The National Rifle Association used similar tactics in the 1990s when concerns about crime prompted local gun regulations; 43 states now have some form of maximum preemption preventing localities from passing additional gun regulations on top of state law.

In the last five years, as Republicans have captured an unprecedented number of state legislatures and as cities have become hotbeds for progressive organizing, the number of maximum preemption laws has grown dramatically. In 2011, after Wisconsin passed a bill limiting the local ability to require paid sick days, ALEC and the National Restaurant Association took up the cause, and now 15 states have preempted local paid sick day requirements. According to Grassroots Change, in 2015 at least 29 states introduced a maximum preemption measure and, of them, 17 considered more than one. The progressive source PR Watch reports that Florida alone considered 20 such measures. The bills’ concerns range from forbidding local plastic-bag bans to preventing towns from increasing the minimum wage. Last year saw a rise in what progressives call “super-preemption” bills, which both limit local authority and offer the right to sue non-compliant cities or counties to both individuals and corporations.

There are rumblings from Raleigh of more such bills ready to drop. But as Simon Davis-Cohen writes at TruthOut, cities are struggling for an effective response. In Florida, #DefendLocal has united SEIU Florida, Equality Florida, Florida Immigrant Coalition, Florida Alliance for Consumer Protection, Florida National Organization for Women, and the League of Women Voters of Tallahassee, among others. Their goal is "to send a message to our state lawmakers that local communities want local solutions to local problems, not more heavy-handed state government." Davis-Cohen concludes:

Not a moment too soon.