On the filibuster (or bipartisanship is dead and that's ok) 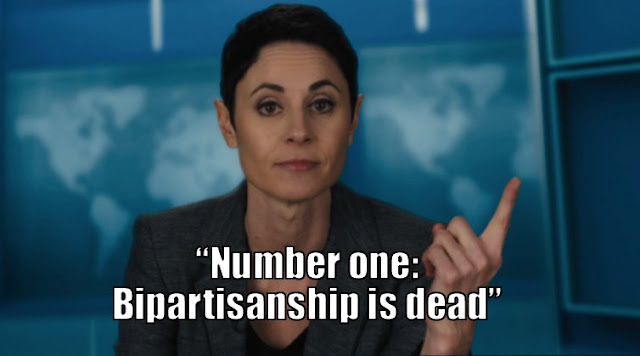 There is no bipartisanship anymore. Let's stop pretending. For the time being, we are living in a political world in which institutional power, elections and public opinion are how agendas are enacted or rejected. Horse trading and compromise no longer work. It's been this way for a while but the Democrats clung to the old ways longer than the Republicans because of their structural weakness in the Senate which grants greater power to conservatives in small states than they deserve in a democracy.

That's over now. The treatment of Garland and the elimination of the filibuster for Supreme Court Justices is just an acknowledgement of this existing fact.

Is it better than the old ways? I don't know. We're about to find out.
But if this allegedly dire warning from the New York Times is any indication, it's hard to see why we should fear it:

"Without the current filibuster rule on legislation, Democrats, should they dominate Washington again one day, could seek a large increase in the minimum wage, increased Social Security benefits, paid family leave or Medicare for all. And they would need only a simple majority to do it."

The Republicans have the same ability, of course. And they aren't afraid to use it.  Their problem isn't a lack of bi-partisanship. Their problem is that their own party is at war with itself and it has been for quite some time.

This could easily happen to the Democrats as well, of course. But so far, the Democrats have kept their internecine battles within reason and usually figure out a way to function. (Who knows how long that will last? )

Today the process is to win elections, enact your agenda on a party line and if the public likes it, they'll re-elect. If they don't, the other side will get their chance. In each case, the party hopes it can leverage it's partisan power to its advantage while the opposition uses organized activism and public opinion to try to obstruct it.

Maybe things will go back the way they were with the parties each having several factions that can work across party lines. But that is not today --- or tomorrow.