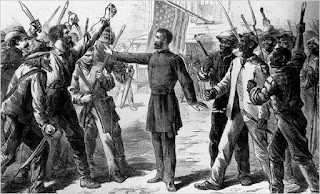 A Freedman Bureau agent stands between armed groups of whites and Freedmen in this 1868 sketch from Harper's Weekly.

You've got to admire their tenacity. Here in North Carolina, Democrats have been fighting a radicalized Republican Party for some years now. At least since they gained control of the legislature in the 2010 sweep election. Since that time, they have worked assiduously at consolidating their power at every turn using every method at their disposal.

The 2013 omnibus election law intended to suppress black turnout in the state "with almost surgical precision" lost in the Supreme Court this month. Their 2011 gerrymandering of state congressional districts designed to limit the influence of black voters lost in the Supreme Court a week later. Gerrymandering cases involving state legislative districts are working their way through the courts.

The New York Times observes that in spite of repeated losses, the Republicans are unbowed:

But if North Carolina Republicans have been chastened in Washington, there is scant evidence of it here in the state capital. Quite the opposite: Hours after the court nullified the elections law, for example, party officials said they would simply write another.

They keep pressing on. To say "with a vengeance" is no exaggeration.

“What we’re seeing in North Carolina is an effort at political entrenchment that is unparalleled,” said Allison Riggs, a senior staff lawyer at the Southern Coalition for Social Justice, a Durham advocacy group that sued Republican leaders over the election law. “It requires a complete disregard for the will of the voters and political participation, and a disregard for the independence of the judiciary.”

That last statement refers to Republican efforts to prevent the new Democratic governor from filling vacancies on the state's Court of Appeals. (Merrick Garland knows all about how that works.) Republicans have also passed measures to make it more difficult for cases to rise to the state Supreme Court where Democrats now hold a slim majority. First-on-the-ballot placement in a nonpartisan Supreme Court race allowed a black Democrat to win a Supreme Court seat in November in the year of Trump. So that arrangement had to change.

In March, a state commission charged with improving the state’s courts urged the legislature to scrap the requirement that judges win election to the bench, saying it forced candidates to seek contributions from people who appeared before them.

Eight days later, the legislature voted to change lower-court elections from nonpartisan to partisan affairs, requiring nearly 400 judges to run under party labels in a bid to put more Republican loyalists on the bench. (The legislators had earlier made appeals and Supreme Court elections partisan.) Two Republican legislators filed a bill to split Charlotte’s Democratic-leaning Mecklenburg County judicial district into three new ones that would give Republicans a better shot at victory.

The assaults are not limited to elections or to the courts. Cities themselves are under attack. Public schools and universities are under assault. Public lands and infrastructure are being privatized. It is, as I've said before, the next phase of the conservative effort to defund the left.

If the courts push back, try, try again. If the courts don't, they've drawn a new line to be stepped over at the next opportunity. It is important for progressives to understand that winning a single victory, winning the presidency or a single court case (or a series) will not stop them. Like the Borg, they adapt and keep coming. Tenacity is a trait progressives will need for these fights.

The Times notes that much of this is "full-bore payback for Democratic abuses in the past."* But since Republicans have not seen this level of control in a hundred years, they are settling scores few Republican legislators serving today were alive to see, and visiting the iniquity of the fathers on the children to the third and the fourth generation.

Like the bloody shirt, this is a theme. And like the Confederate war memorials just removed in New Orleans, these measures are being erected purposefully to send a strong message about who is in charge.

* Prior to losing the majority, friends had urged the Democratic Senate Majority Leader to move to partisan redistricting. They were rebuffed, the story goes. "Democrats draw great districts," he said.