Conservatives without conscience again by @BloggersRUs 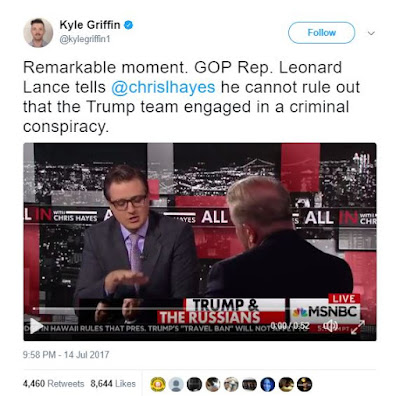 After decades of accusations from conservatives that the American left advances reprehensible moral relativism, this week we saw that the real sin was having morals of any kind. What the Trump family modeled for the world this week is what it looks like to have none. Watergate veteran John Dean warned during the Bush II administration of the rise of "Conservatives Without Conscience." The Trumps consider that lack a plus.

"What stood out most in the interview was the moral emptiness of the president’s son," Slate's William Saletan wrote after Donald Trump Jr. appeared with Sean Hannity to explain away his meeting last June with a Russian emissary offering dirt on Hillary Clinton. What looks to be a willingness to conspire with a hostile foreign power to undermine an American election, Trump Jr. dismissed as no big deal. “That’s what we do in business. If there’s information out there, you want it." He might have done things differently, but he'd done nothing wrong.

President Trump remarked, “I think from a practical standpoint, most people would have taken that meeting.” Most people named Trump.

Washington Post conservative columnist Jennifer Rubin disagrees. She builds on an earlier column from David Brooks accusing the Trumps of being naked capitalists with “no attachment to any external moral truth or ethical code.” Rubin sees a much deeper rot underneath the Republican standard-bearer, a party animated by decades of demonization of the Other, by a distorted sense of reality — indeed, the party has constructed an alternative one more to its liking — and by a pervasive and conditioned sense of victimhood. Mixed with Clinton derangement. "Only in the crazed bubble of right-wing hysteria," she writes, "does an ethically challenged, moderate Democrat become a threat to Western civilization and Trump the salvation of America." Rubin continues:

We have always had in our political culture narcissists, ideologues and flimflammers, but it took the 21st-century GOP to put one in the White House. It took elected leaders such as House Speaker Paul D. Ryan (R-Wis.) and the Republican National Committee (not to mention its donors and activists) to wave off Trump’s racists attacks on a federal judge, blatant lies about everything from 9/11 to his own involvement in birtherism, replete evidence of disloyalty to America (i.e. Trump’s “Russia first” policies), misogyny, Islamophobia, ongoing potential violations of the Constitution’s emoluments clause (along with a mass of conflicts of interests), firing of an FBI director, and now, evidence that the campaign was willing to enlist a foreign power to defeat Clinton in the presidential election.

Out of its collective sense of victimhood came the GOP’s disdain for not just intellectuals but also intellectualism, science, Economics 101, history and constitutional fidelity. If the Trump children became slaves to money and to their father’s unbridled ego, then the GOP became slaves to its own demons and false narratives. A party that has to deny climate change and insist illegal immigrants are creating a crime wave — because that is what “conservatives” must believe, since liberals do not — is a party that will deny Trump’s complicity in gross misconduct. It’s a party as unfit to govern as Trump is unfit to occupy the White House. It’s not by accident that Trump chose to inhabit the party that has defined itself in opposition to reality and to any “external moral truth or ethical code.”

I'll note that the Republican party continues to press forward in a near-Ahabish pursuit of abolishing Obamacare and immiserating millions of Americans so it can pass tax cuts for its wealthy patrons. Two (and maybe a few more) of its senators may yet have "what passes for a crisis of conscience" in balking at passing "savage cuts" to Medicaid in the repeal bill, according to Ford Vox, a physician specializing in rehabilitation medicine and a journalist writing for CNN. He observes the same empathy-challenged nature Dean reported from Robert Altemeyer's research on authoritarians:

What neither side [of the GOP split] acknowledges, nor even seems aware of, is another moral divide that exists in the shadow of the Medicaid battle. It is created by politicians who cannot resist offering extraordinary, extremely expensive and rickety lifelines to individuals whose suffering makes the TV news. At the same time, they are entertaining dramatic and life-wrecking cuts to the basic humanitarian care we provides to millions of poor Americans -- children, disabled and elderly.

They'll spare no expense when there's a name and a face behind a need, but if they don't know for sure which of their fellow citizens might benefit, pennies get pinched, and dollars slashed.

And that's why you will be going back to your phones and faxes again this weekend.