A question of conscience by @BloggersRUs

A question of conscience 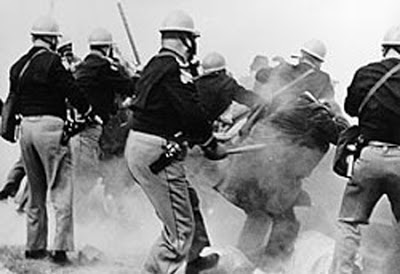 I am trying to weigh the merits of the “antifa” (antifascist or Anti-Fascist Action) groups confronting the alt-right assemblage of Nazis, Klansmen, white nationalists, etc. at the recent white power and Unite-the-Right protests. The violent clashes between antifa counterprotesters and the alt-right in Charlottesville last weekend, and the death of Heather Heyer, have put a spotlight on the antifas the groups have not received in the past. Like their opponents, the antifas are not a monolithic group, and loosely organized into local cells, sometimes overlapping with masked, black bloc anarchists. While clergy and Black Lives Matter groups prefer nonviolent protest, the antifas prefer more direct confrontation.

Peter Beinert writes at The Atlantic:

Those responses sometimes spill blood. Since antifa is heavily composed of anarchists, its activists place little faith in the state, which they consider complicit in fascism and racism. They prefer direct action: They pressure venues to deny white supremacists space to meet. They pressure employers to fire them and landlords to evict them. And when people they deem racists and fascists manage to assemble, antifa’s partisans try to break up their gatherings, including by force.

The local Indivisible chapter organized a peace vigil downtown here last Sunday in solidarity with Charlottesville. It was one of many such vigils around the country. Not a Nazi symbol in sight. Yet the local antifa group that attended seemed bent on taking over what was intended to be a peaceful rally. There was a shouting match with police the organizers had requested. Later, the group split off and marched through downtown chanting slogans. To the usual "Whose streets? Our streets!" they added “Cops and the Klan go hand in hand.” and "What do we want? DEAD NAZIS. When do we want 'em? NOW!"

One protester was later arrested for assaulting a TV reporter, although no injury was reported. The accounts of witnesses I spoke to suggest it was a local antifa member.

”The antifa protesters disrupted what was supposed to be a peaceful vigil,” organizer Valerie Hartshorn told reporters.

Unlike most of the counterdemonstrators in Charlottesville and elsewhere, members of antifa have shown no qualms about using their fists, sticks or canisters of pepper spray to meet an array of right-wing antagonists whom they call a fascist threat to American democracy. As explained this week by a dozen adherents of the movement, the ascendant new right in the country requires a physical response.

“People are starting to understand that neo-Nazis don’t care if you’re quiet, you’re peaceful,” said Emily Rose Nauert, a 20-year-old antifa member who became a symbol of the movement in April when a white nationalist leader punched her in the face during a melee near the University of California, Berkeley.

In contrast with that portrait, Brandy Daniels, a postdoctoral fellow at the University of Virginia who holds a doctorate in theology from Vanderbilt, told Chris Matthews of MSNBC's "Hardball" that antifa activists defended her and fellow faith leaders from a group of "white supremacist/nazis."

Charlottesville resident Dahlia Lithwick interviewed Daniels and several other witnesses for Slate. They praised antifa activists for interposing themselves between peaceful protesters and the alt-right's shock troops. Rev. Seth Wispelwey believes the antifas saved his life twice on Saturday from "men carrying weapons, shields, and Trump flags and sporting MAGA hats and Hitler salutes and waving Nazi flags and the pro-slavery 'stars and bars.'” He tells Lithwick:

A phalanx of neo-Nazis shoved right through our human wall with 3-foot-wide wooden shields, screaming and spitting homophobic slurs and obscenities at us. It was then that antifa stepped in to thwart them. They have their tools to achieve their purposes, and they are not ones I will personally use, but let me stress that our purposes were the same: block this violent tide and do not let it take the pedestal.

The white supremacists did not blink at violently plowing right through clergy, all of us dressed in full clerical garb. White supremacy is violence. I didn’t see any racial justice protesters with weapons; as for antifa, anything they brought I would only categorize as community defense tools and nothing more. Pretty much everyone I talk to agrees—including most clergy. My strong stance is that the weapon is and was white supremacy, and the white supremacists intentionally brought weapons to instigate violence.

Eyeroll here for the minister's using "community defense tools" as a euphemism for fists, sticks, and pepper spray.

Living as I do in the home state of Rev. William Barber, Moral Mondays, and the Greensboro lunch counter, violent confrontation feels like the wrong approach both tactically and politically. Yet no one should confuse those using violence to combat Nazis with Nazis. To do that would be to condemn the Allied effort to liberate Europe in WWII. But neither is this "full-on war," as Nauert believes.

What makes Nazis, Klansmen, and white nationalists worse than antifas is being Nazis, Klansmen, and white nationalists. But what makes them all punks is both groups arriving itching for a fight. This makes antifas look no different from the Sharks rumbling with the Jets over turf. That is the story the "both sides do it" press will run with. The alt-right just brings superior firepower.

Antifa's self-righteous aggression and anti-establishment militancy reinforce the veneer of patriotism for those claiming persecution while espousing race hatred, and furnishes them both cover they don't deserve and the battles they crave for growing their movement. Peaceful counterprotest throws the light of truth on the bad guys without muddying the waters. Violent confrontation won't stop alt-right bigots, only justify them. Violent confrontation gives them just what they want.

Certainly, the frustration is real that "white liberals are not up to the challenge of beating back right-wing extremists." But it wasn't white liberals primarily who beat back white, right-wing extremists in the 1960s anyway, but a multicultural coalition of dedicated faith leaders and social justice activists who rejected the notion that you needed violence in order to protect nonviolence. It was the spectacle of Bloody Sunday police violence against nonviolent protesters in Selma that shocked the nation's conscience and turned the tide in the battle for civil rights.

But to give antifas the benefit of the doubt, after government-sanctioned torture, repeated police shootings of unarmed black men, and a morally bankrupt president's white nationalist rallies, the question now is whether this nation has any conscience left to shock.