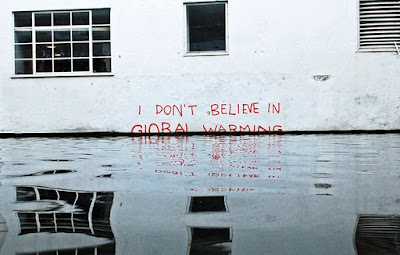 There is not much sunshine to be found in Houston this morning. And maybe two more feet of rain to come. "Harvey is now the benchmark disaster of record in the United States," writes Eric Holthaus at Politico. It is possible 40 to 60 inches of rain may fall on parts of Houston before tropical storm Harvey is done flooding the region:

Climate change is making rainstorms everywhere worse, but particularly on the Gulf Coast. Since the 1950s, Houston has seen a 167 percent increase in the frequency of the most intense downpours. Climate scientist Kevin Trenberth thinks that as much as 30 percent of the rainfall from Harvey is attributable to human-caused global warming. That means Harvey is a storm decades in the making.

This is Houston's third “500-year” flood in three years. That is not once in every 500 years, but a storm with a 1-in-500 chance of happening in any given year, Dara Lind explains at Vox. It is based on probability, not history. With climate change adding to the factors behind massive storms and rain events, it is hard to make predictions based on past events. Sort of like your 401k performance, if you think about it:

Theoretically, the odds of a 1-in-500 event occurring three straight times are one in 125 million. Because Houston is a big city and the same spots aren’t necessarily reaching 500-year levels each time, those odds don’t quite apply — but we’re still, as the Memorial City example shows, talking about events that FEMA estimates to be vanishingly unlikely.

Either Houston is incredibly unlucky or the risk of severe flooding is a lot more serious than the FEMA modeling has predicted — and the odds of a flood as bad as the ones Houston has seen for the past few years are actually much higher than 1 in 500.

The president who called climate change a hoax is expected to visit Texas today (but not Houston) to observe the effects of the hoax for himself.

The subheader on another Politico story speaks volumes: "New Jersey and New York lawmakers say they'll back disaster relief for Texas — even if Texas Republicans didn't help them in 2012."

"Many Texas reps and notoriously, @SenTedCruz fought against Sandy aid, so crucial to CT," said Rep. Jim Himes (D-Conn.). "Going with my better angels to fight FOR Texas aid."

The rare public rebuke by two fellow Republicans — and less surprising Democratic criticism — underscores the frustration felt by many lawmakers whose districts were similarly hammered by Sandy. New York and New Jersey ultimately received aid amounting to nearly $60 billion, but not until conservative lawmakers attempted to pay for the package with spending cuts to other domestic programs.

“No!” Cruz insisted. “Of course not. As I said at the time, hurricane funding is a very important federal responsibility. And I would have eagerly supported funding for that, but I didn’t think it was appropriate to engage in pork barrel spending, where two-thirds of that bill was unrelated to spending, that had nothing to do with Sandy and was simply politicians wasting money.”

“In Sandy, there were people in crisis and with Harvey, here, there are people in crisis,” the Texas Republican noted. “We need to focus on solving the problem and meeting people’s needs, not engaging in political games.”

Climate may change, but Ted Cruz? Never. Expect politicians to waste a lot of money in Texas post-Harvey with nary a complaint from Sens. Cruz and Cornyn.

Here is a list of ways you can help those affected by #Harvey https://t.co/vet65XtwOl