Of opioids and pitchforks by @BloggersRUs

Of opioids and pitchforks 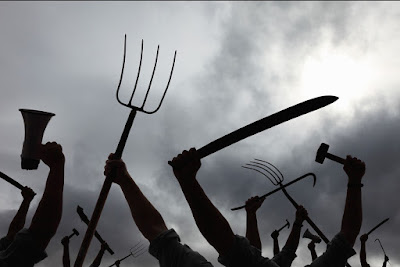 The opioid addiction epidemic is "a national health emergency," the sitting president declared in a White House appearance yesterday. The announcement fell short of an earlier promise to declare a national emergency which, the New York Times reports, "would have prompted the rapid allocation of federal funding to address the issue."

The crisis is man-made. A recent report by "60 Minutes" detailed how lax federal enforcement and corrupt practices by drug manufacturers that profit from opioid sales fueled the crisis. But there are deeper currents behind recent events that don't show up when the camera lights focus on this story or that.

"Republicans are propping up scammers and cheaters" is the headline on Catherine Rampell's Washington Post op-ed. Congress just upended the rule by the Consumer Financial Protection Bureau barring mandatory arbitration clauses in financial agreements. "In practice, this means firms can expect to cheat you with relative impunity," she writes. It is one among a list of regulations delayed or repealed by lawmakers that make it easier for corporate predators to do what they do best.

Axios reports that a backlash is brewing against big tech both from Washington and from consumers:

From the Trump base, Steve Bannon is railing against the "Lords of Silicon Valley," and advocating the regulation of the big tech companies as public utilities. The appeal resonates with rank-and-file Republicans, who broadly believe that Facebook and Google "have it out for them," a Bannon ally tells Axios. "They feel Facebook is weaponized against conservatives."

Tom Perriello, a former Democratic congressman from Virginia, tells Axios he sees a "tech-fueled groundswell" growing against the political establishment:

This is not a blue-red issue: At least in Virginia, the dual issues of automation and Amazonization resonate most fully with two groups — rural Trump supporters, and black urban Democrats. "These issues don't necessarily get raised unprompted," Perriello said of town halls he convenes. "But when you raise them, the whole room lights up."

Roger Altman writes at the Washington Post, "the greatest presidential election upset in modern U.S. history" may not have been a fluke never to be repeated. The election, he writes:

... likely signals a new era of extreme voter discontent and improbable national election results. Why? Because the so-called American Dream — that each generation would live better than its predecessor — has ended for most of our citizens. Half of the young adults in this country will earn less over their lifetimes than their parents did. Indeed, the whole idea of rising living standards, which defined this country for so long, is a thing of the past for most Americans. More and more voters realize this and are angry about it.

Adjusted for inflation, wages and purchasing power have been flat for 40 years. Real median household income has been flat since 1999. A quarter of adults cannot pay their monthly bills in full, Altman adds. The share of income going to the lowest 80 percent of earners is at a 100-year low.

There are two Americas, he writes, echoing John Edwards' famous 2004 stump speech. In 2008, they voted for hope and change, yet saw wrong-doers' fortunes grow even as their own fortunes sank further. The prosperity gap has widened to a chasm since 2008, and Americans who have run out of hope are self-medicating. And angry.

It's not simply anxiety over immigrants or the browning of America, although those prejudices run deep. But those are, in part, political misdirection fueled by elites to keep the pitchforks pointed in a safer direction. The result, Altman suggests, is a rebellion against the establishment and the election of our Twitterer-in-chief.

If you live in a place where the steel mills and the downtown stores closed twenty years ago, and the malls and the local hospital are closing today, it has been a long time since any national politician besides Trump seemed aware you existed. Indeed, if anyone in blue zone America noticed, whether on the left or the right, they were likely to conclude that it’s your own fault for being a racist or a slob or both.

Venture capitalist Nick Hanauer famously wrote three summers ago it was his ability to see future trends that made him rich. With the massive inequality overtaking the country, he wrote, "I see pitchforks":

But the problem isn’t that we have inequality. Some inequality is intrinsic to any high-functioning capitalist economy. The problem is that inequality is at historically high levels and getting worse every day. Our country is rapidly becoming less a capitalist society and more a feudal society. Unless our policies change dramatically, the middle class will disappear, and we will be back to late 18th-century France. Before the revolution.

Last fall was a kind of national, "Can you hear us now?" It's still unclear Washington did.