Disquiet on the western North Carolina front by @BloggersRUs 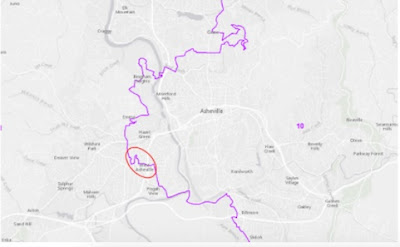 A left turn here. A right there. Up a block, over, then back. Several hundred citizens surveyed the front lines of high-tech gerrymandering yesterday by walking and running them through neighborhoods in Asheville, North Carolina. The local League of Women Voters sponsored the first Gerrymander 5k in this heavily Democratic city to drive home the reality of redistricting performed "with almost surgical precision."

In last year's presidential primary, I voted in North Carolina's 10th Congressional District. By November, I was in the 11th Congressional District. Again. That is where I had voted until the Republicans' first 2011 redistricting maps split the city in two. Multiple court challenges to those maps had the line flipping back and forth over my house. Not that the flipping improved my representation. Patrick McHenry, professional Republican, represents NC-10. Freedom Caucus chair Mark Meadows represents the 11th. 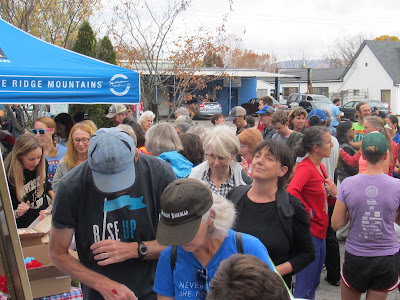 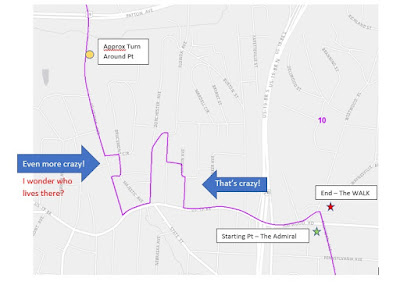 John Kennedy, a video producer and artist who first thought about holding a run in 2016, told the Guardian, “Democrats must have been asleep at the wheel when the Republicans took this gerrymandering to a whole new level.”

They were. In their hubris, state Democratic leaders rebuffed requests to move to nonpartisan redistricting when they had control. Terry Van Duyn has a story she tells here often:

Before state Sen. Terry Van Duyn, a Democrat, ran for office in North Carolina she lobbied against gerrymandering only to find out that her predecessor, Martin Nesbitt, a fellow Democrat, wasn’t so opposed when his party was drawing the maps.

"I would go to Raleigh every year and ask him to support nonpartisan redistricting," she said in an interview at her home in Asheville. "He would just lean back in his chair and say, 'Terry, Democrats draw great districts.'"

Now it is Republicans in control, and they are not bashful about the products of their designs. They are boastful:

"I acknowledge freely that this would be a political gerrymander, which is not against the law," state Rep. David Lewis, chairman of the House’s redistricting committee, is quoted as saying in a transcript of a committee meeting last year when the legislature was forced by courts to rework the maps again. "I propose that we draw the maps to give a partisan advantage to 10 Republicans and three Democrats because I do not believe it’s possible to draw a map with 11 Republicans and two Democrats."

That lawsuit notes that Democrats won 51 percent of statewide votes in 2012, but Republicans won nine of 13 seats, adding a tenth seat the next year with just a slim 53 percent majority of votes.

“It’s fundamentally messing with democracy,” Alana Pierce, president of the League of Women Voters of Asheville-Buncombe County, told the Guardian.

Calling Asheville "the best example of cracking in the country," David Daley, author of "Ratf**ked: Why Your Vote Doesn't Count," reinforced in yesterday's Asheville Citizen-Times why I harp on progressives' misplaced infatuation with the quadrennial presidential contest. The front-line battles are local and more frequent. Daley writes, Republicans "locked-in power by going down-ballot – and then drawing themselves such friendly, unbeatable districts that they’d control veto-proof supermajorities in many states even with fewer votes." President Bernie can't help with that. Neither can president Hillary.

On the ballot in Asheville Tuesday is a referendum on whether the city of 90,000 should accept or fight the city council districts forced on it by the GOP-controlled legislature this year:

The bill, which passed into law on June 29, requires Asheville to amend the city’s charter to implement six single-member election districts for seats on City Council by Nov. 1, a deadline Manheimer says the city has met. The law also establishes a Nov. 15 deadline for the city to draw the district lines.

Asheville’s not rushing to draw the lines, the mayor says. “We are in a bit of a showdown here with the legislature, because we haven’t taken any steps to draw lines, and we’re going to look at the outcome of the vote and decide what to do,” she explains.

In North Carolina, if your city is blue you are a target.

A federal court in April overturned as unconstitutional a similar, state-mandated redistricting plan for Greensboro. U.S. Middle District Judge Catherine Eagles ruled the districts had been drawn to give Republicans an advantage. “The appropriate remedy for a law that violates the one-person, one-vote principle is an injunction against elections conducted under the Act’s unconstitutional redistricting,” Eagles wrote.

After several failed efforts by the Republican legislature to correct unconstitutional racial gerrymanders in N.C. House and Senate districts, Eagles last week entered an order from a three-judge panel to have a "special master" redraw them instead. Republican objections were overruled.