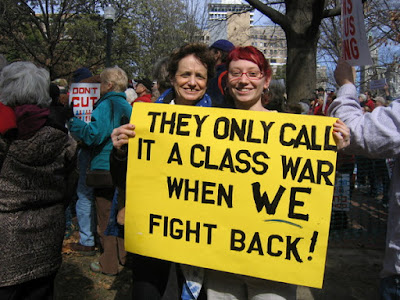 "We are engaged in class warfare. My side is winning." — Warren Buffett

Reading the details of the GOP tax plan is like watching that Volkswagen commercial where people look at zero scores and ask, "Really?"

Politicians who complain Americans are not competitive enough in the global marketplace want to tax tuition waivers for graduate students. Ben Miller of the Center for American Progress explains in Fortune that the bill eliminates credits and deductions for tuition, retraining and post-doctoral work to help pay for seven years of reduced taxes for millionaires and billionaires. And for the tax-free inheritances of the children of Donald Trump and Education Secretary Betsy DeVos.

By 2017, families annually earning between $10,000 and $75,000 will face increased taxes while those earning much more see their taxes go down. The mortgage interest deduction families use to pay for their homes and build wealth (supposedly a virtuous practice in the Conservative faith) goes away, as do deductions for state and local taxes that help families keep them, particularly in bluer states.

Tax cuts for workers are temporary. Tax cuts for corporations are permanent, and paid for in part by hundreds of billions of dollars of cuts to Medicare and Medicaid over 10 years.

Stan Collender at Forbes calls it "the start of a decades-long economic policy disaster unlike any other that has occurred in American history." Not to put too fine a point on it.

There's no economic justification whatsoever for a tax cut at this time. U.S. GDP is growing, unemployment is close to 4 percent (below what is commonly considered "full employment"), corporate profits are at record levels and stock markets are soaring. It makes no sense to add any federal government-induced stimulus to all this private sector-caused economic activity, let alone a tax cut as big as this one.

Nevertheless, the GOP is forging ahead with no idea what the impacts will be on the economy other than the unicorns and rainbows of trickle-down economics. No, the sitting president's alma mater isn't buying it either.

The details themselves can be distractions. Forest for the trees and all that. One thing not to be distracted by is the pearl clutching at the mention of "class war" by the people winning it.

Ryan Cooper writes at The Week, that if the "Republican donor class and their employees" want a class war, it's on:

It's honestly quite surprising to me that Republicans didn't just figure out the biggest deficit increase they could get away with, hand almost all of it to the top 1 percent, and throw a couple of pennies to everyone else to claim it's a "middle class tax cut." That was the George W. Bush political formula, and it worked quite well.

The only possible conclusion is that the plutocracy is no longer satisfied with taking almost all the income growth. They now want to diminish everyone else's share; as George Carlin once said, "they want more for themselves, and less for everybody else." The most notable victims reflect the cultural enemies that the Republican Grievance Industrial Complex has been whipping its base up in a frenzy over for decades — college students, coastal elites, and comfortable liberals — but the pain will be broadly shared. As Mike Konczal details, in broad terms it is an assault on workers to benefit capitalists: people who own things instead of working.

Once asked why he was bothering to steal a few barrels of oil out from under Native Americans in trailer homes, Charles Koch reportedly said, "I want my fair share – and that's all of it."

the Republican donor class wants class war. let's give them some https://t.co/yjCg4L6CoA pic.twitter.com/0cMIUL8tvu


I've heard enough. So has Cooper:

Some of the wealthiest and most privileged people who've ever existed are attempting to loot the pockets of penniless grad students so they can have even more money to spend on stuff like $450-million paintings. They've forfeited any right to deference or consideration.

Now that they have a rich, industrial-grade dupe in the White House and control of both houses of Congress, Collender believes Republicans are committing the economic equivalent of dousing the Capitol and themselves in gasoline and setting it all alight to watch it burn. In the 1960s, the tools of such people were turning fire hoses on black people. Time to return the favor.