The circus on Pennsylvania Avenue by @BloggersRUs

The circus on Pennsylvania Avenue 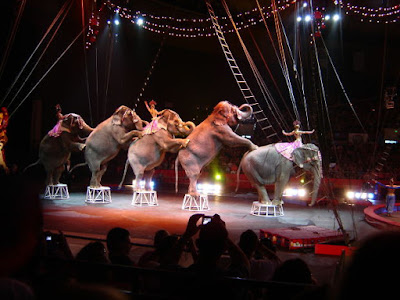 Former White House advisor Steve Bannon tells all to author Michael Wolff in his unreleased "Fire and Fury: Inside the Trump White House." In incendiary quotes in the Guardian, Bannon describes the Trump Tower meetings between the president's son and top campaign officials as "treasonous" and "unpatriotic." Of the ongoing investigation, Bannon says, "They're going to crack Don Junior like an egg on national TV."

Bannon adds that the Russia investigation is "all about money laundering" involving Paul Manafort, Don Jr and Jared Kushner. Says Bannon, "It’s as plain as a hair on your face."

It is important to note, as Slate news blogger Ben Mathis-Lilley does with a flurry of links, that quotes from Michael Wolff may not have the provenance they claim:

A 2004 New Republic profile of Wolff meanwhile noted that “the scenes in his columns aren’t recreated so much as created—springing from Wolff’s imagination rather than from actual knowledge of events.” The same piece quoted an editor who worked with Wolff as saying “his great gift is the appearance of intimate access. He is adroit at making the reader think that he has spent hours and days with his subject, when in fact he may have spent no time at all.” A 1998 article about Wolff’s book Burn Rate surfaced Wednesday by writer Brad Plumer notes that several of the subjects of the book say Wolff “invented or changed quotes” that were attributed to them.

Accurate or not, Cokie's Law applies. Jonathan Swan at Axios observes that in attacking family "Bannon touched the third rail of Trumpworld ."

Thus, reports of Bannon's comments took the sitting president's mind away from comparing Nuclear Button size with Kim Jong Un. In a statement too coherent for the boss, the White House responded, saying:

"Steve Bannon has nothing to do with me or my Presidency. When he was fired, he not only lost his job, he lost his mind. Steve was a staffer who worked for me after I had already won the nomination by defeating seventeen candidates, often described as the most talented field ever assembled in the Republican party.

"Now that he is on his own, Steve is learning that winning isn't as easy as I make it look. Steve had very little to do with our historic victory, which was delivered by the forgotten men and women of this country. Yet Steve had everything to do with the loss of a Senate seat in Alabama held for more than thirty years by Republicans. Steve doesn't represent my base—he's only in it for himself.

"Steve pretends to be at war with the media, which he calls the opposition party, yet he spent his time at the White House leaking false information to the media to make himself seem far more important than he was. It is the only thing he does well. Steve was rarely in a one-on-one meeting with me and only pretends to have had influence to fool a few people with no access and no clue, whom he helped write phony books.

"We have many great Republican members of Congress and candidates who are very supportive of the Make America Great Again agenda. Like me, they love the United States of America and are helping to finally take our country back and build it up, rather than simply seeking to burn it all down."

Washington DC is in a bit of a meltdown tonight.

The White House issued the statement before Trump's attorney sent Bannon a cease and desist letter:

Trump attorney Charles J. Harder of the firm Harder Mirell & Abrams LLP, said in a statement, "This law firm represents President Donald J. Trump and Donald J. Trump for President, Inc. On behalf of our clients, legal notice was issued today to Stephen K. Bannon, that his actions of communicating with author Michael Wolff regarding an upcoming book give rise to numerous legal claims including defamation by libel and slander, and breach of his written confidentiality and non-disparagement agreement with our clients. Legal action is imminent."

That would have to be an agreement with Donald J. Trump for President, Inc., since an NDA covering a White House employee would seem to be null and void, at least as it pertains to White House gossip.

While all that was going on, Trump found time yesterday to dissolve the voter fraud commission he set up to prove massive voter fraud had cost him the popular vote in 2016:

"It's a s--t show," said one White House adviser to CNN, adding that the commission went "off the rails."

Spoken from the center of the three-ring show that opened yesterday at 1600 Pennsylvania Avenue. To give Trump credit, the show is a spectacular.

But amidst the growing chaos and incoherence, speculation grows that, as we say down South, "He ain't right."

If he does have dementia, a medical condition, pointing it out would be politically incorrect in more polite circles. But since the occupant of the Oval Office objects to being politically correct, which would he think worse, blasting it out in tweets, or not?