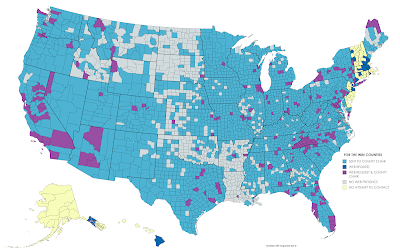 On Monday here at Hullabaloo, I wrote about the 1st Democratic Candidates Conference (DemCanCon) that took place last weekend outside Washington, D.C.

I met lots of what one trainer called "mom & pop" candidates: people who finally had enough and filed for office for the first time. Most have no idea what they've gotten into, but this conference offered to get them up to speed. About 250 attendees. A small, but enthusiastic group from 24 states.

After finding out where they were from and what they were running for, I asked what help (post-primary) they could expect from the local parties in their districts.

The question generally drew a pregnant pause, a sigh, and perhaps an eye roll.

They were from Maryland, Virginia, New York, Indiana and elsewhere. Almost without exception the same reaction.

It's why I wrote my For The Win get-out-the-vote primer for county officers.

Firsthand experience is behind it.

2006:
I visited a western NC county a week ahead of the congressional election (yes, Heath Shuler was top of the ticket that year) to check on their preparations. What had they done? What else did they need to do? What did they need from us?

"We called through the phone list and put out the signs."

They saw us looking sideways at each other. 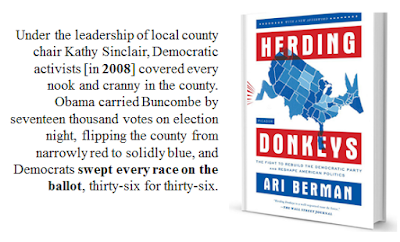 ​ 2014:
An experienced election protection attorney from Boston was in our headquarters on GOTV Weekend. On Election Day, he walks up 3 hrs before the polls close and says with some admiration, "I've never seen an operation like this."

When the polls closed, the county picked up two state legislative seats in a year when Democrats across the country got the shit kicked out of them.

2016:
Volunteers arrived in a 15-passenger van from Nashville on GOTV weekend. One had come from as far away as Memphis (IIRC). They'd given up on Tennessee and wanted a chance to help flip North Carolina blue.

After sizing up the place, one visitor said, "We don't have anything like this."

And isn't that the problem?

I explained it to candidates at DemCanCon this way.

If you're not in a swing state, especially if you're in a more rural county in not-a-swing-state (including blue states), Barack Obama isn't parachuting in a team from Michigan Avenue to show you how to do a high-energy, months-long, countywide GOTV and electioneering effort. The governor's race doesn't show up out there. The U.S. Senate race doesn't set up out there.

Want to know one reason why Democrats get no traction in the Plains States? I tried to email Kansas, South Dakota, and Montana counties yesterday and got pissed off. The white counties in otherwise red-shaded states are either unorganized or have no email or Facebook contact information on the state party websites (and probably not even a Facebook page not listed there). That's 40 percent of Kansas counties, half of Montana, and 70 percent of South Dakota. That's counties, not population, naturally. Okay, very rural, low-density areas I have the luxury of not trying to organize. And maybe it is because there are no Democrats out there. Even so. Those states elect U.S. senators. If Democrats don't show up to play, they forfeit. Look at south-central Georgia.

​ So, I don't want to hear "This is the most important election of our lifetime" again. Ever. Because if you think short-term, you never invest in the future. As they say around the office, "Why is there never time to do it right, but always time to do it over?" Democrats do it over — and over — on a two-year cycle, in many places starting each time from scratch.

Turnover from the DNC on down, plus killing off the 50-state strategy, keeps local teams from building over time. State parties teach local committees to pull poorly targeted call lists from VoteBuilder, pat them on the head, and send them on their way. Not good enough.

I'm sending links to county chairs across the country, bypassing state-party bottlenecks and concentrating on places Democratic muckety mucks ignore. It's a lead a horse to water effort. For The Win is not comprehensive, nor meant to be. We just need to lower the bar to higher performance.

Request a copy of For The Win, my county-level election mechanics primer, at forthewin.us.