A bullet in the head by @BloggersRUs

A bullet in the head 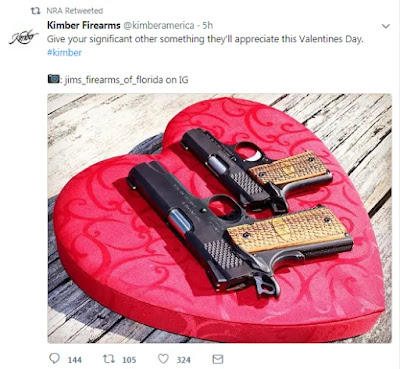 In this week's post-school-shooting clutter, this tweet from Full Frontal correspondent Ashley Nicole Black stood out:


Teens have been eating tide pods for like a month and legislators in multiple states have already introduced bills designed to make it harder for teens to get tide pods.


So in response to a threat to health and safety, some political leaders are prepared to act quickly. Like they did in Australia in three and a half months:

On this side of the Pacific, the president says we need to "tackle the difficult issue of mental health." Virginia Citizens Defense League (VCDL) president Philip Van Cleave agrees. The problem with mass shootings, he tells John Oliver in the video, is people.

The Washington Post's Max Boot agrees too. He reminds readers that just last year, Congress passed and the president signed a bill revoking an Obama-era regulation that would have made it harder for people with a mental illness to obtain firearms.

Boot writes, "No other country experiences this kind of terror on an ongoing basis — save places such as Afghanistan and Syria that are actually at war." Boot continues:

It simply beggars the imagination that Republicans, in thrall to the National Rifle Association, continue to insist there is no relationship between gun ownership and gun crime. Instead of effective regulations, they offer “thoughts and prayers,” as if mass shootings were acts of God like earthquakes and hurricanes that mere mortals are powerless to prevent. This was Sen. John Neely Kennedy (R.-La.) after the Las Vegas shooting: “I just hate to see this issue politicized. I don’t know why bad things happen to good people, but they do in this world, and what happened in Las Vegas was terrible. But we can’t legislate away every problem in the world.”

Nor do we. Instead, we put in place regulations to help protect consumers, communities and the environment, rules that make capitalist acts between consenting adults predictable and less risky. We pass laws to make food and cars safer. We hire police to enforce traffic laws, not believing law enforcement can stop every speeder, but because their presence and the threat of punishment tamps down speeding. We just refuse to do the same with firearms.

Politicians, primarily but not exclusively Republicans, are turning their idolatrous worship of the Second Amendment into a suicide pact. If the United States had been under assault from Muslim terrorists, they would have acted long ago. But apparently homegrown mass murderers are of scant concern even though they kill far more people than terrorists do.

To casual observers, especially to those in more civilized countries, a societal suicide pact might fall under the colloquial definition of crazy.

And yet mutual suicide appears to be Kimber Firearms' recommendation for a romantic way to celebrate Valentine's Day, his and hers hammers thoughtfully pre-cocked for a light, final trigger pull.


The NRA pulled down its retweet after the Florida school shooting on Wednesday. Kimber Firearms did as well.