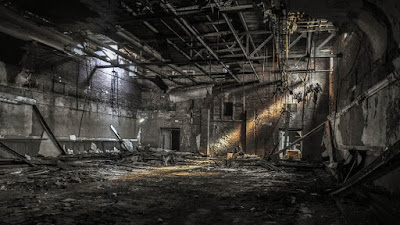 Cable news news junkies may fixate on the daily cliffhangers of the Beltway soaps. Elsewhere in the country, life goes on. Or doesn't.

Typical voters are not so much "low information" as, you know, busy. With jobs and kids and school and church and bills and after-school activities and numbing themselves for the next day of it with a few hours of mindless TV entertainment. A lot of voters have lives not centered in the Beltway. Democrats running in 2018 had best get in touch with that alternate reality. It may matter more to the fate of the country than what atrocities the Trump cult commits today.

While we in this business think we are in a fight for the country's soul, many of our neighbors are simply fighting to get by. The boosterish rhetoric coming out of Washington is soon going to ring a hollow. Sen. Majority Leader Mitch McConnell of Kentucky told Fox News last week, "2017 was the best year for conservatives in the 30 years that I've been here. The best year on all fronts." After pausing for a sip of Kool-Aid, McConnell added, "And a lot of people were shocked because we didn't know what we were getting with Donald Trump." (I added the Kool-Aid part.)

But the effects of drinking the Trump Kool-Aid will last only so long. Already, the "best year for conservatives" is proving to have been an illusion outside Washington.

Paper products giant Kimberly-Clark announced January 23 it is using its tax cut to cushion the costs of closing facilities. The Dallas-based maker of Kleenex, Huggies, and other products plans to let go between 5,000 and 5,500 workers:

Chief Financial Officer Maria Henry said the company’s gains from the tax overhaul would help offset the cost of the restructuring plan. The company had an effective tax rate of 28.6 percent in 2017, and the rate would drop to between 23 and 26 percent in 2018 as a result of congressional action, boosting year-over-year earnings growth by 6 percentage points, she told analysts during a conference call to discuss recent financial results.

“We also anticipate ongoing annual cash flow benefits from tax reform,” Henry said. “That provides us flexibility to continue to allocate significant capital to shareholders while we also fund increased capital spending and our restructuring program over the next few years.”

"In other words," explains the Arkansas Times, "it's taking tax savings to its shareholders' bottom line, not to workers." People notice things like that, even in Little Rock.

“We are moving to a global business services platform for our more transactional and standard work,” Henry said Tuesday. “And when you do that, when you think about it, we are removing a role that is in country, so we are paying the full severance on that position that we are taking out, and we are hiring that role in a different location in our shared services center.”

Rendered in English, Kimberly-Clark is offshoring U.S. office workers' jobs. Just in time for Republican tax cuts to show up in the paychecks they'll stop receiving.

Kimberly-Clark is not an outlier. Companies are doing what they always do after receiving a windfall: pocketing the extra profit and using it as a buffer for cutting costs and jobs. After all the hype over well-publicized bonuses, the kickbacks to workers barely moved the economy.

While Trump tweeted favorably about Fiat Chrysler moving production of the Ram Truck from Mexico to Michigan, the jobs don't represent any auto industry renaissance, reports the Detroit Free Press:

The president's focus on job creation won support from industrial heartland voters during his campaign. And in March 2017, he praised General Motors when he flew to Detroit to highlight the importance of American manufacturing. That same day, GM announced plans for 900 new or retained jobs in Michigan within 12 months.

Those are just two examples. One more. Unemployment among black workers so often touted as historically low by president Tump, is not. The L.A. Times Michael Hiltzik notes that unemployment figures among subgroups is typically volatile. Still, black unemployment "jumped to 7.7% in January, up from 6.8% in December and back nearly to its 7.8% level when President Trump took office."

There is a "fundamental imbalance in the U.S. job market" we have not addressed, Hiltzik writes. "Blacks get laid off faster than whites when the economy turns south, and they get hired back more slowly. That should set off alarm bells about the recession yet to come."

Furthermore, we have a crisis in the distribution of wealth that the economic policies of either party are failing to address. Henry Grabar writes at Slate, "By the numbers, America is splitting into two separate countries—a wealthy metropolitan country, and everywhere else—which poses challenges to everything from monetary policy to political consensus." Any effort to address those differences will begin in Washington, Grabar believes, arguing for revitalizing small cities nationwide:

In any case, the triumph of the coastal cities, as well as the rapid expansion of the Sun Belt sprawl, was not accidental or, in fact, inevitable—they were the results of high-level choices. One of my favorite pieces on the subject is Brian Feldman’s 2016 Washington Monthly story on how mergers hastened the decline of St. Louis by stripping the city of company headquarters. The policies that enabled that process could be revised, or even reversed.

Feldman argued that predatory monopolies and the policies they purchase in Washington have helped hollow out the center and concentrate wealth in places efficiently for business and very inefficiently for the well being of many Americans:

These decisions quietly changed the rules of America’s economy to be more like the NFL’s, in which monopoly power isn’t fought but catered to, in which economic opportunity isn’t disbursed but consolidated, in which fewer cities—and fewer Americans—get a fair chance to compete.

That, more so than the occupant of the Oval Office, bears on the lives of people who will vote this fall. Democrats expecting to rise a wave in November should not miss their chance to build it rather than wait to ride it.

“Kimberly-Clark, maker of paper products like Kleenex, Viva paper towels, Cottonelle bathroom tissue and Huggies diapers, announced earlier this month it would use its tax cut windfall to pay the costs of closing 10 factories and dumping as many as 5,500 workers.”