It's come to this by @BloggersRUs

It's come to this 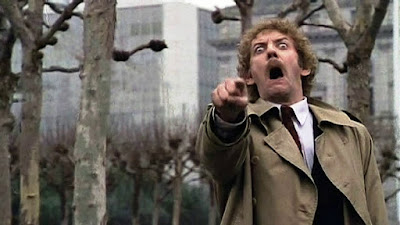 Donald Sutherland in still from Invasion of the Body Snatchers (1978).

The Devin Nunes memo released yesterday reminded me of a MAD magazine(?) parody of criticisms of the Warren Commission Report. That is reaching back long before digital records, but "1,001 Things Wrong With the Warren Report" included criticisms such as: the pictures are fuzzy; there's a smudge on pg. 47; and pages 342-343 stuck together in our copy.

Yet over material such as this we have President Trump's supporters calling for heads to roll at the FBI the way Trump's rallies chanted "Lock her up!" The Republican allegations center on whether a FISA surveillance application against Carter Page in October 2016 relied in any way on contents of an allegedly anti-Trump “Steele dossier” funded in part by the Clinton campaign.

Last night on MTP Daily, Rep. Mark Meadows (R-N.C.) and Rep. Jim Jordan (R-Ohio) tap-danced the soles off their shoes trying to undermine the FBI investigation into Carter Page and Russian interference in the 2016 election. How dare the FBI use allegedly tainted material to surveil a member of the Trump campaign who was — at other times — never really a member of the Trump campaign.

Never mind that the FBI had Page under surveillance as a possible Russian asset as far back as 2014. Never mind that a FISA filing might be 70 to 100 pages of corroborating documents reviewed by multiple federal judges over multiple renewals. Never mind that Counsel to the President Don McGann in his cover letter acknowledges the "Memorandum reflects the judgments of is congressional authors," and is thus an opinion piece. The memo is for Trump's palace guard proof of something. As they watch it draw closer to the president, Republicans are desperate to abort the Mueller investigation, thinking, as former congressman Todd Akin said in another context, they have "ways to try to shut the whole thing down."

The phoniness and cultish levels of unprincipled bad faith have reached toxic levels among the president's supporters on and off Capitol Hill. The experience is akin to watching humans turn into pod people in "Invasion of the Body Snatchers." Humans with whom we may have had political disagreements have been replaced with, what, pod Republicans? Where once there were public servants there are now servants of whom or what?

My full statement on the declassified memo: pic.twitter.com/eRo6ugpWQ9

In a short statement ahead of the memo's release, Arizona Sen. John McCain wrote:

“In 2016, the Russian government engaged in an elaborate plot to interfere in an American election and undermine our democracy. Russia employed the same tactics it has used to influence elections around the world, from France and Germany to Ukraine, Montenegro, and beyond. Putin’s regime launched cyberattacks and spread disinformation with the goal of sowing chaos and weakening faith in our institutions. And while we have no evidence that these efforts affected the outcome of our election, I fear they succeeded in fueling political discord and dividing us from one another.

“The latest attacks on the FBI and Department of Justice serve no American interests – no party’s, no president’s, only Putin’s. The American people deserve to know all of the facts surrounding Russia’s ongoing efforts to subvert our democracy, which is why Special Counsel Mueller’s investigation must proceed unimpeded. Our nation’s elected officials, including the president, must stop looking at this investigation through the warped lens of politics and manufacturing partisan sideshows. If we continue to undermine our own rule of law, we are doing Putin’s job for him.”

All well and good, but as with the few other sane-ish members of the Republican caucus left, McCain's statement is too little, too late. The breakdown has been a long time coming, as Chris Hayes reminded Twitter last night:

To people saying “This isn’t the GOP I know!” a gentle reminder that the GOP Chair of House Government Oversight in the 1990s ****shot watermelon with a pistol**** to reenact what he said was the president’s assasination of Vince Foster.


Hang up the phone.