Mapmaker, mapmaker, make me a map by @BloggersRUs 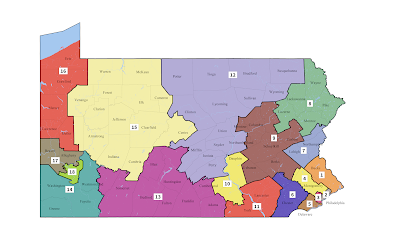 That "surgical precision" Republican legislators used to ensure congressional majorities is busting a lot of stitches. Pennsylvania's Supreme Court Monday issued its redrawn map for the state's gerrymandered districts to make them comply with its findings that the districts were “clearly, plainly, and palpably” out of compliance with the state Constitution.

The new map more closely reflects the partisan composition of the state, all but ensuring that Democrats will pick up several new U.S. House seats in November. It's also more compact than Republicans' original map, and it splits fewer counties and municipal areas — a key concern of the court as it sought to ensure voters' ability to participate in “free and equal” elections.

The original Republican-drawn map had become the butt of national jokes due to its reliance on strange, sprawling shapes to create a balance of electoral power heavily tilted toward the GOP. While Democratic candidates for the state's 18 U.S. House seats tend to capture about half of the statewide popular vote, that's translated into just five of the 18 seats in each election held since the 2011 redistricting.

A 2017 Brennan Center analysis estimated that gerrymandering in Pennsylvania gave Republicans an additional 3 seats in Congress. The study found:

• Michigan, North Carolina, and Pennsylvania consistently have the most extreme levels of partisan bias. Collectively, the distortion in their maps has accounted for seven to ten extra Republican seats in each of the three elections since the 2011 redistricting, amounting to one-third to one-half of the total partisan bias across the states we analyzed.

• Florida, Ohio, Texas, and Virginia have less severe partisan bias but jointly account for most of the remaining net extra Republican seats in the examined states.

Here's the PA congressional map that's been in place since 2011 (left) and the new one (right) pic.twitter.com/hdjk0Qx8Bg

The new map splits just 13 counties. The 2011 map drawn by the Pennsylvania GOP split 28. The new map is slated to be in place for the May 15 primary.

Republican lawmakers are expected to challenge the map in federal court, arguing that only lawmakers and the governor may draw legislative maps. But that argument has already failed in the U.S. Supreme Court.

[I'll note again for the record that owing to similar rulings against North Carolina's "near surgical" gerrymander, I voted in NC-10 in the 2016 primary and (without changing address) in NC-11 in the November election and survived the constitutional crisis. Granted, the NC primary was on March 15.]

Here's the PA congressional map that's been in place since 2011 (left) and the new one (right) pic.twitter.com/hdjk0Qx8Bg

Mimi McKenzie, legal director at the Public Interest Law Center, which helped represent the 18 Democratic voters who filed the suit, said voters in other states should be encouraged to bring similar suits.

“This case was always about the right to have your vote count. The Court’s order and remedial plan has restored Pennsylvania voters’ right to choose their congressional representatives in free and equal elections in 2018. We hope this remedial plan will inspire other states to protect their own voters from partisan gerrymandering,” McKenzie said in a statement.

Meanwhile, we await the Supreme Court's ruling in cases involving Wisconsin, Maryland and Texas on whether partisan gerrymanders are by definition unconstitutional.