Reading, writing and reloading by @BloggersRUs 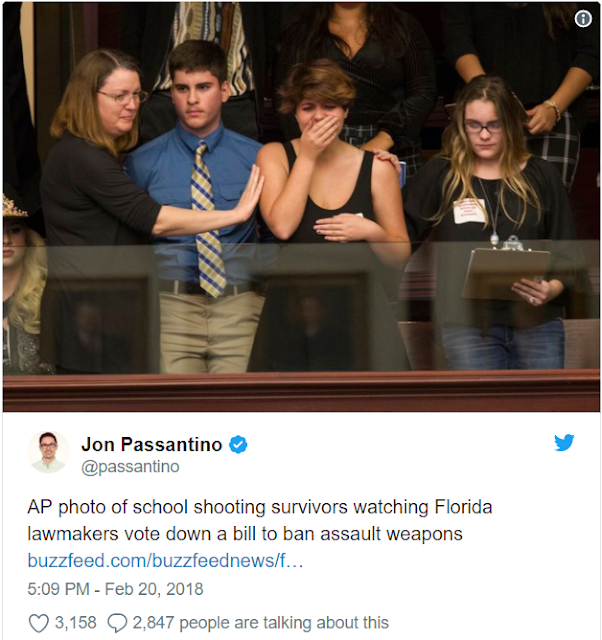 What kind of country, The New York Times asks, sends children off to school with bulletproof book bags strapped to their backs? The kind that would ask teachers to carry sidearms and add reloading to reading and 'riting and 'rithmetic, obviously. But it is also the kind where decades ago students maligned as "unwashed, longhaired traitors" mounted a movement to extract it from a disastrous military intervention in southeast Asia. Perhaps this generation can liberate the country from its obsession with guns:

To be effective, any movement needs a realistic program, not mere emotion. Otherwise, it risks coming and going in a flash with little to show for itself. A tighter federal system of background checks is a start, to better monitor would-be gun buyers with mental illness, for example, or histories of gun violence. Such a program should also include reinstating a nationwide ban on assault weapons — a state measure died in the Florida Legislature Tuesday — and ending an absurd prohibition against using federal public health funds to study gun violence.

Well, yes. Perhaps the Parkland, Florida shootings have tipped the balance, broken the camel's back, etc., on gun control, as the Times hopes, but that remains an open question. The activist tide that rose to resist Donald Trump will need to cohere like laser light and not, as so often happens on the left, quickly diffuse into a constellation of issue silos. The Russians sought to divide and conquer America in 2016. The left often does that to itself without help.

But there are signs the time is right. An organized #Resistance is already energized and in place. The public is primed for change. A Quinnipiac poll released yesterday finds that support for more gun control is at record levels:

Support for universal background checks is itself almost universal, 97 - 2 percent, including 97 - 3 percent among gun owners. Support for gun control on other questions is at its highest level since the Quinnipiac University Poll began focusing on this issue in the wake of the Sandy Hook massacre:

67 - 29 percent for a nationwide ban on the sale of assault weapons;
83 - 14 percent for a mandatory waiting period for all gun purchases. It is too easy to buy a gun in the U.S. today, American voters say 67 - 3 percent. If more people carried guns, the U.S. would be less safe, voters say 59 - 33 percent. Congress needs to do more to reduce gun violence, voters say 75 - 17 percent.

The trick will be to capitalize on the moment before it is gone.

Last night, a Kentucky Democrat won a special election to fill a state legislative seat left vacant by the suicide of Rep. Dan Johnson days after being accused of molesting a 17-year-old girl. Former state Rep. Linda Belcher defeated Johnson's widow 68 percent to 32 percent in a district Trump won by 49 points. It was the 37th such flip for Democrats since November 2016.

The NRA has been knocked back on its heels. The Conservative Political Action Conference (CPAC) is downplaying the appearance at this year's conference of the NRA's CEO and executive vice president, Wayne LaPierre. He will still speak, the Washington Examiner reports, but without any advance notice to draw attention or loud protests.

But yesterday, the Florida state House voted down a motion to take up legislation that would ban assault rifles in the state, killing the effort for this session. Moving quickly, Parkland students were on their way to Tallahassee to lobby for the measure. Opponents were quicker.

Public opinion may be on their side, but to beat the gun lobby, students just getting their feet wet in political action will need to be quick studies.