Trump holds his breath until he turns blue

Trump holds his breath until he turns blue 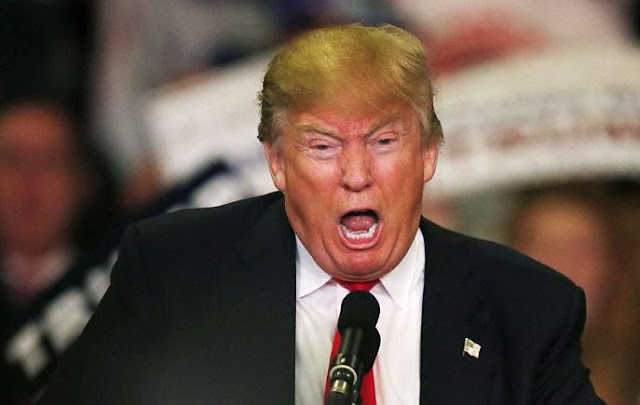 I wrote about the week-end tantrum for Salon this morning:

Attorney General Jeff Session fired former FBI deputy Director Andrew McCabe and the president couldn't have been more thrilled. In a characteristic display of puerile mendacity he tweeted out his glee for the world to see:


Andrew McCabe FIRED, a great day for the hard working men and women of the FBI - A great day for Democracy. Sanctimonious James Comey was his boss and made McCabe look like a choirboy. He knew all about the lies and corruption going on at the highest levels of the FBI!
— Donald J. Trump (@realDonaldTrump) March 17, 2018

As the House Intelligence Committee has concluded, there was no collusion between Russia and the Trump Campaign. As many are now finding out, however, there was tremendous leaking, lying and corruption at the highest levels of the FBI, Justice & State. #DrainTheSwamp
— Donald J. Trump (@realDonaldTrump) March 17, 2018

The Fake News is beside themselves that McCabe was caught, called out and fired. How many hundreds of thousands of dollars was given to wife’s campaign by Crooked H friend, Terry M, who was also under investigation? How many lies? How many leaks? Comey knew it all, and much more!
— Donald J. Trump (@realDonaldTrump) March 17, 2018

The Mueller probe should never have been started in that there was no collusion and there was no crime. It was based on fraudulent activities and a Fake Dossier paid for by Crooked Hillary and the DNC, and improperly used in FISA COURT for surveillance of my campaign. WITCH HUNT!
— Donald J. Trump (@realDonaldTrump) March 18, 2018

These tweets were so full of lies that they required a full fact check by the Washington Post's Glenn Kessler.  The short version? The investigation started before there was a Steele dossier when one of Trump's national security advisers got drunk and spilled to an Australian diplomat that the Russians told him they had dirt on Hillary Clinton. There's no reason to believe the FISA court did anything improper and there have been a boatload of indictments and guilty pleas of Trump associates. And that's not to mention that the Trump campaign and transition were bizarrely crawling with more Russians than the annual Red Square May Day parade and nobody can adequately explain it.

Michaels Isikoff and David Corn's new book "Russian Roulette" gives one possible explanation as to why Trump insists on telling those lies to explain the Russia investigation. Recall that on January 6th of 2017 the heads of the intelligence agencies gathered to tell Trump about the Russia investigation. After the meeting was over James Comey had the unpleasant task of meeting with the president-elect alone to tell him about the contents of the Steele dossier. After Comey left, Trump apparently exploded and told members of his staff that this meeting was an FBI shakedown to blackmail him. In other words, the Fox News fulminating over the Deep State being out to get him originated with Trump himself.

His paranoia runs so deep that anyone in government who isn't a loyalist cannot be trusted, especially Democratic career law enforcement employees who are all obviously in on the plot:


Why does the Mueller team have 13 hardened Democrats, some big Crooked Hillary supporters, and Zero Republicans? Another Dem recently added...does anyone think this is fair? And yet, there is NO COLLUSION!
— Donald J. Trump (@realDonaldTrump) March 18, 2018


It is against the law for Mueller to ask the political affiliation of anyone he hires but such things are of interest to Trump who proved that last spring when he asked Andrew McCabe if he voted for him and told him "ask your wife what it feels like to be a loser."

If there was any question about where Trump is headed, his lawyer John Dowd (who belatedly claimed he was only speaking for himself) came out after the announcement of McCabe's firing and said:


“I pray that Acting Attorney General Rosenstein will follow the brilliant and courageous example of the FBI Office of Professional Responsibility and Attorney General Jeff Sessions and bring an end to alleged Russia Collusion investigation manufactured by McCabe’s boss James Comey based upon a fraudulent and corrupt Dossier."


Let's just say that if Dowd was speaking for himself he seemed to be channeling the thought process and phraseology of his client with perfect precision channeling his client. This was meant as an offer Rosenstein couldn't refuse.

As agitated and manic as Trump's tweets were this week-end, it seemed clear that he was testing the waters.  The New York Times' Maggie Haberman explained,


Trump has always seen what he can get away with, and when there are no lasting consequences, he presses on further. Right now, he’s testing what Hill Rs will let him get away with re Mueller. And so far there’s silence from leadership.
— Maggie Haberman (@maggieNYT) March 18, 2018


She wrote a fuller analysis for the paper explaining that Trump is actually brimming with self-confidence now because he sees that there have been no dire consequences for his actions despite warnings to the contrary so he sees himself getting stronger and taking control. And from the quotes from Republicans in her story, his allies in the congress and elsewhere are impressed with his new take-charge attitude.

Congressman Peter King for instance, says he thinks the president is more relaxed now but he's also been  "frustrated by the fact that he feels like a lot of what he didn’t succeed at, or what hasn’t worked, is that he wasn’t allowed to be Trump." So he's decided to be Trump.

In this instance, what Trump has realized is that if he humiliates a member of his cabinet, tweets that someone should be fired and makes it clear that he wants someone gone, at some point he will simply wear down institutional resistance. Recall that he humiliated Comey by making sure the FBI director only found out he'd been fired by seeing it on TV. Just last week, Rex Tillerson was totally demeaned as he was shown the door, with John Kelly even telling the press he informed Tillerson he was fired while the latter was on the toilet. By taunting McCabe about his scheduled retirement, and then waiting until just a day before that to fire him, Trump demonstrated to everyone else in the bureau that they'd better not cross him.

We don't know whether there will be any fallout from the McCabe firing by congressional Republicans but if there is and it goes the way every other Trump assault on presidential norms has gone, it won't last. Still there were a few more antagonistic comments than usual.

Senator Lindsey Graham (R-SC) said if Trump fires Mueller "that would be the beginning of the end of his presidency." He also called for public hearings to explain the firing and allow McCabe to defend himself. Senate Judiciary Committee Chairman Chuck Grassley said the Mueller probe should be allowed to continue and responded to Graham's request for public hearings on the McCabe firing positively. Those two seem to be working in concert toward ends that are not entirely clear, what with their attacks on Christopher Steele and calls for a second Special Prosecutor, but perhaps this is on the up and up.

Sen. Marco Rubio, R-Fla., took the position that McCabe should have been allowed to retire, echoing the analysis in this article at Lawfare which points out that while nobody can say whether the charges against McCabe are reasonable until the report is released, this process appeared overly punitive and vindictive.
Surprisingly, the scourge of Benghazi, Trey Gowdy, had the most stinging criticism saying to Trump what millions of Americans are thinking every day:


If the allegation is collusion with the Russians, and there is no evidence of that, and you are innocent of that, act like it...if you've done nothing wrong, you should want the investigation to be as fulsome and thorough as possible.

Trump is on a roll and he's not likely to care in any case. The congressional Republicans have already shown their hand. Unless they're willing to impeach him he knows he can do what he wants. And so he is.