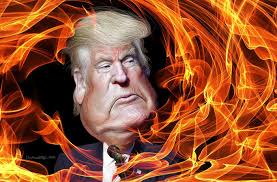 Via Mike Allen at Axios:


To White House insiders, this is the most dangerous phase of Donald Trump's presidency so far, from the brewing trade war with China that he denies is a trade war, to the perilously spontaneous summit with North Korea.

The big picture: Checks are being ignored or have been eliminated, and critics purged as the president is filling time by watching Fox, and by eating dinner with people who feed his ego and conspiracy theories, and who drink in his rants. Both sides are getting more polarized and dug in — making the daily reality more absurd, and the potential consequences less urgent and able to grab people’s serious attention.

Be smart: Trump’s closest confidants speak with an unusual level of concern, even alarm, and admit to being confused about what the president will do next — and why.
This is different than a few months ago, when they were more bemused and supportive.

Ian Bremmer, president founder of the Eurasia Group, tells me that a key point in his forthcoming book — "Us vs. Them: The Failure of Globalism," out April 24 — is that variations on these worries extend across the globe:

In places that include China and Russia, chief rival powers to the U.S., technology is "empowering top-down authoritarianism as liberal democracy weakens."

Bremmer, in a letter to clients, also makes a smart counter-case about Trump, who has had three foreign policy wins:

His success in applying pressure to North Korea, and getting China to join.

His strikes on Syria in response to chemical weapons use by Syrian President Bashar al-Assad.

In all three cases, Bremmer points out, Trump "managed to accomplish something that previous administrations had not":

The formula: a combination of spontaneity and unpredictability, and Trump's willingness to accept risk "in challenging a previous status quo in policy; and his acceptance of advice on actual policy implementation from experts."

But, but, but: Bremmer, after making those points, notes the greater dangers of this approach — a fear shared by many inside the White House.

Ok. But with the exception of the Syria strikes which were an anodyne foreign policy prescription that would have been taken by any president,  it's pretty early to declare those things "successes." China and North Korea coming together may or may not be an advantage and Trump himself is threatening to undo the South Korea trade deal every other minute so it's hard to say where that's going to come out.

The United States being unpredictable, bullying the world and keeping other countries off balance and unsure of whether we're going to blow up the planet may have precipitated world leaders treading carefully trying to figure out what's real and what isn't. But it won't last. A rogue superpower running roughshod will be undermined and eventually challenged. It's unsustainable.

Also,the president isn't -- shall we say -- cognizant of what he's doing. In fact,  he's a fucking moron. That doesn't mean that he can't accidentally succeed in some respects. But let's just say the odds are against him vaunted "instincts" being beneficial for all of us in the long run. His instincts are narrow and feral, informed only by watching TV and inborn prejudice. It will be a miracle if something terrible doesn't happen.