What Are The Costs and Consequences of Metal Detectors in Schools? @spockosbrain

What Are The Costs and Consequences of Metal Detectors in Schools?

Schools districts across the country are having town hall meetings to discuss school safety.  A number of solutions will be proposed. Unfortunately, sometimes the people with faulty solutions are great at selling them and getting funding for them. When people are afraid, they often write big checks to the people who claim to offer a solution.

Remember those nude X-ray scanners that were put in at airports? They didn't work. Scientists: Body Scanners Don’t Work, Corbett Was Right   Did you know that the Department of Homeland Security chief, Michael Chertoff, promoted the technology and Homeland Security placed the government’s first order, buying five Rapiscan scanners? Eventually the government bought over 300 of the machines that didn't work.

One of the suggestions people will make in these Town Halls will be for metal detectors. Lincoln Journal Star education reporter Margaret Reist asked Jon Sundermeier, Lincoln Public School Security Coordinator this question during a podcast about security for schools.

"Again, that's another community decision. If you think about when you visit the Lancaster County courthouse, if you look at the staff there, the amount of people that have to run one entrance. You could start to think 'Okay, expand that to every school and keep in mind that once you start using metal detectors you have to keep a school secure at all times or else people can bring things through other doors at other times. And with the amount of basketball games played after hours, the amount of CLC programing we have after hours.

Think of how the nature of schools would have to change if we want to take that step.

Again it's a community decision. The bottom line if you go to metal detectors there is a huge amount of culture change that would happen that would have to occur at the schools as well."

If this idea gets promoted, people who propose it should know what the costs and consequences are.

1) Cost per machine suitable for this? $3,000 to $4,000 (Source: U.S. Department of Justice, Office of Justice Programs, National Institute of Justice)

2) Staffing during the day and after hours. Sundermeier pointed out the need for multiple shifts because of basketball and evening CLC events.

Who pays for the ongoing cost? If there is no new tax, will the funding come from other budgets? Will it cut into current programs?

The initial cost is almost small compared to the ongoing costs. Let's look at an example from another state that illustrates this: 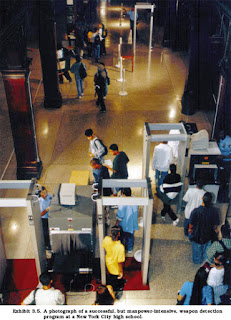 ...the weapon detection program run by the New York City (NYC) Board of Education in about 50 of its inner-city high schools (exhibit 3.5). For just one of its schools with about 2,000 students, the weapon detection program requires 9 security officers for approximately 2 hours each morning.
Two officers run the two initial portal metal detectors, two officers run the baggage x-ray machines, one officer runs the secondary portal metal detector for students who fail the initial detector, two officers (a male and a female) operate the hand scanners on students who fail the secondary metal detector, and two officers keep the students flowing smoothly and quickly through the system, such that nobody is able to bypass any part of the system.


It should be noted that the only way these schools are able to avoid huge waiting lines, even with this much equipment and this many officers, and still get everybody to class on time is by a complete restructuring of their class periods. There is a significant staggering of first period start times so that the students arrive over a 90-minute period.

On average, NYC school safety officials estimate that they fund approximately 100 additional security officer hours a week for each of their schools that screen for weapons.

I've found when you bring up hard numbers, the support for programs that offer few advantages and bring new problems often disappear. But right now I'm seeing the gun lobby getting both Democrats and Republicans to pay for the NRA's favorite "solution" for school security, more guns in schools.

The slaughter lobby knows that if someone else pays for a program, it's easier to implement. They also know that if people don't have to pay for a program they aren't as demanding about its effectiveness.

But what about the consequences? Sundermeier notes that the nature of schools would have to change. And that there is a huge amount of culture change that would happen.

Metal detectors are part of the "hardening" of schools program. I think that people should look at the consequences of these changes.

Here's Alex King, a senior at North Lawndale College Prep High School in Chicago. In a Teen Vogue op-ed he explained why “hardening” schools isn’t the answer to gun violence.

Trust me, where I’m from schools are already harder than you could imagine. We get up extra early every day to allow time to wait in line for the metal detectors. We’re disproportionately affected by zero-tolerance policies that funnel us into the school-to-prison pipeline. We already see armed police officers walking the halls and if you don’t understand why that alone can cause us stress, then you haven’t learned about the treatment of Laquan McDonald or Tamir Rice or Sandra Bland or Stephon Clark. You should.

As a proposed solution to mass shootings in schools, elected leaders want us to walk into classrooms where teachers carry loaded weapons? I challenge you to sit and learn about the history of civil rights with a clear mind while there are guns in your classroom. I challenge you to focus on studying statistics when you spend half your time trying not to become one.

I've been listening to legislators in other states talk about various programs for school safety. (Lawmakers Determined to Get More Guns In Schools) I've watched them talk about other state's experiences with programs, such as arming teachers, without knowing the details of the costs or consequences.

I've watched them push for armed police in schools (SROs) without looking at the true costs and  history of failures. They focus on preparing for an event that may never happen and put into place systems that bring new risks to schools, like armed teachers.


Did you know that there were never any consequences for selling a system to the American public that didn't work?  In 2010 Ron Paul said this on the House floor, as shown in this video. “I mean, here’s the guy who was the head of the TSA, selling the equipment. And the equipment’s questionable. We don’t even know if it works, and it may well be dangerous to our health.”

Imagine someone pushing a solution that didn't work, was expensive, changed the entire experience for the participants and introduced a new danger to people. A danger that didn't exist before it was introduced to the environment.

Sundermeier points out that putting in metal detectors is, "a community decision." But what happens when the community is basing their decisions on fear and bad information that is pushed by people with faulty solutions?

Fortunately some friends of mine in Lincoln put together a fair, evidence-based policy that places the burden of gun violence not on vulnerable children but on the adults who enable and profit from it.  It might be useful for other people who support of nonviolent, non-militarized school safety. (Link to document)

Humans can't do mind melds like I can. But I suggest you try to see the world through the eyes of someone like Alex King, who understands why "hardening" schools won't stop violence and school shootings.