Only mostly dead by @BloggersRUs 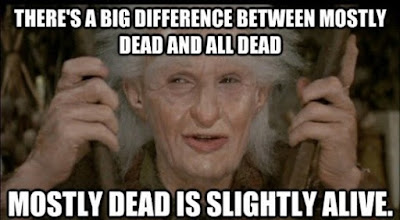 Given that Uncle Sam is supporting bombing a starving population in Yemen and teargassing desperate migrants on the Mexico/U.S border, these may be small lights in the darkness, but take what you can get. Two items this morning on how the United States sees itself, or still wants to. The U-S-of-A may be only mostly dead.

The noxious civil asset forfeiture practice police agencies made a regular feature of drug enforcement thirty years ago is under challenge in the U.S. Supreme Court. "Policing for profit" at long last is on trial.

The state of Indiana confiscated Tyson Timbs' $42,000 Land Rover after arresting him for selling $400 worth of heroin to undercover cops. The vehicle is more than four times the amount of fine assessed for the crime, and Timbs sued to get back his vehicle. A trial court agreed the "fine" in this case was excessive. An appeals court agreed.

Indiana's state Supreme Court ruled, however, that the Constitution's ban on excessive fines (Eighth Amendment) does not enjoin the states from imposing them. U.S. Supreme Court justices from across the ideological spectrum challenged that assertion on Wednesday when the case came before the high court.

There is little doubt that the justices will use Timbs to incorporate the clause at long last. Under long-standing precedent, a right that is “fundamental” to “ordered liberty” and “deeply rooted” in history receives protection under the 14th Amendment. And in its extraordinary brief, the Institute for Justice—the libertarian firm representing Timbs—demonstrates that the right against excessive fines checks both boxes. It was enshrined in the Magna Carta and safeguarded by most state constitutions when the U.S. Constitution was ratified. When Congress wrote the 14th Amendment, lawmakers argued that it would nullify “Black Codes” in Southern states that levied crippling, arbitrary fines on newly freed slaves. There is really no plausible argument that the right against excessive fines is not “fundamental” or “deeply rooted” and thus incorporated against the states.

Questioning on Wednesday did not go well for Indiana, as NPR's audio coverage confirms. Justices hammered Indiana Solicitor General Thomas Fisher who struggled to justify the practice finally before the Supreme Court.

Decades of states blurring the lines between who is a criminal and who is the law, I'd argue, has contributed to the widespread lack of trust in government that has led us to the Trump era. A ruling to quash civil asset forfeiture would begin restoring that trust.

Next up: "Nearly all of the world’s 180-plus countries include the term education in their constitution," Alia Wong explains in The Atlantic. A class-action lawsuit filed in Rhode Island seeks to include education as a right in the one major holdout nation: yours:

The 14 plaintiffs in Cook v. Raimondo, all public-school students or parents on behalf of their children, accuse the state of Rhode Island of providing an education so inferior that the state has failed to fulfill its duties under the U.S. Constitution. But given that there is no explicit guarantee of education in the Constitution, the lawyers are making a sort of bank-shot argument: that in denying citizens of Rhode Island a quality education, the state is in essence preventing people from exercising their Constitutional rights, such as forming a legal assembly (as is guaranteed by the First Amendment) or voting (as is guaranteed by the Fifteenth). That this denial falls unevenly across the population is a violation of the Fourteenth Amendment, which promises people equal protection under the law. As of Wednesday afternoon, none of the defendants offered comment on the suit.

The absence of an explicit right to education in the Constitution is not some mere oversight but is instead the result of the country’s federalist system of government: Schooling in America is not the domain of the federal government, but rather the domain of states, all 50 of which mandate in their individual constitutions the provision of public education. This decentralized approach has its benefits: Local governments control their local schools, and parents in any one place can more easily involve themselves in educational policy than they could if those policies were national. But one consequence, many observers contend, is that school funding varies hugely from region to region, often with those who have the greatest need getting the least. With close to half of education spending coming from local property-tax revenue, a child’s zip code has a huge bearing on the quality of her schooling.

Court fights over this inequality have been fought for years in state courts. A favorable federal court ruling in Cook v. Raimondo, litigants hope, "can appeal not just to liberals who are more inclined toward the establishment of a national right to education, but also to conservatives who’ve long advocated for improved civics education." Not to mention it could result in more equitable education across states and districts. It is a shrewd strategy.

Should the Supreme Court rule against policing for profit, perhaps it will be of a mood later to prohibit public education for profit (looking at you, charter school movement) and to restore civics in schools. Don't hold your breath. Still, these two cases suggest our institutions may only be mostly dead. Don't throw out that old bellows just yet.