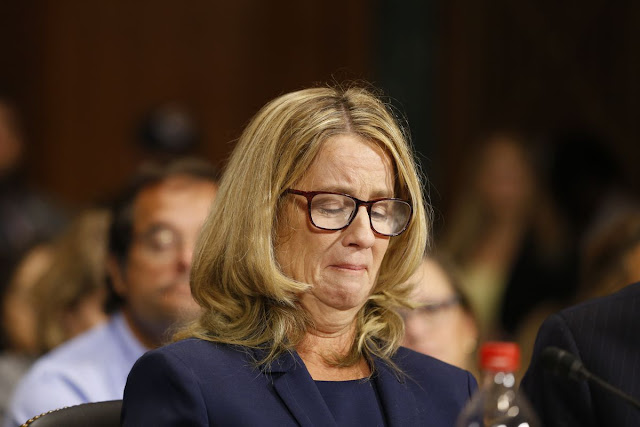 This is just sad:

More than a month after testifying before the Senate Judiciary Committee, Christine Blasey Ford is still getting death threats.

Ford told the committee that then-Supreme Court nominee Brett Kavanaugh had sexually assaulted her when the two were in high school in the 1980s. Now, her lawyers said in a statement to NPR on Thursday, “Justice Kavanaugh ascended to the Supreme Court, but the threats to Dr. Ford continue.”

Because of the abuse she’s receiving, Ford has had to move four times. She can’t go to work as a professor at Palo Alto University, and it’s unclear when she’ll be able to return, according to NPR. She needs a private security detail.

Like so much about the hearings and their aftermath, the threats send a message to survivors, especially if they are women: If you speak up, you will be punished. It’s an old message, but one that’s just as powerful in the #MeToo era as it was for years before. The only thing more powerful might be the voices of survivors themselves.
[...]
Threats like those Ford received — especially those posted publicly online — aren’t just a crime against her. They also serve to keep other survivors quiet. In some ways, they resemble the Gamergate campaigns against women who spoke out about sexism in video games — public harassment directed at those who challenge the established order can be a way of discouraging future challengers and keeping that order in place.

In the case of Gamergate, to some degree, it worked — Brianna Wu, a game developer who was targeted by Gamergate harassers and later ran for Congress, told me in September that many women in the video game industry chose not to speak publicly about Gamergate for fear that their children would be targeted for harassment. Threats like the ones Ford is getting, then, are not only a way of punishing her for the past — they’re also about ensuring the future the threateners want.

The threats are just one way Ford was made to suffer for coming forward with her allegation against Kavanaugh. She had to testify before the Senate Judiciary Committee in a hearing that pitted her against Kavanaugh with no additional witnesses or FBI investigation — and the investigation that followed the hearing was so limited in scope that it was essentially doomed from the beginning. She was mocked by the president in front of an audience of thousands. Before, during, and after the hearing, Senate Republicans essentially erased Ford, spinning her allegations as a plot by Democrats.

Before going public with her allegations, Ford said she asked herself, “Why suffer through the annihilation if it’s not going to matter?”

The question has become famous, in part because it was so prescient — in many ways, Ford was annihilated, and in many ways, it didn’t matter.

The threats, the mockery, the way Republicans treated Ford as though she didn’t even exist, the fact that Kavanaugh sits in a mahogany chair at the Supreme Court while Ford can’t even go to work — all send a message to other survivors that if they come forward, they risk being annihilated too.
[...]
To some degree, the threats Ford is receiving now are a grisly reminder of how consequential her testimony actually was. It came very close to keeping a powerful man from becoming even more powerful.

If Ford had truly been annihilated, if she’d had no impact, then she might be allowed to fade into obscurity. But those threatening her likely know that, even with Kavanaugh on the Supreme Court, Ford has set an enduring example to survivors, who stand with her even now.

That's a very positive spin. In reality, it seems to me that it's more of the same old same old.

I'm reminded of this harrowing story about a girl who reported her rape and was tortured by her community for it.