Trump takes revenge against states and territories he doesn't like

Trump takes revenge against states and territories he doesn't like 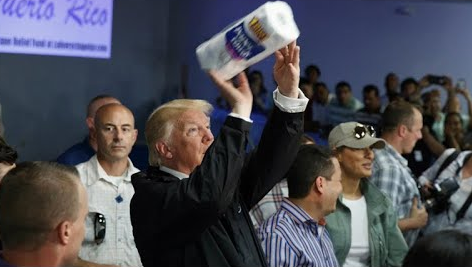 That would specifically be California and Puerto Rico. If the citizens of those places want federal support they're going to have to kiss his ... ring, and do it vigorously:

President Trump doesn't want to give Puerto Rico any more federal money for its recovery from Hurricane Maria, White House officials have told congressional appropriators and leadership. This is because he claims, without evidence, that the island’s government is using federal disaster relief money to pay off debt.

Trump also told senior officials last month that he would like to claw back some of the federal money Congress has already set aside for Puerto Rico's disaster recovery, claiming mismanagement.

In late October, Trump grew furious after reading a Wall Street Journal article by Matt Wirz, according to five sources familiar with the president's reaction. The article said that "Puerto Rico bond prices soared ... after the federal oversight board that runs the U.S. territory’s finances released a revised fiscal plan that raises expectations for disaster funding and economic growth."

Sources with direct knowledge told me Trump concluded — without evidence — that Puerto Rico's government was scamming federal disaster funds to pay down its debt.

On Oct. 23, Trump falsely claimed in a tweet that Puerto Rico's "inept politicians are trying to use the massive and ridiculously high amounts of hurricane/disaster funding to pay off other obligations."


A third source said Trump told top officials in an October meeting that he wanted to claw back congressional funds that had previously been set aside for Puerto Rico's recovery. "He's always been pissed off by Puerto Rico," the source added.

Trump's wariness about sending federal money to Puerto Rico dates back to the beginning of his administration. In early 2017, when negotiating the omnibus spending bill, Democratic congressional leaders were pushing Trump to bail out Puerto Rico's underfunded health care system that serves the island's poorest citizens.
Trump insisted in the negotiations that he wouldn't approve anything close to the level of funds Nancy Pelosi and other Democrats requested, according to two sources involved. (And he didn't.)

Can you believe this man whose various businesses went bankrupt four times has the gall to say anything about anyone else's "mismanagement" of finances? Especially when he's practically illiterate and can't even properly read a fucking newspaper article?

There's going to be a big fight over this. And he'll probably win as the lame-duck GOP congress crawls over broken glass to suck up to their Dear Leader.

Congress took steps to keep disaster relief funds from being used to pay down the island's debt, and as Bloomberg reported at the time, "neither the island's leaders — nor the board installed by the U.S. to oversee its budget — are proposing using disaster recovery aid to directly pay off bondholders or other lenders."

Congress will have to pass a new package of spending bills in December. Hill sources say the package may include a bill to send more federal money to disaster areas. Trump has told aides he believes too much federal money has already gone to Puerto Rico — more than $6 billion for Hurricane Maria so far, according to FEMA. (The government projects more than $55 billion from FEMA's disaster relief fund will ultimately be spent on Maria's recovery.)

In comparison, per the NYT, "when Hurricane Katrina hit the Gulf Coast in 2005, Congress approved $10 billion for the Federal Emergency Management Agency four days later, and another $50 billion six days later. The federal government is still spending money on Katrina assistance, more than 12 years after the storm’s landfall."
The fight won't just be over Puerto Rico either:

Trump often blames Democratic-controlled states for the fallout from their natural disasters. On Saturday, Trump threatened "no more Fed payments" for California to deal with its deadly fires unless the state addresses what Trump claims is "gross mismanagement of the forests."

At least 23 people have died because of California's historically destructive wildfires over the past few days.
Around 3,000 people died in Puerto Rico because of Hurricane Maria, according to government estimates. Trump, without evidence, has claimed this is fake news designed to make him look bad.
I guess we should be grateful that a couple of his most trusted henchmen, Kevin "My Kevin" McCarthy and Devin Nunes are from California. But frankly, I'm not sure that even matters much anymore. Now that he's lost the House he's going to be asking, "what have you done for me lately?"

This is disgusting. But what else is new. The world is now being run by the whim of a man with the mind of a 6-year-old and the character of a mob boss. Saddam Hussein was much more sophisticated.