... and this is now by BloggersRUs 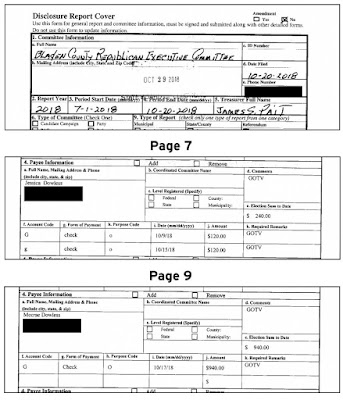 After a Buncombe County, NC election recount in 2012, a colleague observed T-party members are convinced if they lose an election it must be because their opponents cheated. It's almost Freudian.

On Wednesday, the North Carolina State Board of Elections confirmed it has issued subpoenas in the largest election fraud investigation in recent memory. Evidence surfaced in the NC-9 race that a team paid by Republican candidate and pastor, Mark Harris, had been illegally collecting absentee ballots from voters. Some of those ballots may have been destroyed. Harris's campaign, Red Dome Group, and Bladen County Sheriff Jim McVicker's campaign are a focus of state investigators.

The Board has refused to certify the results, pending a formal hearing on "claims of numerous irregularities" and "concerted fraudulent activities related to absentee mail ballots." Harris led Democrat Dan McCready by 905 votes until Bladen County residents provided affidavits stating workers came to their doors and collected incomplete and unsealed absentee ballots.

The Board has the power to call a new election. The hearing must take place by Dec. 21.

Jessica Dowless described the scene in the small office at the intersection of two highways, where she worked on Harris’s behalf for the last two months as chaotic. One worker, she said, “was so fucking high the other day she passed out at the fucking computer.” One of the workers who collected absentee ballots from residents was a “pill head,” she said.

Dowless, whose husband is distantly related to McCrae Dowless, described herself as a “housewife [who] needed a part-time job” and said she was one of about six employees. She often worked six days a week tallying the number of Democrats and Republicans who had recently voted. However, she explained, there were times when she did not quite understand what she was doing or what the grand purpose was.

She did say, though, that campaign workers delivered sealed absentee ballots from the homes of people who requested them to McCrae Dowless’s office — though North Carolina law forbids third parties from handling those ballots.

McCrae had "wads and wads of cash," for paying workers and even bought one woman a car to use after a week in the office, Jessica Dowless told BuzzFeed. Public records show the Bladen County Republican Executive Committee paid Jessica Dowless $240 and McCrae Dowless $940. WSOC-TV Charlotte reports the Harris campaign paid Red Dome more than $428,000. The North Carolina political consultant group in turn hired Dowless.

Dallas Woodhouse, executive chairman of the North Carolina Republican Party, spoke gravely of the issue of election fraud in 2016 during recounts of a close race between Republican incumbent governor Pat McCrory and Democrat Roy Cooper:

“Should the election board find that these are absentee ballot mills, with the purpose of fraudulent voting, those people should go to jail,” he told the radio show [This American Life]. “They should spend the first term of the Trump administration behind bars.”

Now Woodhouse sings a different tune and accuses Democrats of trying to steal the NC-9 election. From the Washington Post:

“We think they have abused their discretion and violated the statute,” Woodhouse said of the bipartisan election board on Nov. 27, the day it declined to certify Harris as the victor. “This will inevitably end up in court. The fact of the matter is Mark Harris won the race. He got more votes.”

On Twitter, he pointed to a culprit: “The democrats decided not to certify the results," he wrote, “and everyone know[s] it.”

It is a familiar play from an old playbook, “Admit nothing, deny everything, launch counterattack.” Roger Stone's playbook.

North Carolina is the pointed end of Republican efforts nationally to restrict access to voting to quell a supposed epidemic of voter fraud for which there is no evidence.

Nationally, the specter of voter fraud has also become a fixation for Republicans. But many of the prominent party officials who have complained about supposed voting issues, such as Sen. Marco Rubio (Fla.), House Speaker Paul D. Ryan (Wis.) and Kansas Secretary of State Kris Kobach have remained silent about the investigation in North Carolina. President Trump, who has made unsupported conspiracy theories and unfounded claims about fraudulent votes a hallmark of his presidency, also has said nothing about the issue in the state.

You really should read the whole BuzzFeed story.