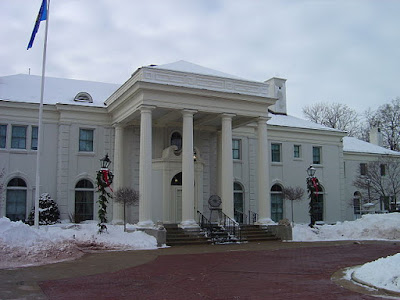 However history judges President George H.W. Bush's career, the handwritten note wishing incoming Democrat Bill Clinton well showed a respect for the office and for the people's will markedly lacking among what passes for conservatives today. Left upon Bush's leaving the White House in defeat and widely read again at his recent death, the note may have tweaked a Republican conscience or two. “Your success now is our country’s success,” Bush wrote. “I am rooting hard for you.”

Charlie Sykes, the conservative commentator and erstwhile supporter of Wisconsin Gov. Scott Walker, advises Walker in The Atlantic to consider how history will judge him. The Republican-dominated legislature in a lame-duck session last week passed a package of bills undercutting the powers of incoming Democrat Tony Evers who defeated Walker in November.

Besides attempting yet again to limit voting in Wisconsin, the legislation forces Evers to pursue the state's lawsuit against Obamacare, attacks preexisting conditions protections, and codifies Walker's work requirements for Medicaid recipients. The legislation is "petty, vindictive, and self-destructive," Sykes writes, and "worse than a crime. It was a blunder." Signing it, Sykes advises, would be "a huge mistake."

“It’s the wrong time to do it. It's not done for the right reason. It is not transparent. It is not a good way to create public policy," McCallum said.

There are going to be differences over executive control and legislative control, but you don’t play it out in the dark of night. You don’t make the changes after an election without hearings, without having the public involved, without having a vetting process. You can understand why there is frustration by the public with the system.”

Michigan and North Carolina Republicans need to hear the same message as they pursue rearguard actions. Republicans will argue they are protecting their legislative gains and limiting executive power they saw no reason to limit while a Republican was governor. They will argue Democrats did it too, years ago. But to Sykes and to the public the effort looks more about "tribalism and a petty will to power."

There is a reason for that. It is.

Conservatives as a movement acting through the Republican Party long ago decided the only Real America is their America. Multiracial and multi-ethnic, Democrats are by definition illegitimate. Democrats as a political party long ago rejected segregation and the white dominance of their Jim Crow past. Those who would not became Republicans (although in pockets many never changed their registrations).

Now those Republicans emulate the Redeemer culture of the Reconstruction South in moving to ensure through radical gerrymandering and gamesmanship one-party rule: theirs. Walker wears the brand already. History will be unkind, Sykes warns, if his old friend signs these bills and leaves office in a manner that is "essentially classless." Evers is not optimistic.