The fringe is now the mainstream by @BloggersRUs

The fringe is now the mainstream 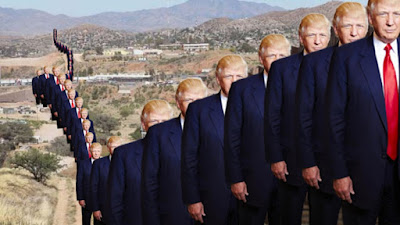 The sitting president's obsession with a border wall has come to resemble President George W. Bush's fascination with tax cuts. Tax cuts are the cure for whatever ails ya. Reducing taxes would grow the economy, create jobs, and "make the pie higher," per one of his most famous Bushisms. When those things didn't manifest, it simply meant we needed another tax cut. Come to think of it, Republicans still believe that.

For Donald Trump, whatever the problem: more wall.

“Time to get tough on Border Security. Build the Wall!” Trump tweeted after a California police officer was shot and killed during a traffic stop early Wednesday. The Stanislaus County sheriff's department believes the suspect to be in the U.S. illegally. If that guess proves wrong, it won't matter. Trump will call again for the wall.

With a quarter of the federal government shut down over funding for a 2,000-mile horizontal Trump Tower, Democrats preparing to take control of the U.S. House next week see no need to cut one of Trump's infamous deals, Politico reports:

House Minority Leader Nancy Pelosi (D-Calif.) and her top lieutenants are considering several options that would refuse Trump the $5 billion he’s demanded for the wall and send hundreds of thousands of furloughed federal employees back to work, according to senior Democratic sources.

While the strategy is fluid, House Democrats hope to pass a funding bill shortly after members are sworn in. They believe that would put pressure on Senate Majority Leader Mitch McConnell (R-Ky.) to follow suit. And they’re confident that their political leverage will only increase the longer the shutdown lasts — a notion that some GOP leaders privately agree with.

Part of the problem is the lack of gestalt for "wall." What constitutes "a wall, a fence, whatever"? Trump himself cannot say, writes Eric Levitz, since he cannot explain expressly what it is for:

Of course, the president has offered many dishonest rationales for his signature policy idea. He’s posited the wall as a means of keeping large numbers of Central Americans from seeking asylum in the United States, blocking dangerous narcotics from entering the country, and reducing illegal border crossings.

But building a giant wall across the southern border is not a rational policy solution to any of those (putative) problems. The migrant caravans that Trump loves to demonize don’t aim to sneak across unguarded borderlands. Rather, they tend to march (in conspicuously large numbers) right up to heavily guarded ports of entry because they believe they have legal grounds for seeking asylum in the U.S. Reforming domestic and international laws on the rights of asylum seekers — and/or devising some kind of “Marshall Plan for the Northern Triangle” — would be plausible responses to Trump’s stated concerns on “caravans.” Stacking concrete in the desert is not.

What the wall was for was getting Trump elected, for setting himself apart from the party apparatchiks sharing the stage with him during early Republican debates, for showing white nationalists among the GOP base who would be tougher on non-natives than his fellow contestants. That's how he sees the presidency. It's a game show he has to win. For himself, not for anyone else.

But the point of Trump’s wall has always been symbolic. The policy was “designed” to give visceral expression to the far right’s xenophobia — and thus, to trigger the libs, flummox the “cucks,” and authenticate Trump’s solidarity with the GOP’s perennially betrayed nativist contingent. The wall is meant to serve as a monument to red America’s triumph in one front of the culture wars. As such, the wall can never be realized through a grand, bipartisan bargain.

A majority of Americans may believe Trump is to blame for the government shutdown, but they are not the Americans Trump fears. Trump needs the wall to hang onto the core 35 percent of his base for reelection. What keeps him from backing down, Eugene Robinson insists, is not principle or determination, "It’s simple fear."

Former Wall Street Journal op-ed editor and Weekly Standard contributor Max Boot told David Corn he left the Republican Party when he realized to his horror there were far more racists among the GOP's base than he in his pundit's bunker had thought. There was once a difference between Republicans' campaign rhetoric and how Republicans actually governed, Boot thought. They would blow dog whistles to rally their voters, then not really deliver on the "white-power agenda" they teased to get elected:

Trump exploited that, because he has no compunctions about doing in office the kind of things that previous Republican standard-bearers only hinted at on the campaign trail. And he is tapping into frustration in ranks with what they see as being RINOs, as Republicans in Name Only. What I think they mean by that is candidates who did not deliver on the kind of racist, xenophobic, white-power agenda that a lot of Republicans would actually like to see. Before Donald Trump, the Republican Party was a majority conservative party with a white nationalist fringe. Now it’s a white nationalist party with a conservative fringe.

There are enough anti-Trumpers left for a dinner party, but not for a political party, Boot admits. He'd stayed in his lane and blocked out the craziness until the country elected Trump.

Trump's white nationalist party, the Democracy Optional Party, Donald's Own Party wants its wall. He dares not make them angry at him. He sold them on wall. They want wall.


If you value what we write here, I hope you'll consider supporting the blog with a couple of bucks. If you've already donated, I thank you from the bottom of my heart. If you haven't and would like to, the paypal buttons are on the sidebar and below as is the snail mail address.

Buckle up everybody. It's going to be a very bumpy New Year ...