Your Tuesday heavily redacted by @BloggersRUs 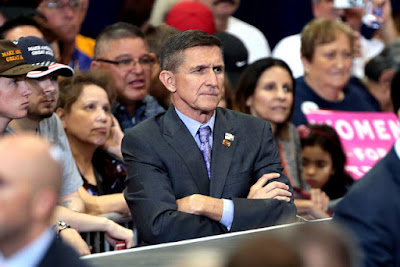 Flynn participated in 19 interviews with investigators in multiple investigations in addition to the Special Counsel's Office (SCO) probe into Russian interference in the 2016 presidential election and any involvement with the Trump campaign. The memo did not elaborate on the others. Marcy Wheeler (emptywheel) speculates they could involve the Ukraine peace deal or meetings with Russians in the Seychelles by Erik Prince, founder of the private security firm Blackwater.

The Tuesday memo is the first of three expected this week. The others are expected to be for Michael Cohen and Paul Manafort.

The addendum section of the memo is heavily redacted because, the memo explains, "the Addendum includes sensitive information about ongoing investigations." More may be revealed when the SCO files documents for Cohen and Manafort. Likely, the redacted sections reference inquiries beyond theirs.

Flynn's early felony plea and cooperation, however, as “one of the few people with long-term and firsthand insight regarding events and issues under investigation by the SCO,” the addendum explains, “likely affected the decisions of related firsthand witnesses to be forthcoming with the SCO and cooperate.”

News of Flynn's cooperation may be sending a signal to the White House because Flynn “provided firsthand information about the content and context of interactions between the transition team and Russian government officials.” The Atlantic's Natasha Bertrand explains:

Flynn was in the national security adviser job for a little more than three weeks before reports surfaced that he had discussed the issue of sanctions with Kislyak during the transition period, despite repeated denials—to Vice President Mike Pence and to the FBI—that the topic had ever come up. Trump has also said he did not know about Flynn’s lies to the FBI when he fired him in February 2017—a point that Flynn was in a position to either confirm or deny to the special counsel.

The Washington Post's Philip Rucker observed last night on "The 11th Hour" how unusually subdued Trump has been lately. He may have reason to be. Don't expect it to last.