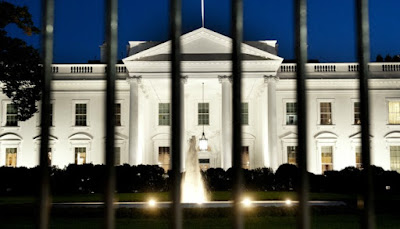 "You want the obvious, you'll get the obvious," Todd Rundgren once sang. And yet, the news is so busy reporting scandalous "breaking news" every day, it misses the obvious.

Breaking news last night: The Trump White House in an unprecedented action overruled two of its career security specialists and granted top secret clearances to Trump son-in-law Jared Kushner, as well as about 30 others, after FBI background checks turned up concerns they posed security risks.

Under discussion was news that the Senate Intelligence Committee would subpoena Michael Cohen. The former Trump lawyer and Trump Organization vice-president was convicted in December to three years in prison for "a 'veritable smorgasbord' of criminal conduct, including making false statements to Congress about the scope and status of a proposed Trump Tower Moscow project," NBC reports:

The move comes a day after Cohen delayed his public testimony before the House Oversight Committee over alleged "ongoing threats against his family from President Trump" and members of his legal team, [Cohen's attorney Lanny] Davis said in a statement Wednesday.

Cohen will testify on Feb. 12, a source with direct knowledge of the matter told NBC News.

Rocah appeared flabbergasted that the sitting president was making public threats, telling Hayes, "It's absolutely mob tactics. I do not think that's hyperbole. I did mob cases cases for 16 years and this is right out of their playbook."

Kevin Corke, @FoxNews “Don’t forget, Michael Cohen has already been convicted of perjury and fraud, and as recently as this week, the Wall Street Journal has suggested that he may have stolen tens of thousands of dollars....” Lying to reduce his jail time! Watch father-in-law!

Because the threats are so open they may be harder for the public to see, Rocah said, offering a hypothetical case. (MSNBC has not yet posted YouTube video of the exchange.)

"If I were prosecuting a mob boss and one of his capos or soldiers was cooperating against him, and the mob boss was out on bail, the capo was out on bail, and they met in the bathroom during trial or somewhere during the court proceeding. And the mob boss said to the cooperating witness, 'You know, I can tell them about your father,' or something like that, and that cooperator came back and told us — whether the father was or was not implicated in criminal conduct — not the point," Rocah told Hayes. "The point is, that cooperator would take that as a threat. Now that's said in private. In that setting, it's more obvious."

Trump is simply doing it publicly because he has no private access to Cohen, Rocah went on, incredulous.

"I also think he's talking to the Department of Justice, who he would like nothing more than to focus on Michael Cohen's father," Rocah added. "The point is, Trump's intent is clear, and a reasonable prosecutor could differ with that as to whether you could actually prove that intent beyond a reasonable doubt ... In my mind, I would charge it."

Kirschner agreed, saying, "This is not just witness tampering. This is President Trump taking a chapter out of the book, 'Witness Tampering for Dummies.'"

"Under [similar] circumstances, as a prosecutor, I would do two things," Kirschner continued. "One, I would immediately invite the father-in-law in and I would say, 'Sir, I'm sorry to inform you we have come into information that we believe constitutes a threat. So, I'd like to lay out the different witness protection options that you have available to you.' The second thing I would do is I would draft an indictment for obstruction of justice for witness tampering."

... efforts to intimidate witnesses, scare their family members, or prevent them from testifying before Congress are textbook mob tactics that we condemn in the strongest terms. Our nation’s laws prohibit efforts to discourage, intimidate, or otherwise pressure a witness not to provide testimony to Congress. The President should make no statement or take any action to obstruct Congress’ independent oversight and investigative efforts, including by seeking to discourage any witness from testifying in response to a duly authorized request from Congress.

Donald Trump has spent a lifetime treating the law as a weapon to wield against opponents, and otherwise as an inconvenience for him to ignore. Career prosecutors know it. Special Counsel Robert Mueller knows it. His whole life, Donald Trump has been able to get away with it.

The wheels of justice turn slowly, sometimes too slowly. But while they turn, every day Donald Trump remains in office he retains the power and the platform to commit obvious crimes in broad daylight using the presidency as a shield. Every day he remains in office, he is a threat to international stability and to the very national security he purports to care about in his ongoing shutdown-tantrum over funding for a wall/fence/barrier on the southern border. Meanwhile, hundreds of thousands of federal workers go unpaid, and government work that goes undone makes Americans everywhere less safe. We're all holding our breaths hoping an airliner doesn't fall from the sky.

But people with the co-equal power to do something about it carry on as if any of this normal. They posture impotently as they watch crimes committed weekly by the president of an erstwhile world power. For the press, it's just more breaking news.