If they don't think it's broke, they won't fix it by @BloggersRUs

If they don't think it's broke, they won't fix it 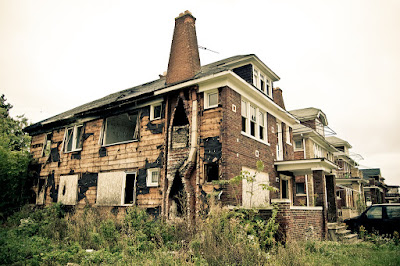 Photo from "City Limits: Urban Decay and the Decline of Detroit" via 'Home, Crisis and the Imagination' Network.

As the sitting president holds government employees hostage over taxpayer funding for a border wall he promised Mexico would pay for, Americans increasingly feel squeezed by an economy that no longer lives up to its promises.

With 800,000 government workers unsure when their next paychecks will arrive, a few have have put out contribution jars, figuratively speaking, beside the online cash register:

Julie Burr, a single mom and contracted government worker from Kansas City, Missouri, created a GoFundMe page two days after Christmas asking the public for help. “I’m losing pay every day that this government shutdown continues,” Burr wrote. “I’ve taken on extra shifts at my 2nd job but it isn’t going to pay rent and all my bills... I’m in panic mode right now.”

Daily Beast reports over 1,000 such sites have cropped up as the Trump shutdown approaches its third week. Most ask for amounts from $1,000 to $5,000, but have received no donations.

President Donald Trump encouraged landlords to be nice "to be nice and easy" on renters late behind on payments during the partial government shutdown he now wants to re-brand a strike. Trump told reporters on Friday he believes he has the support paycheck workers:

"This really does have a higher purpose than next week's pay," Mr. Trump said. "And the people that won't get next week's pay or the following week's pay, I think if you ever really looked at those people, I think they'd say Mr. President, keep going. This is far more important."

One might call him out of touch, with or without the added expletive.

Shalynn Womack is 60 years old and lives with a lot of economic uncertainty. She’s one of a group, she says, that “didn’t get the life we thought being well-educated would provide.” Ms. Womack, who lives in Tennessee, is still plagued by “the sense that I must have done something terribly wrong somewhere along the way.”

The middle class is being squeezed, as Sen. Elizabeth Warren found while still a Harvard law professor. The working poor as well. Costs have risen. Pay scales have not. Jobs have become less secure and come with fewer benefits. The pain and ire of the endless struggle, Quart finds, "politicians didn’t take seriously enough." (See the president's remarks above.) Trump tapped those anxieties in his 2016 campaign, but has done little to alleviate them. Anxious workers are easier to motivate to vote.

Adding to the stress is a culture of secrecy about personal finances that makes people reluctant to admit their struggles, says Anat Shenker-Osorio, author of "Don't Buy It: The Trouble with Talking Nonsense about the Economy." She hears expressions of self-loathing from focus group members convinced their problems are unique, when they are in fact widespread.

As a result, what the electorate doesn’t need to hear are Horatio Alger stories of how candidates worked their way up from humble origins, with the implied moral that anyone can make it in America with enough hard work. These kinds of tales can insidiously lead middle-class people today to blame themselves more for not flourishing.

Instead, the new Congress and candidates of the future should tell voters that it’s O.K. to be mad about being in debt, that this is a savage society we now live in. They could talk about their own experience of debt, be it student or medical, or the debt of someone in their family. (What makes this a bit harder is how unrelatable, and depressing, the wealth of our Congress still is: in 2015, it was majority millionaire.)

The cultural myth that virtuous Americans are those who can rise from poverty to riches on hard work alone makes it easier for wealthy lawmakers to insist people's struggle are not part of a larger systemic failure. Or else, to propose solutions premised on an economy that no longer works for average Americans as they believe it does. (It's working just fine for them.) Republicans and Democrats alike contribute to perpetuating the myth, Shenker-Osorio wrote in a Friday Facebook post:

A solid decade of widely replicated experiments show that belief in economic mobility (ie America as land of opportunity where if you work hard you achieve) inhibits desire for government redress of inequality. Yet, we continue to bow down at the altar of “hard work;” indeed, we campaign on this rhetoric thereby reinforcing our opponents’ lies about those who struggle as culprits of their own misfortune while also undermining our case for a government that actually prevents and solves for the predatory violence of capitalism.

"We all know people who work unbelievably hard and earn almost nothing," futurist Sara Robinson responds. Meanwhile, a rentier class collects the bulk of the country's generated wealth:

Ergo: nobody gets what they deserve any more. The cause-and-effect between hard work and a fair reward is completely broken. This assertion may be powerful; I know that it gets the people I talk to, both right and left, nodding vigorously.

It's also a quick segue from here to a discussion about legal and moral accountability -- places where the lines of reward and punishment are also seen as being hopelessly broken. There are no real consequences for anything, good or ill. And this is a profound, rock-bottom crisis for people's trust in democracy.

Parroting the "hard work" message, even as the way things ought to work, Shenker-Osorio adds, undercuts the lived reality of people who know from hard experience it does not pay off as it once may have, and dampens demand for an economy that works for everyone.

"Show of hands. Who knows someone who 'works hard and plays by the rules' and still struggles year after year?" would be a good opener at a town hall meeting.