Something more to make you shiver by @BloggersRUs

Something more to make you shiver 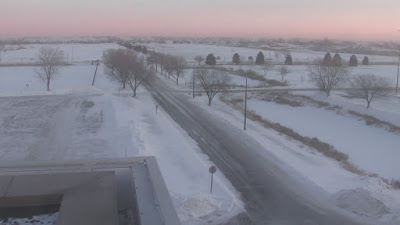 Celsius or Fahrenheit, it doesn't matter in International Falls, Minnesota as I write this. Outside it is -40 on both temperature scales. But there's no wind. Small blessings.

Good thing U.S. adversaries are not feeling an itch to disrupt the power and gas infrastructure across the Midwest just now. A Russian cyberattack in Ukraine turned off the power for a quarter million people in Kiev for hours in December 2015 and again in 2016. The U.S. is not immune.

Director of National Intelligence Dan Coats released on Tuesday his annual Worldwide Threat Assessment this week. In its summary, the report issues warnings that the U.S. utility infrastructure is similarly vulnerable.

"China has the ability to launch cyber attacks that cause localized, temporary disruptive effects on critical infrastructure—such as disruption of a natural gas pipeline for days to weeks—in the United States." (pg. 5)

"Russia has the ability to execute cyber attacks in the United States that generate localized, temporary disruptive effects on critical infrastructure—such as disrupting an electrical distribution network for at least a few hours—similar to those demonstrated in Ukraine in 2015 and 2016. Moscow is mapping our critical infrastructure with the long-term goal of being able to cause substantial damage." (pg. 6)

The Intelligence Community this year has dropped language about the threat being theoretical, the Wall Street Journal's Rebecca Smith told "The Rachel Maddow Show" Wednesday.

"No longer is the federal government describing these things as a hypothetical," Smith said. "Now they are saying the Russians and the Chinese are in our networks and they can shut things down if they wish to."

Moreover, "Moscow and Beijing are working together now than they have in decades," Smith said of Dan Coats's testimony before the Senate Intelligence Committee on Tuesday.

Sen. Ben Sasse (R-Neb.) has jumped in early with proposed legislation, Axios reports, "to criminalize the malicious creation and distribution of deepfakes." Expect the 1st Amendment and civil liberties challenges to be knotty:

But, but, but: Some are less convinced that Congress should step in. David Greene, civil liberties director at the Electronic Frontier Foundation, says making malicious deepfakes a federal crime may hamper protected speech — like the creation of parody videos.

Reality check: New laws would be a last line of defense against deepfakes, as legislation can’t easily prevent their spread. Once the law gets involved, “the harm is so out of the bag and it’s viral,” [University of Maryland law professor Danielle] Citron says. The holy grail, a system that can automatically detect forgeries, is still well out of reach.

Keeping the Russians out of our power grids, social media, or the White House is still out of reach. For that matter, so is keeping an emotionally stunted, deeply uninformed, career con man out of the White House.