The firefighter in the room by @BloggersRUs

The firefighter in the room 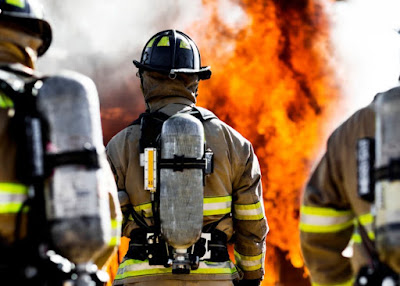 I'm all right, Jack, keep your hands off of my stack. - Pink Floyd, "Money"

Former Starbucks CEO Howard Schultz is getting considerable free press for talking about running for president in 2020. Mostly, he's afraid he'll be running for his tax accountant.

“If he runs against a far-left progressive person who is suggesting 60, 70 percent tax increases on the rich and a health care system we can’t pay for, President Trump is going to get re-elected,” Schultz told ABC’s “The View” on Tuesday.

Developed countries around the world provide universal health care, yet the U.S. cannot afford it, Schultz believes. What he means is members of his tax class don't want to help pay for it. They are "job creators." Isn't that enough? People should be bowing lower.

Exchanges from the World Economic Forum’s annual meeting last week in Davos, Switzerland illustrate the point. Clearly, Michael Dell did not think much of the proposal to set the top tax rate at 70 percent.

Dell preferred talking about his philanthropy.

A later panel entitled "The Cost of Inequality" focused on tax structures and the distribution of wealth. Historian Rutger Bregman criticized the rich for tax avoidance and the hypocrisy of the conference itself.

Bregman observed, “Fifteen-hundred private jets have flown in [to Davos] to hear David Attenborough speak about how we’re wrecking the planet.” And for all the conversation about "participation and justice and equality and transparency," no one addresses the real issue: tax avoidance.

“I feel like I’m at a firefighters’ conference and nobody is allowed to talk about water,” Bregman said. The scale of the climate crisis, for example, is so vast that what we need is much higher taxes on the wealthy. Philanthropy alone will not solve it.

Ken Goldman, former CFO of Yahoo and clearly irritated, asked why there was not more discussion of creating wealth rather than taxing the rich.

Winnie Byanyima, Executive Director of Oxfam International, noted how wealth taxes across the planet have been slashed and even abolished in some places. Loopholes have prevented taxes from being collected and put back into people's health and education. Thus, inequality widens (emphasis mine):

"[Oxfam] also works with poultry workers in the richest country in the world, the United States. Poultry workers. These are women who are cutting the chickens and packing them and we buy them in the supermarkets. Dolores, one woman we work with there, told us that she and her co-workers have to wear diapers to work because they're not allowed toilet breaks ...

Those are the jobs we've been told about, that globalization is bringing jobs. The quality of the jobs matter. It matters. Those are not jobs of dignity. In many countries workers no longer have a voice. They're not allowed to unionize, they're not allowed to negotiate for salaries. So we're talking about jobs, but jobs that bring dignity ... So don't tell me about low levels of unemployment. You're counting the wrong things. You're not counting dignity of people. You're counting exploited people."

Why you need historians at conferences of the rich and powerful. ‘Stop talking about philanthropy, start talking about taxes’. pic.twitter.com/5zXNxJg8ej

It is a mistake to underestimate the power relative status holds over the human animal, whether she/he is the "lowest white man" or a billionaire with a private jet. Status is worth more to them than money (almost). It could be white workers worried that raising the minimum wage will raise the status of black and brown people to rival theirs. Or it could be billionaires feeling disrespected by those beneath them on the social ladder when asked to pay more in taxes.

Venture capitalist Nick Hanauer pointed out the dynamic at work with the rich in 2012. Fellow plutocrats were not happy when at a TED conference Hanauer explained:

Significant privileges have come to capitalists like me for being perceived as "job creators" at the center of the economic universe, and the language and metaphors we use to defend the fairness of the current social and economic arrangements is telling. For instance, it is a small step from "job creator" to "The Creator". We did not accidentally choose this language. It is only honest to admit that calling oneself a "job creator" is both an assertion about how economics works and a claim on status and privileges.

No wonder Alexandria Ocasio-Cortez and other freshman Democrats have Schultz and Dell and Goldman so uneasy. When the rich find they will not bow before the power of the Rich Side, count on it, they will try to turn them.