Bridges not walls by @BloggersRUs 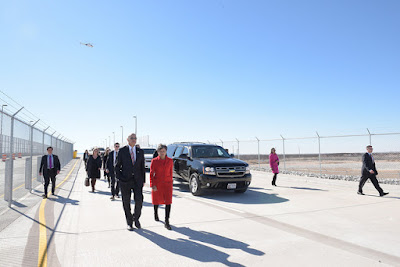 Those Make America Great Again hats were supposed to represent a restoration of the dominant culture white Trump supporters feel slipping away. Lately, the slogan conveys the challenge this country will face once Trump is gone.

On a previous trip to Moscow, a member of the Russian opposition told me, “We used to look up to you guys. Now we see you’re a country no better than any other.”

Getting to that point will require undercutting the Trump rally both as an ego boost for The Donald and for the press attention he craves. El Paso's counter rally this week got under Trump's skin and pointed the way forward for Trump opponents.

Amanda Marcotte analyzed the dynamics at work for Salon. "Racist trolling" is Trump's go-to tactic for whipping up his base. Too often, the first instinct among progressive activists is to stage a protest of Trump's appearance. If things go his way, clashes between the red caps and Trump protesters will give right-wing news outlets days' worth of images to inflame their audience's sense of being victims under assault by non-white and non-real Americans.

Dubbed the "March for Truth" and organized by more than 50 local groups, the counter-rally did much more than protest the hate fest being held by Trump a few blocks away. It uplifted the city with heartening images showcasing the community of El Paso, and rejecting Trump's efforts to demean border residents with racist stereotypes.

The rally, held outdoors with the lovely desert sky of West Texas as a backdrop, created a compelling counterpoint to the ugliness inside the arena where Trump held his rally. Photos of the handsome, charismatic O'Rourke standing with a diverse crowd of cheerful, determined progressives competed successfully in the news cycle with photos of the Trump rally.

And it looked a lot more fun, Marcotte adds.

Trump's repeated patent lies about the relative crowd sizes showed how much of a fail his rally was for him.

Progressives need to pay close attention to this success story. There's little doubt that the backbone of Trump's campaign for 2020 will be his big rallies, which are always meant to be culturally divisive and racially provocative. Trump thrives on sowing distrust and racial animus, winning over voters who may not like him but are vulnerable to propaganda attacks that frame white people as victims of "political correctness." Any images of direct conflict between protesters and the MAGA-hat faithful will be repurposed for this cause.

Counter-rallies, on the other hand, help send a message of rejecting hate and embracing diversity without feeding the Trump propaganda machine.

Watch how Beto O'Rourke does it, speaking of bridges and not walls: