Gypsies, tramps and thieves by @BloggersRUs 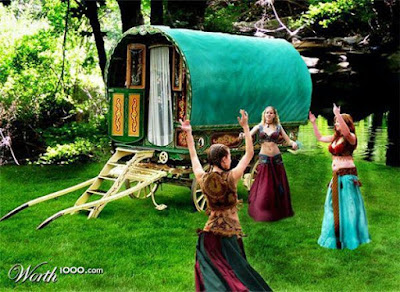 Donald Trump's presidential declaration of a national emergency is as fake as Trump University and a host of other Trump-branded products. Trump's "dictator move," wrote Will Bunch, is something we all expected, yet arrived with "a lot more banality than evil." Bunch examines the ways in which Congress through years of fecklessness has, even in trying to retard the expansion of the imperial presidency, simply enabled it through Republican and Democratic presidencies alike. And here we are.

The real national emergency Republicans see is not the southern border, but 2020. On the line are a presidential election, control of state legislatures that draw maps for state and federal districts (REDMAP 2.0?), plus a chance for Republicans to roll back the blue wave that washed over them in 2018.

"In the 116th Congress, if you’re a Democrat, you’re either a socialist, a baby killer or an anti-Semite," writes Sheryl Gay Stolberg for the New York Times. It may not be as catchy as gypsies, tramps and thieves, but Republican strategists are working up a familiar tune their base can hum:

“Socialism is the greatest vulnerability by far that the House Democrats have,” Representative Tom Emmer of Minnesota, the chairman of the National Republican Congressional Committee, said in an interview, adding that he had also instructed his team to spotlight “all the extreme wild ideas” that Democrats espouse, “on a daily basis, on an hourly basis if it’s available.”

House Republicans have identified 55 Democrats they regard as vulnerable, including many freshmen. Some flipped Republican seats last year, some represent districts carried by Mr. Trump in 2016, and some are in districts held by Republicans until recently. Bruised by their losses last year, Republicans are determined to start earlier and be more aggressive on the offense in 2020, and are hoping to exploit the Democratic presidential candidates’ courtship of the left.

“Washington Republicans are set back now, and all they’re playing on is exaggerations and fear,” Cheri Bustos of Illinois, chair of the Democratic Congressional Campaign Committee, tells the Times. Democrats, she insists, will continue to emphasize reducing health care and drug costs, improving infrastructure, and "and rooting out corruption in Washington." Democrats cannot let Republican negative branding take hold, leaving them climbing out of a hole in 2020.

For once, Sen. Dick Durbin (D-Ill.) offered some useful counter-messaging, saying, “We are not going to abandon socialist policies like Social Security — or is that ‘socialist security,’ is that what they call it?”

Republicans running for anything from president to school board who cries socialism should be asked if they advocate killing "socialist security." See how that flies.

Red-baiting tactics by Republicans have worked in the past, both in sustaining fear in their already fear-saturated base and in making a flinchier generation of Democrats run campaigns on defense. But Republicans are preaching to the conditioned and not offering the remotest possibility for better lives to voters who might be persuadable. As Trump's cotton candy promises of economic renewal turn to dust in his voters' mouths, offering them more bitterness will energize only the most far-gone among them.

The Green New Deal Republicans ridicule may be a crude vision as yet, but it is a vision. Offered by a new generation of Democrats not easily cowed, it is a vision of a future better than the past. Republicans as a party lack any. Nor principles left they have not already sacrificed in a desperate effort to retain power. They have sold their birthright for Trump's white nationalist nihilism and are left to campaign on hidebound tropes left over from the last century.

Republicans who bragged Ronald Reagan won the Cold War should get their heads out of their anti-communism if they expect to lead America in the 21st century.

Reminder that today's evidentiary hearing in #NC09 will be live streamed on https://t.co/3UiDxx0x9v. It begins at 10 a.m. #ncpol #ncga

Links to exhibits are here.