History the hard way by @BloggersRUs 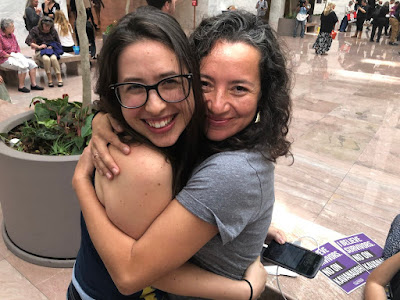 After an elevator confrontation with Sen. Jeff Flake in September, Brian Williams declared on his MSNBC show, “It appears that in the last 24 hours, three women may have changed the course of history. They are Dr. Christine Blasey Ford, Ana Maria Archila and Maria Gallagher.” The latter two, captured in video, had confronted Sen. Jeff Flake (R-Ariz.) at the door of a Senate elevator and pressed on him their stories of sexual assault during the confirmation hearings for Supreme Court nominee Brett Kavanaugh. It seemed their urgent pleas for Flake to relent in supporting Donald Trump's nominee might even change the final outcome.

They did not. Blasey Ford's story of abuse at Kavanaugh's hands while in high school fell on deaf ears. In response to confrontation by Archila and Gallagher, Flake called for a one-week delay in the Senate vote, but ultimately voted to confirm Kavanaugh. Yet, the women will not fade away.

Dr. Christine Blasey Ford has rarely been seen publicly since the Kavanaugh hearings. Democratic Congresswoman Jackie Speier, however, will nominate her for the John F. Kennedy Profile in Courage Award to be awarded in Washington, D.C. in May. Archila, the co-executive director of the Center for Popular Democracy, will attend the State of the Union address Tuesday as the guest of her new congresswoman, Rep. Alexandria Ocasio-Cortez (D-N.Y.).

Members of Congress each bring a guest to the State of the Union address, and many choose to bring one who represents an issue or policy stance they prioritize. Ocasio-Cortez dropped a hint about her guest on Saturday, posting a picture of a “Well Behaved Women Rarely Make History” enamel pin she had picked up at a local shop.

Archila said she feels so much gratitude for Ocasio-Cortez and what she represents: “This idea that we all deserve a country where we can live with dignity, that we have so much wealth that is accumulated in such few hands and she is determined to bring that demand to Congress and to give voice to a demand that I think is very widely shared.”

An immigrant herself, Archila has spent the past two decades working on behalf of immigrant rights in Queens and said she feels a deep connection to Ocasio-Cortez because of their shared commitment to building “grassroots power with people who are excluded from our democracy.”