Subverting democracy for fun and profit by @BloggersRUs

Subverting democracy for fun and profit 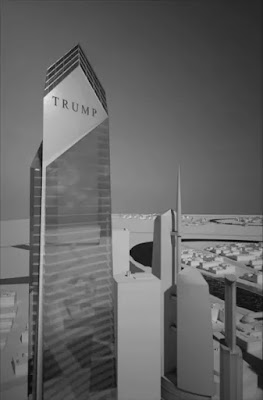 From papa Fred Trump's "All County" boiler deals and the family's other tax-avoidance schemes, it is clear the Trump Organization, as well as a flair for self-promotion, has a talent, let's say, for wringing more money out of real estate through less scrupulous means than rents and licensing agreements. The New York Times and the New York Attorney General's office have only begun to uncover how financially clever, if not criminal, the Trumps have been. Money laundering, tax evasion, and fraud are suspected of being significant contributors to the Trump Organization's coffers.

Underlying the evidence Special Counsel Robert Muller is examining in the Russia investigation are two key motives: money and fame. Power, like that which comes with the presidency, is not only an aphrodisiac for a man obsessed with Himself, but also an accelerant for making him even richer.

Having tasted real power for the first time as president, Trump may find it, too, is now something he wants more of. But it is not likely what first drove him to seek the presidency or the friendship of Russian President Vladimir Putin. It was money and fame. He wanted the tallest skyscraper in Europe to bear his name and make him piles of money.

Masha Gessen reminds readers of The New Yorker that money — Russian Mafia money — is more likely behind Trump World's connections to Russia than politics. As for Putin masterminding a sophisticated scheme for undermining NATO and western democracy by installing a puppet American president, Russian-born Gessen is skeptical. Putin's Russia deserves less credit than Americans give it. She finds the idea that Russian Ethan Hunts pulled off a coup for Putin laughable. "[T]he Kremlin was even more surprised by Trump’s election than was the candidate himself," Gessen writes.

It is using the wrong lens to view Russian interference in the 2016 election as the act of a hostile geopolitical power, Gessen believes. Rather, Russian actions are "an attempt at state capture by an international crime syndicate."

When members of the American media cover the story of Russian meddling, they implicitly portray Russia as a normal state, and the influence operation as an undertaking of the state aimed at furthering Russia’s national interests. This strikes Russians as absurd. By the measure of national interest, the Trump Presidency has been disappointing for Russia...

By the metrics of a Mafia state, though, the Trump Presidency has yielded great results for Russia. A Mafia boss craves respect, loyalty, and perceived power. Trump’s deference to Putin and the widespread public perception of Putin’s influence over Trump have lifted Putin’s stature beyond what I suspect could have been his wildest dreams. As happens in a Mafia state, most of the benefit accrues to the patron personally. But some of the profit goes to the clan. Over the weekend, we learned that the Treasury Department has lifted sanctions on companies that belong to Oleg Deripaska, a member of Putin’s “court” who once lent millions of dollars to Manafort. If a ragtag team employed by or otherwise connected to the Russian Mafia state tried to aid a similar collection of crooks and frauds to elect Trump—as it increasingly looks like they did—then the Deripaska news helps explain their motivations. The story is not that Putin is masterminding a vast and brilliant attack on Western democracy. The story, it appears, is that the Russian Mafia state is cultivating profit-yielding relationships with the aspiring Mafia boss of the U.S. and his band of crooks, subverting democratic institutions in the process.

That view is not likely to catch the public's imagination. "Your mission ... should you decide to accept it" makes a catchier tag line these days than "Follow the money." News organizations selling sizzle will find geopolitical intrigue easier to package than bank transfers and intricate deals involving characters not likely to sit for interviews.

Bálint Magyar, the Hungarian sociologist behind the concept of the “post-Communist mafia state,” tells Gessen that Trump is “like a Mafia boss without a Mafia," whereas Putin “is a Mafia boss with a real Mafia, which has turned the whole state into a criminal state.”

Magyar finishes, “the behavior at the top is the same.” Just harder to make into an action film starring Tom Cruise.