Gerrymandering goes on trial by @BloggersRUs 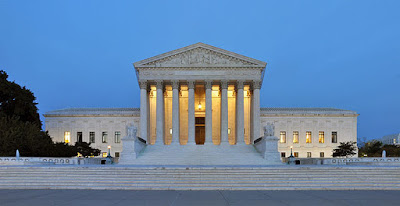 The U.S. Supreme Court on March 26 takes up partisan gerrymandering cases from North Carolina and Maryland. Researchers have provided additional ammunition in support of fair districts.

At issue in the North Carolina case are congressional maps drawn by the Republican-dominated legislature in 2011 and contested and redrawn since then. A three-judge panel from the Middle District of North Carolina last August ordered new maps drawn for the 2020 elections, the last in the current redistricting cycle.

In the Maryland case, Democrats drew the maps. A three-judge panel there found Democrats' mapmakers had targeted Republican voters in Maryland's 6th District and drawn the map to advantage Democrats.

The court has never found that gerrymanders drawn for partisan advantage are so lopsided that they violate the Constitution, and it has in fact avoided doing so.

“Voters nationwide are ready for a ruling from the Supreme Court that finally declares that they come first, not self-interested politicians,” said Paul Smith, vice president of the Campaign Legal Center.

Adam Kincaid, executive director of the National Republican Redistricting Trust, said that “maps that follow traditional redistricting criteria should be free from challenges in federal court.”

The partisans want to keep their weapon.

In Gil v. Whitford last June, the court sent the "efficiency gap" case back to Wisconsin, arguing plaintiffs lacked standing, having not demonstrated sufficient proof of harm (dilution of votes in a specific district). Justice Elena Kagan, however, argued that harm might exist not simply in dilution of votes but in members of the "disfavored party" facing "difficulties fundraising, registering voters, attracting volunteers, generating support from independents, and recruiting candidates to run for office (not to mention eventually accomplishing their policy objectives)." In short, partisan gerrymandering may conflict with freedom of association protected under the First Amendment.

Nicholas Stephanopoulos supports that argument with a study (with political scientist Chris Warshaw) outlined for Slate:

In a nutshell, we found that Kagan was right. A party disadvantaged by gerrymandering fails to contest more districts. The candidates it does nominate have weaker credentials. Donors give less money to these candidates. And voters are less inclined to support them. Moreover, these effects are statistically significant at both the congressional and statehouse levels and hold no matter how gerrymandering is measured. The effects are substantively quite large too. A 1 standard deviation rise in gerrymandering, for example, is linked to about a 5 percentage point drop in the targeted party’s share of campaign contributions. It’s also tied to roughly a 9 point decline in relative candidate quality, as measured by incumbency or having previously won another office.

These results should be helpful to the plaintiffs currently pursuing associational claims around the country. To date, these litigants have relied on qualitative testimony from injured voters, candidates, and party officials. This evidence can now be complemented by our data-driven conclusion that, across many states and years, gerrymandering hinders parties in performing several key functions. Our study provides the methodological rigor that has been absent, so far, from the courtroom.

Freedom caucus chair Rep. Mark Meadows (R-N.C.) will want to watch this case closely. Should the lower court ruling stand and he finds his gerrymandered district fairly redrawn before 2020, he will need more than a "black friend" standing behind him to defend his seat.