Not ready for bovine time by @BloggersRUs

Not ready for bovine time 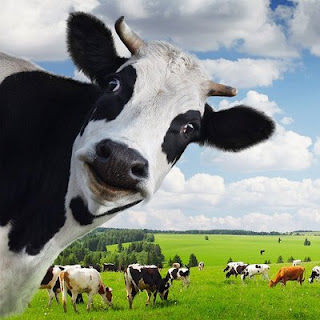 In what observers believe is a publicity stunt, the thin-skinned congressman allegedly filed a $250 million lawsuit in Virginia on Monday that also seeks $350,000 in punitive damages. Nunes accuses the sitting president's favorite social media platform of anti-conservative bias, of trying to "intimidate" him and “interfere with his important investigation of corruption by the Clinton campaign and alleged Russian involvement in the 2016 Presidential Election.”

Nunes further accuses the defendants, jointly and severally, of “negligence, defamation per se, insulting words, and civil conspiracy" over such tweets as this:

Describing itself as "Hanging out on the dairy in Iowa looking for the lil’ treasonous cowpoke," the site throws shade at political lore about Nunes' California dairy farming roots — the farm is "long gone," the cows are in Iowa. Since "Devin Nunes’ cow" has been live for over a year, and since the Washington Post finds no record of the actual filing, this may indeed be a stunt by Nunes:

“This was an orchestrated effort,” Nunes said during an interview with Fox’s Sean Hannity on Monday. “People were targeting me.”

Nunes promised Hannity this suit would be “the first of many,” etc., etc.

One worries, however, that Nunes and his favorite president might be influenced by a recent law signed by the president's favorite autocrat:

Russian President Vladimir Putin has signed a controversial set of bills that make it a crime to “disrespect” the state and spread “fake news” online, Russian media reported on Monday.

The bills amending existing information laws overwhelmingly passed both chambers of Russian parliament in less than two months. Observers and some lawmakers have criticized the legislation for its vague language and potential to stifle free speech.

The legislation will establish punishments for spreading information that “exhibits blatant disrespect for the society, government, official government symbols, constitution or governmental bodies of Russia.”

The Russian law bypasses the courts and allows prosecutors to block news sources directly, Maria Snegovaya, an adjunct fellow at the Center for European Policy Analysis, told the Washington Post in an email:

“In other words, it significantly expands the repressive power of Russia’s repressive apparatus. This may be compared to the Stalin’s Troika, a commission of three for express judgment in the Soviet Union during the time of Joseph Stalin who issued sentences to people after simplified, speedy investigations and without a public and fair trial,” she added.

At this stage of the Putin-Trump bromance, it is unclear who inspired whom in promoting "fake news" as any information dictators and autocrats dislike. But Putin's shiny, new attack on free speech is the stuff of Donald Trump's wet dreams.

Trump has called for a loosening of American libel and defamation law before, and as recently as last weekend called for a federal investigation into Saturday Night Live for telling jokes at his expense. In that context, the Nunes stunt on Monday may be another attempt by Nunes to curry favor with his cult leader.

California Democrat, Rep. Eric Swalwell Jr., is on alert, and so should you be:

I will do everything physically possible — march with my feet, shout from my lungs, and out-maneuver with my mind — to stop this from happening in America. But you better believe @realDonaldTrump will try. And I know you’re with me. Not on our watch. https://t.co/OVfKdVGQXc