White fragility is a global terrorist threat by @BloggersRUs 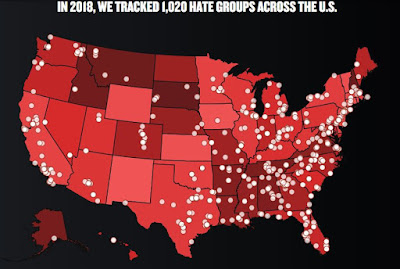 Fighting them over there so we don’t need to fight them over here was never terribly sound policy. But it was in the wake of September 11, 2001 what launched George W. Bush's Global War on Terror (GWOT). One of the prime failures of the formulation was who we meant by "them." Them changes every few years, doesn't it? Them was fascists. Them was communists. Them might be "outside agitators" demanding equality of rights across the South, or hippies challenging the war in Vietnam. Them was Muslim extremists. Them is the "invaders" at the U.S. southern border or at New Zealand's shores.

There is now little doubt that white supremacy is an international terrorist threat stretching from Christchurch to Pittsburgh and extending out in every direction. It runs on a parallel track with the rise of a xenophobic rightwing nationalist politics that is conspicuously successful in a number of putatively democratic nations. Liberal democracy is under attack and, like any revolution, this one has both a respectable political front and a violent auxiliary that operates on its own imperatives ... This is the everyday al Qaeda of the angry white soul, and it's growing.

That respectable political front in this country is not respectable at all, and in fact the subject of multiple criminal investigations. Just not for inspiring white nationalist violence here and abroad.

Robin DiAngelo, author of “White Fragility,” considers "to be white is to see oneself outside of race, to see oneself as a unique, special individual exempt from the forces of socialization." But DiAngelo is speaking to everyday white people oblivious to the privileged place whiteness gives them in western culture, people discomfited at having it pointed out.

But white supremacists are hyper-aware of their whiteness and hyper-threatened by perceived challenges to it. As much as they hate the Other, they cannot maintain their own identity without a permanent underclass by which to compare their superiority. There must be a treat, yet the threat must be eradicated. Numbers don't matter. There is no threshold below which the Other that defines them is tolerable, writes Zak Cheney-Rice:

The Muslim population in New Zealand is negligible — less than 50,000 in a country of 4.794 million. Its foreign-born Muslim population is even smaller, at roughly 75 percent of the total Muslim population. Even if those figures doubled, tripled, quadrupled, or quintupled, the killer’s mathematical rationale would not hold up. They were an existential threat to him regardless of how many of them there were — leaving observers to confront what this is really about, the same lie that has fueled white supremacist thought for centuries. It is the lie that presumes the genetic purity and innate superiority of a people who centuries ago decided they were white and the rest of us were less than white.

Thus, "consumed by alt-right conspiracy theories and historical nonsense," white supremacists see themselves being overrun by non-white invaders bent on replacing them at the apex of western social structure. They have constructed a fictional, all-white Europe of the Middle Ages, as celebrated in the symbology and names displayed on the garb and weapons of the Christchurch shooting suspect.

“They’re using their messed-up concept of the Middle Ages as a recruitment tool,” Paul B. Sturtevant, author of “The Middle Ages in Popular Imagination,” told the Washington Post:

“The idea that [medieval societies] are this paragon of unblemished whiteness is just ridiculous,” Sturtevant said. “It would be hilarious if it weren’t so awful.”

Federal prosecutors must now "pursue investigations into white nationalist groups with the same zeal that has been applied to radical Muslim terrorist organizations," insists Christopher Dickey at Daily Beast.

But for years, right-wing politicians here winked at white supremacists in their midst and condemned Democratic politicians reluctant to at vilify an entire world religion under right-wing rubric of "radical Islamic terrorism." Don't expect them now to challenge their radicalizer-in-chief for not doing the same and deploying American law enforcement to combat the global and domestic threat of white supremacist violence with the same zeal with which he prosecutes non-white, Central American refugees.