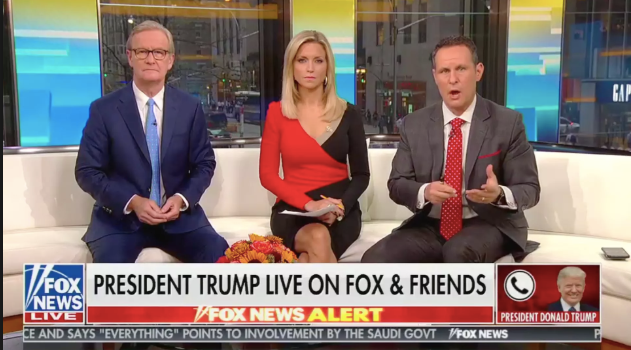 Tom Sullivan wrote about the new Jane Mayer Blockbuster in the New Yorker this morning. We already know much of it but it delves deeply into the whole cross-culture between Fox and the GOP and the White House in detail and that really fills out our understanding of the phenomenon.

Matt Yglesias puts this into context. This is not a benign situation at all:

Specifically, by exploiting semi-random variation in Fox viewership driven by changes in the assignment of channel numbers, they find that if Fox News hadn’t existed, the Republican presidential candidate’s share of the two-party vote would have been 3.59 points lower in 2004 and 6.34 points lower in 2008. Without Fox, in other words, the GOP’s only popular vote win since the 1980s would have been reversed and the 2008 election would have been an extinction-level landslide.

And Fox is not the only thing out there. The Sinclair Broadcast Group is not a television network in a traditional sense. Instead, it’s a company that owns a disparate bunch of local television stations affiliated with all four major networks. But Sinclair does exert centralized control over the “local” television news broadcasts. And research from Martin and his colleague Josh McCrain found that when Sinclair buys a local station, its local news program begin to cover more national and less local politics, the coverage becomes more conservative, and viewership actually falls — suggesting that the rightward tilt isn’t enacted as a strategy to win more viewers but as part of a persuasion effort.

It would be ridiculous, of course, to argue that absent conservative propaganda broadcasting, Republicans would never win an election. What would happen, instead, is that in order to avoid constantly losing, Republicans would need to do more to bring key aspects of their policy agenda in line with public opinion and display less indifference to the prevalence of scandal-plagued individuals in party leadership. The conclusion, however, remains the same: Fox appears to be a decisive influence in making the Republican Party as currently constituted an electorally viable entity. And these studies are based on Fox's past — according to Mayer, the network has only become more propagandistic since the 2016 election.
Taking propaganda broadcasting seriously

But this relationship is rarely taken seriously enough in the analysis of American — or even global — politics.

It’s commonplace, for example, to treat the contemporaneous and narrow electoral victories of Donald Trump and Brexit in the United States and United Kingdom as revealing some important, deep-seated truth about the nature of global capitalism. An alternative explanation, however, is that Rupert Murdoch is a very powerful person in both US and UK media and he intervened decisively to put the Trump and Brexit phenomena over the top.

If true, lancing the boil of this particular destructive form of nationalism requires less a broad rethinking of the foundations of politics and more specific focus and the ability of a handful of propagandists to decisively alter the course of events. The past two or three years have seen a very intense social and political focus on the phenomenon of “fake news” spreading digitally on social media platforms. But while fake news is obviously not desirable, the evidence for its practical impact has been relatively slight compared to the evidence that mass opinion has been manipulated by traditional television broadcasting.

Between this and the right's social media bubble, we have a big problem. I don't know the solution but it's important hat we recognize that this media infrastructure is going to exist long after Trump is gone.