"I know nothing about Wikileaks, it's not my thing" --- Donald Trump, lying as usual

"I know nothing about Wikileaks, it's not my thing" --- Donald Trump, lying as usual


I'm unclear about the Assange charges at this point but to the extent they chill freedom of the press obviously it's bad. From what I understand so far the bulk of the charges are for conspiracy to hack but there is at least one that charges him with deleting chat logs which is simply good journalistic practice. So we'll have to see how this plays out.


Unsurprisingly, whatever good feelings I had about Wikileaks disappeared some time back and not just because of Assange's grotesque behavior, during the election campaign: 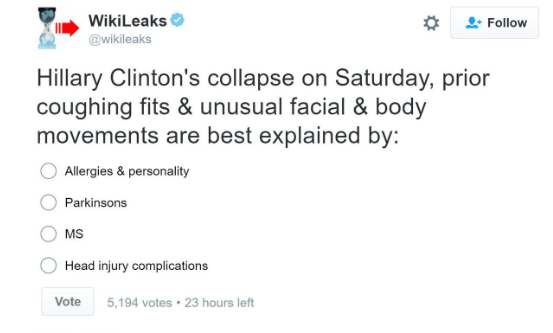 He also released personal information on thousands of innocent Turkish women, putting them in harms way. It has been a long time since Assange was operating as an honest broker for radical transparency. It's very, very hard to feel sympathy for him.
You have to love this though:

Wow - MSNBC put together video of every single time Trump mentioned @wikileaks during final month of the 2016 campaign.

The problem is, Bill, I would hammer it, but the press doesn’t pick it up. The press is hardly even talking about Wikileaks. You now that. Wikileaks is amazing. The stuff that’s coming out, it shows she’s a real liar. She said, well, you have to say to the public and you have to say to your donors different things. Okay? The press doesn’t even pick this stuff up. You look at, where are you seeing it? [10/11/16]
Trump: “Wikileaks, some new stuff, some brutal stuff”

We have all of these new charges, did you see it just came down today? Wikileaks, some new stuff, some brutal stuff. I mean I’d read it to you but to hell with it trust me it’s real bad stuff. The speech transcripts contain scandalous revelations about Hillary Clinton that disqualify her from seeking public office. And she is. [10/10/16]
Trump says Wikileaks proves Clinton should not “be able to run for president”

No one who supports open borders should be able to run for president because we won’t have a country. And buy the way weeks ago I called out Hillary Clinton for supporting open borders and the media said I was wrong. Now I’ve been proven right. Where is the media rushing to correct these false stories? Because in the Wikileaks it was all about open borders. [10/10/16]
Trump: “Wikileaks. I love Wikileaks”
Wikileaks, I love Wikileaks. And I said write a couple of them down. Let’s see. During a speech crooked Hillary Clinton, oh she’s crooked folks. She’s crooked as a three-dollar bill. Okay here’s one. Just came out. ‘Lock her up’ is right. [10/10/16]
Trump: “You see so much from these Wikileaks. You see so much. There’s so much.”

It’s just the latest evidence of the hatred that the Clinton campaign really has for everyday Americans and you see, and you see so much from these Wikileaks. You see so much. There’s so much. [10/11/16]
Trump: “I’ll tell you this Wikileaks stuff is unbelievable…you gotta read it.”

I’ll tell you this Wikileaks stuff is unbelievable. It tells you the inner heart, you gotta read it and you gotta maybe get it because they’re not putting it out. They want to put it out but they can’t do that because without the media and without the press Hillary Clinton would be nothing. She’d be nothing. Zero. [10/12/16]
Trump: “One of the big advantages of me having a rather large microphone… is that I can talk about Wikileaks”

And one of the big advantages of me having a rather large microphone, and meaning a lot of people are listening, is that I can talk about Wikileaks and we are live, it’s amazing. Boom boom boom. I think they are just turning them all off. Watch, you go home, they’ll say, ‘why did it end so abruptly?’ [10/12/16]
Trump: “You hear this? Wikileaks. Big stuff but the press does not report it”


She would be the most dishonest and the most corrupt person ever elected to high office. The Wikileaks emails show the Department of Justice fed information to Clinton, now think of this. She is under investigation. [10/12/16]
Trump: Wikileaks reveals “the massive international corruption of the Clinton machine”

And so now we address the slander and libels that was just last night thrown at me by the Clinton machine and New York Times and other media outlets as part of a concerted, coordinated, and vicious attack. It’s not coincidence that these attacks come at the exact same moment and altogether at the same time as Wikileaks releases documents exposing the massive international corruption of the Clinton machine, including 2,000 more emails just this morning. [10/13/16]
Trump: “The sad part is we don’t talk about Wikileaks because it’s incredible.”

It’s a total setup. Now suddenly after many, many years, phony accusers come out less than a month before one of the most important elections in the history of our country. It also comes at a time as Wikileaks unveils horrible, horrible things about Hillary Clinton but they’d rather talk about this. [10/14/16]
Trump on Wikileaks: “There’s bad, bad stuff [the media is] not covering”

The Hillary Clinton documents released by Wikileaks make more clear than ever, and they don’t cover them the way they’re supposed to be covering. There’s bad, bad stuff they’re not covering. [10/15/16]
Trump: “Wikileaks came out with lots of really unbelievable things”

And by the way, Wikileaks came out with lots of really unbelievable things. Just minutes ago. In fact, I almost delayed this speech by about two hours, it’s so interesting. But I decided you’re more important than anybody, okay? It’s all a big, beautiful fraud. [10/15/16]
Trump: The media “will not talk about Wikileaks”

The media is an extension of the Clinton campaign as Wikileaks has proven, and they will not talk about Wikileaks. [10/17/16]
Trump: “Boy, that Wikileaks has done a job on her, hasn’t it?”

I said open border, and she, open border, I don’t want open border but she, turned out she wanted open borders. Boy, that Wikileaks has done a job on her, hasn’t it? [10/20/16]
Trump: “We’ve learned so much from Wikileaks”

“We’ve learned so much from Wikileaks. For example, Hillary believes it’s vital to deceive the people by having one public policy — [ booing ] — And a totally different policy in private. That’s okay. [10/20/16]
Trump: “We love Wikileaks. Wikileaks.”

A terrible Wikileaks was just released moments ago, which you’ll go home, you’ll see it, and you’ll be sickened by it and that she can get away with what she’s getting away with. [10/25/16]
Trump: “Wikileaks revelations have exposed criminal corruption at the highest levels of our government”

The Wikileaks revelations have exposed criminal corruption at the highest levels of our government. [10/29/16]
Trump: Wikileaks show “a rigged system with more collusion, probably illegal”

Out today, Wikileaks just came out with a new one just a little while ago it’s just been shown that a rigged system with more collusion, probably illegal, between the Department of Justice the Clinton campaign and the State Department, you saw that. The emails show that the assistant attorney general who’s involved in the investigation has been feeding information directly to John Podesta and the Clinton campaign, can you believe that. She shouldn’t be allowed to run. [11/02/16]
Trump: Wikileaks revealed Clinton was “completely jeopardizing the national security of the United States”

Just today we learned Hillary Clinton was sending highly-classified information through her maid. Did you see? Just came out a little while ago. Who, therefore, had total access to this information, completely jeopardizing the national security of the United States. This just came out, Wikileaks. We need a government that can go to work on day one for the American people. That will be impossible with Hillary Clinton, the prime suspect in a far-reaching criminal investigation. [11/05/16]