Promoting "the foreign menace" by @BloggersRUs 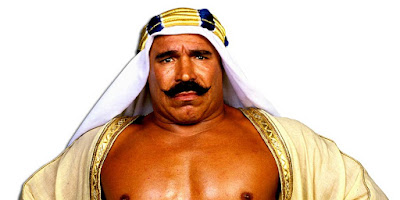 It is never clear how much the sitting president's Trumpish (is that a word now?) behavior is WWE theater for atavist fans or the product of his genuinely warped soul. Accidents do happen in wrestling, a.k.a., sports entertainment, and performers sometimes get injured. But that's never the plan. With Donald Trump, it is hard to tell the difference.

His incitement to violence, one can argue, has already provoked killings in Pittsburgh. It provoked an aborted spate of bombings against his critics across the country. Hate crimes are up 226 percent in counties that hosted Trump political rallies. Plus, death threats against prominent players known in wrestling tradition as "the foreign menace." In wrestling, fans love to hate the foreign Others, with their strange dress and un-Real American™ accents. All-American wrasslin' heroes shine the brighter for not fighting dirty. Not like Them.

In Trump's America, however, fighting dirty is what fans come to cheer. What once was a democratic republic looks more like an arena event where Truth, Justice, and the American Way are for weaklings and losers. Vanquishing the Others and/or banishing those his fans have been trained to fear is all that matters. Their favorite promoter is happy to oblige. He'd throw a few foreign menaces to the lions in person if not for his squeamishness at seeing blood. But he'll sponsor the spectacle from afar. Not, of course, without teasing it relentlessly first to maximize the audience.

Members of Congress have a duty to respond to the President’s explicit attack today.@IlhanMN’s life is in danger. For our colleagues to be silent is to be complicit in the outright, dangerous targeting of a member of Congress.

We must speak out.

And so he has:

President Trump on Friday tweeted a video attacking Rep. Ilhan Omar (D-Minn.) for the way she phrased a reference to 9/11, adding fuel to a controversy that has swelled in Republican political circles this week.

The thing is as vile as you've come to expect. It takes a poorly phrased line of a speech on Islamophobia and makes it an apologia for Islamist terrorism. Zak Cheney-Rice writes at New York magazine:

Such an ungenerous interpretation of her remarks is only possible if one is inclined to believe that Omar sympathizes more with terrorists than her murdered countrymen. That she spoke them in the course of decrying Islamophobia makes it especially disconcerting that her political opponents would decontextualize them to fan the flames — she receives regular death threats on the basis of her faith, including from one New York man who threatened recently to “put a bullet in her fucking skull.”

This man and the rest have crossed over from WWE kayfabe to real violence. In the land of the fear and the home of the knave, there is no longer any distinction.