Refuge of scoundrels by BloggersRUs 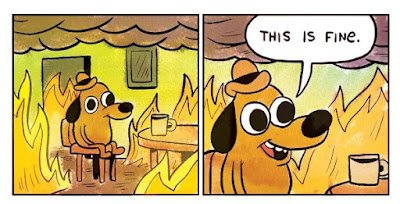 Such times feel like a battle for America's soul. Those who have one wonder: Does the country? Half the country elected a president who seems devoid of one. His party sold its soul for tax cuts for the rich and control of the courts for a generation.

"Patriotism is the last refuge of a scoundrel," Samuel Johnson said famously. By which we might assume he meant false patriotism, not the genuine article. For years, I argued Republicans' flag-waving, constitution-clutching, and America-hell-yeah posturing reflected a patriotism a mile wide and an inch deep. Lately, that characterization seems too generous.

Unwilling to abandon an unpopular agenda and facing a shrinking political base, Republicans refuse to bring their extremists to heel or to moderate an extremist agenda. Instead, in Donald Trump they double down. They have, Damon Linker argues, adopted asymmetric warfare, the classic approach a weaker force adopts to achieve and maintain power. They play dirty:

In the case of Trump, it has even included a willingness to rely on help from a foreign government's intelligence service. But we can also see the asymmetrical approach at work in the right's somewhat less flamboyant but still over-the-top efforts to promulgate a hyperbolic caricature of the opposition — efforts that are guaranteed to continue and intensify as the 2020 contest heats up. So the Democrats are bound to be portrayed as deranged socialists maniacally devoted to turning the U.S. into Venezuela, anti-religious lunatics who despise authentic Christianity and hope to wield state power to stamp it out, baby-killing abortion fanatics who swoon at the thought of infanticide, and anti-Israel bigots who not-so-secretly admire Islamic terrorists.

Facing the G.O.P., we have a Democratic Party still committed to traditional politics Republicans have abandoned except as theater. Facing creeping authoritarianism in an administration with no regard for the rule of law, Democrats on the whole and among their presidential candidates seem determined to move ahead as if this is all fine. Let's have another election. Once the adults are back in charge, we will return government to working for the common good.

That's because most Democrats genuinely, earnestly want to do things that they think will make the country better. They have a vision of the common good and a long list of policies they think will help to achieve it. That's what motivates them, not just the prospect of smiting the right. Republicans increasingly define themselves by ferocious anti-liberalism, but Democrats affirm far more than anti-conservatism.

Yet, the Democrats' approach feels more like the in-charge adults are trying to keep the children distracted and calm as the house burns down around them.

The president of the United States betrayed the country, Paul Krugman insists. No matter. He gave the big-money men what they wanted. They will stick with him even knowing Trump won office "in part thanks to Russian aid, that his financial entanglements with foreign governments pose huge conflicts of interest and that he consistently shows a preference for dictatorships over our democratic allies."

It should be no surprise then that Republicans who abandoned the U.S. with their businesses have abandoned its principles as well. They can, as a paratrooper friend once said, "out-ass the AO,"* before it burns to ash. With private jets and yachts, they even have their own transportation.

First, anyone expecting bipartisanship in dealing with the aftermath of the Mueller report — in particular, anyone suggesting that Democrats should wait for G.O.P. support before proceeding with investigations that might lead to impeachment — is being deluded. Trump is giving the Republican establishment what it wants, and it will stick with him no matter what.

Second, it’s later than you think for American democracy. Before 2016 you could have wondered whether Republicans would, in extremis, be willing to take a stand in defense of freedom and rule of law. At this point, however, they’ve already taken that test, and failed with flying colors.

“You don’t even have to be convicted of a crime to lose your job in this constitutional republic if this body [the Senate] determines that your conduct as a public official is clearly out of bounds in your role ... because impeachment is not about punishment. Impeachment is about cleansing the office. Impeachment is about restoring honor and integrity to the office,” Graham passionately argued for impeaching Bill Clinton two decades ago. Now Graham is Trump's poodle.

Democrats hoping Americans will come to their senses and return them to power cannot cower like that in the face of Trumpish assaults. Or even self-censor. Rather than boldly charge ahead, Old Guard Democrats have for decades second-guessed themselves into irrelevancy. "What will the Republicans say?" they ask for fear of drawing Republican fire. The times require they charge into it.

Robinson replies, "Trump will mount this attack no matter what Democrats do. And strictly as a matter of practical politics, the best defense against Trump has to be a powerful offense."

That was Col. Chamberlain's choice at Little Round Top. Even without ammunition.

Update: Take a look at Trump's morning tweets (a dozen so far). Do they make smoke alarms for nation states?